Skip to main content
Crisis at the U.S. border

In recent weeks, the United States’ new immigration policy has separated thousands of immigrant and refugee children from their parents as families seek refuge from persecution or violence. Here’s what you need to know about the situation.

Why has the U.S. been separating immigrant families?

In early April, the U.S. government formally introduced a “zero-tolerance” policy to prosecute all individuals apprehended between official U.S. ports of entry, including asylum seekers, in direct violation of U.S. international treaty obligations. When families were apprehended crossing the border outside an official port of entry, parents were sent to federal prison and their children were placed in government custody at separate detention facilities. This practice resulted in a de facto family separation policy. More than 2,000 children were separated from their parents at the U.S.-Mexico border between April 19 through May 31 alone.

Does the new executive order end family separation on the U.S. border?

The executive order signed on June 20 is not a solution for families seeking much-needed asylum and does nothing to reunite the thousands of children who have already been separated from their parents at the border.

“The administration is replacing one form of cruelty with another,” said International Rescue Committee Vice President Hans Van de Weerd. "Central American children, and their families, have suffered enough.”

The order proposes detaining children and their families for the length of their proceedings—which can often take many months or over a year—despite legal obligations to release children promptly under U.S. law.

Furthermore, the executive order will continue to criminalise asylum seekers, in a break with international law. It will also separate family members where there isn't a "legal parent-child” relationship—with a lack of clarity of how this will be established.

What happens to the children?

Children are placed in government custody, with the goal of releasing them to family sponsors or, for certain younger children, placing them in foster care pending the decisions of their immigration court cases. Child detention centers are filling up as children who have been separated from their parents are staying longer than children who were detained crossing the border alone. Detention centers are ill-equipped to handle young children and the broad range of ages resulting from family separations.

The IRC is very concerned about the welfare of children separated from their families and, in particular, about the psychological impact separation has on children. There is no clear procedure for parents who have been detained or deported to follow to track their children or find out how they will be reunified.

Who is crossing the U.S.-Mexico border?

People who are crossing the U.S. border are fleeing from rampant gang violence, including the recruitment of children and other forms of persecution perpetrated in Central America, including widespread violence against women. Many have credible asylum claims and the legal right to have their cases heard without being criminalised or, in the cases of families, without having their children taken from them.

Why are families coming to the U.S. for asylum?

Since 2014, hundreds of thousands of children and families have fled to the U.S. because of life-threatening gang activity in El Salvador, Guatemala and Honduras. Levels of violence in these countries are akin to those in the deadliest war zones around the world.

In 2016, El Salvador and Honduras were two of the top 10 countries not engaged in armed conflict with the highest murder rates of women. In 2017, more than nine women and girls were killed in El Salvador every single week.

People fleeing their homes in El Salvador, Honduras and Guatemala often seek safety elsewhere within their countries, to no avail. Families embark on the journey to the U.S. because they are absolutely desperate, for such trips are fraught with danger— including shocking levels of rape and sexual violence along the route.

Crossing an international border to seek asylum is legal. International refugee law—which the U.S. helped create in the wake of World War II—recognises the reality that refugees often aren’t in a position to follow regular procedures.

For that reason, the 1951 Refugee Convention prohibits states from penalising asylum seekers based on their manner of entry. Moreover, several human-rights organisations have documented systemic turn backs at official U.S. ports of entry. In other words, even when asylum seekers have made their way to an official U.S. border crossing and asked for asylum, officials have turned them back into Mexico, in violation of both U.S. treaty obligations and U.S. law. 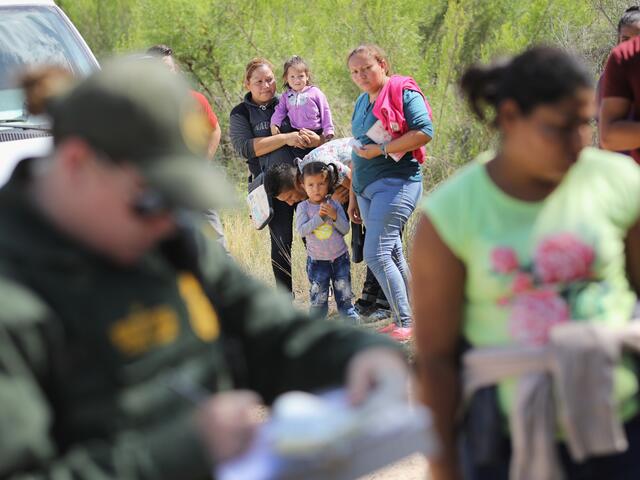 How is the IRC helping children fleeing from Central America?

The IRC responds to humanitarian crises and helps people whose lives and livelihoods are shattered by conflict and disaster. We have been assisting children from Central America who have come to the U.S. to seek protection on their own, often with the intention of reuniting with family members residing in the U.S. Our work includes:

Before the U.S. government ended the Central American Minors Resettlement Program in November 2017, the IRC also assisted families in the U.S. to apply for refugee status for their children in Central America, preventing the need for them to take the dangerous journey on their own.

As a result of the new U.S. “zero-tolerance” policy, there are now thousands of unaccompanied children—many just babies or toddlers—who have been taken from their parents at the border. Through our work in the U.S. and around the world, the IRC is deeply familiar with the impact of toxic stress on small children and stands in opposition to the administration’s cruel policy to separate children from their parents.

The IRC was one of the first international organisations to declare a humanitarian crisis in El Salvador. Every year, an estimated 200,000 to 300,000 Salvadorans flee their homes in search of safety.

Working closely with the Salvadoran government and other local organisations, we are providing lifesaving information services to people uprooted by violence as well as emergency cash relief and assistance to high-risk people seeking shelter and safety.

Demand that your congressional representative protect vulnerable families who are seeking asylum in the U.S.

Educate family and friends on the facts of legal asylum by sharing this story on Facebook or Twitter.

Donate now to help us support unaccompanied children, families seeking asylum and refugees hurt by this administration’s unjust policies in the U.S. and elsewhere.