Families escaping gang violence and persecution in Guatemala, Honduras and El Salvador have undertaken a dangerous journey to seek safety in the United States.

People arriving at the U.S. border have the right to request asylum without being criminalised, turned back, or separated from their children. Here’s how the process works:

Asylum is a form of protection granted to individuals who can demonstrate that they are unable or unwilling to return to their country because of persecution or a well-founded fear of persecution on account of:

The right to seek asylum was incorporated into international law following the atrocities of World War II. Congress adopted key provisions of the Geneva Refugee Convention (including the international definition of a refugee) into U.S. immigration law when it passed the Refugee Act of 1980.

An asylum seeker is someone who has fled their home in search of safety and formally applied for legal protection in another country. Because he or she cannot obtain protection in their home country, they seek it elsewhere. Asylum seekers may be of any age, gender, socio-economic status, or nationality—though the majority come from regions of the world that are suffering from conflict, disaster, and weak rule of law.

To be granted asylum, one must meet the definition of a refugee. However, international law recognises that the refugee status determination process can be lengthy and complex. Therefore, asylum seekers should receive certain protections before a state has officially recognised them as refugees. Asylum seekers begin their process either at the U.S. border or within the U.S.

"A refugee is inherently a refugee even if a government hasn’t yet made that determination," says IRC immigration director Olga Byrne. "If you meet that definition and you’re fleeing danger, you should not be penalised for your manner of entry, and you should not be turned away at the border to a country where you’d face persecution."

Yes, seeking asylum is legal. Asylum seekers must be in the U.S. or at a port of entry (an airport or an official land crossing) to apply for, or request the opportunity to apply for, asylum. "There’s no way to ask for a visa or any type of authorization in advance for the purpose of seeking asylum,” says the International Rescue Committee’s director of immigration, Olga Byrne. “You just have to show up."

How do people seek asylum at the border?

Asylum seekers who arrive at the U.S. border are typically placed in either immigration court removal proceedings, where they will have a future opportunity to make their case for asylum before an administrative judge, or in expedited removal proceedings, which allow border agents to order an individual deported from the U.S. without a hearing before a judge.

However, under U.S. law, if a person in expedited removal states a fear of return to their home country or intention to apply for asylum, they will be referred for a credible fear interview conducted by a trained asylum officer within U.S. Citizenship and Immigration Services (USCIS). 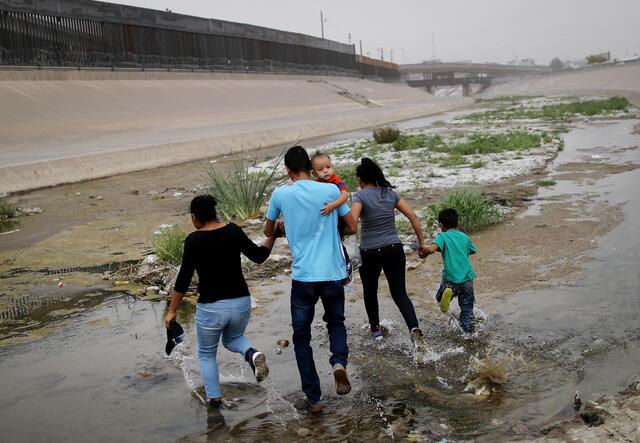 Every nation has the right to control its border. Both U.S. and international law also provide for the safe and legal movement of vulnerable people and the right to seek asylum.
Photo: Mario Tama/Getty Images

A Central American girl holds a book as others traveling in a caravan climb the Mexico-U.S. border fence in an attempt to cross to San Diego County.

The asylum seeker must prove to the officer that there is a “significant possibility” he or she is eligible for asylum, and must also be subject to a credibility assessment. If the officer makes a positive finding, the asylum seeker is referred to an immigration court where they will have the opportunity to apply for asylum before an immigration judge. If the individual does not meet the credible fear screening standard, he or she can be deported.

Some individuals who are already in the U.S., such as those who may have entered on a tourist visa or other temporary visa, may also apply for asylum. In those circumstances, the process for asylum varies.

How many people are granted asylum in the U.S.?

“Asylee” is the term used in the U.S. for people who have been granted asylum. Last year, 35,502 individuals were granted asylum. According to U.S. immigration law, a person granted asylum is legally allowed to remain in the U.S. without fear of deportation. They qualify to work, travel abroad, and apply for their spouse or children under the age of 21 to join them.

Having a legal representative significantly increases the likelihood of being granted asylum. One study found that asylum seekers who had submitted an asylum application before the immigration court were five times more likely to be granted asylum if they had a lawyer.

Where do asylum seekers in the U.S. come from?

At the start of 2019, Central Americans were among the largest groups of people to apply for asylum in the U.S.

People living in Central America’s Northern Triangle region—Honduras, Guatemala and El Salvador—are enduring violence akin to a war zone. Many Central Americans fleeing to the U.S. border have travelled together in caravans for safety.

“The hardest part about living in El Salvador is the violence,” says 23-year-old Valentina, who fled to the U.S. after her family was threatened by gangs. “This is what makes life hard, because you leave your house and you don’t know if you’ll return. So yes, this is a war.”

People fleeing their homes often seek safety elsewhere within their countries, moving multiple times to no avail. They embark on the journey to the U.S. because they are absolutely desperate and must escape, despite the dangers of the journey.

“Currently there is no place scarier than their homes,” says Meghan Lopez, who leads the IRC’s work in El Salvador.

While the administration is saying people should come here legally and follow a legal process, it's making it impossible to do so.

How has seeking asylum changed under the Trump administration?

Rather than offering safe haven, the U.S. administration continues to issue policies—often in violation of both U.S. and international law—that block people from claiming asylum and create standards that depart from decades of precedent. These new policies make obtaining asylum more difficult in certain cases, separate families, and forcibly return asylum seekers—including women and children—to Mexico to wait for their claims to be processed. These developments are as harmful as they are illegal.

Under federal law and international treaty obligations, the U.S. cannot force someone to go to a country where they will be in jeopardy of persecution or torture. There are concerns about whether Mexico can provide basic humanitarian protections. 2017 was Mexico’s deadliest year, with a record 29,168 homicide victims—a 27 percent increase from 2016. Xenophobic targeting of refugees and migrants has been documented in Baja California, the Mexican state just south of California that includes Tijuana and other high-crime cities.

The administration also made recent changes to the U.S. asylum rules to narrow the circumstances under which people can be granted asylum. These new rules have had a particularly harmful impact on survivors of domestic violence, the LGBTQ community, and those fleeing severe gang violence.

How can I help asylum seekers?

In the U.S., the IRC helps meet asylum seekers’ basic needs, facilitates family reunifications, and connects people to critical health, mental health, and legal services. We also provide emergency assistance to help those in El Salvador who are most at risk to find shelter and safety, as well as cash assistance to help people rebuild their lives.

Here’s how you can join us:

Donate: The IRC helps families and children seeking refuge in the U.S. to find safety and stability as they await their asylum hearings. Donate now to support our efforts.