An IRC volunteer nurtures Syrian children alone and at risk

ZAATARI REFUGEE CAMP, Jordan - Osama, a graphic designer and former music teacher from the embattled southern Syrian city of Dera’a, recalls the stark options he faced one year ago. “To leave or to die,” says the 28-year-old father of a baby boy.

Osama paid smugglers to transport him across the border into northern Jordan, where he and his family live in the sprawling and dusty Zaatari refugee camp.

“Life in Zaatari is tough,” he says. “The only reason I stay is my three-year-old son. I want him to be safe.”

As a father, Osama sympathises with refugee children who don’t have family with them, an all-too-common occurrence at Zaatari. Children are often sent across the border alone, often equipped with a mobile phone so they can reach family or friends who have gone ahead.

Since early 2013, the IRC, in partnership with the United Nations Children's Fund (UNICEF), has helped more than 400 such children living in Jordan. Today, 13 Syrian volunteers contribute to the programme. They are provided a small stipend, but that's not why they volunteer. 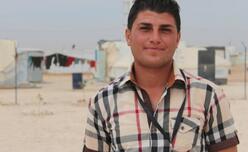 Osama, himself a refugee, volunteers with the IRC to support Syrian children who cross into Jordan without a parent or guardian.
Photo: IRC

“I want to make a difference in these children’s lives,” explains Osama, who says that his reward is seeing smiles on children’s faces. “And I want to make Zaatari a bit more bearable for them."

Osama helps at the IRC/UNICEF child reception centre, a fenced compound where unaccompanied children stay for up to two days before the IRC reunifies them with families or places them a foster family if the tracing process takes longer. The children are cared for in a safe environment while caseworkers search for their families.

He typically works a seven-hour shift, starting at breakfast. He and other volunteers make sure the children are involved in daily activities and are integrated within the wider camp community. He accompanies the children to school and brings them to play areas. Many are initially fearful of leaving the IRC reception area because they feel unsafe after their experiences in Syria.

Osama also arranges for children to receive services provided by humanitarian organisations and works alongside IRC caseworkers to reunite them with their families. “Reunification with family members is the biggest gift you can give them,” he says.

Some children like 12-year-old Abdullah*, leave a deep impression on Osama. “Abdullah is one of kind,” he says. “He is so clever, but coming from a poor family he never had the chance to pursue education, despite having great potential.” The boy’s parents are still in Syria; currently Abdullah is living with a foster family at Zaatari while the IRC traces his relatives in Jordan. Now Abdullah is attending school for the first time.

It’s the kind of success that fulfills Osama. “A sense of sharing and humanity is all we have left in this horrible situation,” he says. “This programme gives me an opportunity to make a difference and I am very thankful for that,” he says.

On the ground in some of the world’s most troubled places, the IRC helps people at their moment of greatest need — providing shelter, medical care, and safety. And we stay for as long as we are able to help in the rebuilding of lives and livelihoods.