The Mae Tao Clinic sits amid an open expanse of green fields surrounded by the jungled mountains of western Thailand. For decades, the Karen, an ethnic Burmese people, have waded across the nearby Moei River to escape the world’s longest-running civil war in Myanmar (also known as Burma) or to work as migrant labourers. Lately, some are travelling in the opposite direction, hoping the country they left decades ago is ready for their return.

Inside the clinic, located a mere three miles from the Burmese border, families cluster around patients resting in 140 hospital beds. Expectant mothers lie on their sides, rubbing their bellies, caressed by their loved ones, some of whom apply thanaka, a natural sunscreen made from tree bark. Mothers swaddle their newborns in colorful sheets, the babies’ cries piercing the dull hum of the occasional whirring fan that coaxes humid air through the open windows.

Tin Moe Zhine is a migrant worker and mother of eight who came to the Mae Tao clinic when her 9-month-old son, Win, grew ill.
Photo: Chiara Trincia/IRC

Established 25 years ago, the Mae Tao clinic is a veritable lifeline. Located near the refugee camps housing more than 100,000 people on the border, the clinic is the only source of adequate medical care for thousands.

Under military rule for nearly six decades, Myanmar began a historic democratisation process and political transition five years ago. Despite a momentous nationwide ceasefire in 2015, several ethnic armed groups, predominantly in the Kachin, Shan and Rakhine states, remain in direct conflict with the government. The country continues to be afflicted by the dual burden of violence and natural disasters, with over a million people in need of humanitarian assistance.

A safe haven in a vulnerable region

With only 6 physicians per 10,000 persons and one of the worst maternal mortality rates in the region, adequate healthcare is out of reach for thousands in Myanmar. As peace and reconciliation efforts continue in-country, access to quality healthcare remains a challenge, impacted by conflict and decades of divestment in social services. This means a long road to recovery – especially as humanitarian funding dries up on the border.

Under the USAID-funded Project for Local Empowerment, the International Rescue Committee supports Mae Tao in its efforts to provide assistance to this vulnerable population, to train community health workers, and to strengthen local health systems.

Dr. Cynthia Maung, the clinic’s founder, oversees a staff that provides 150,000 consultations a year, all performed free of charge. Herself a refugee, Dr. Cynthia fled from Myanmar in 1988 after a student-led pro-democracy movement grew into a nationwide uprising. She recalls the bedlam and despair that led her to open Mae Tao.

“I will never forget the first delivery I saw, in the jungle,” she says, looking into the lush foliage surrounding the clinic as if the scene were reliving the scene.

“Fighting was fierce between the Karen and the military, people were running away all around us.… It was late at night, and someone came to fetch me, telling me a woman was giving birth among the trees. She was a young woman, leaning against a huge trunk, screaming in the dark. An older lady was helping her with her bare hands and no instruments, a shaking beam of a flashlight shining over her shoulder. By the time we arrived, the baby was born, and I was shocked. That’s when I realised how much we needed to do for women’s health here, in this war zone.”

And so, in a dilapidated building in Mae Sot, Dr. Cynthia embarked on her life’s work.

“It was all improvisation back then,” she recalls. “We only had five beds—and the floor, of course—and we cleaned our tools with a rice cooker. Today, 3,000 babies a year are born at the clinic to refugees and migrants who travel great distances to receive treatment here. It is a safe space for them.”

She was a young woman, leaning against a huge trunk, screaming in the dark. An older lady was helping her with her bare hands and no instruments, a shaking beam of a flashlight shining over her shoulder. By the time we arrived, the baby was born, and I was shocked. That’s when I realized how much we needed to do for women’s health here, in this war zone.

Dr. Cynthia’s co-founder, Naw Htoo, also remembers the daunting challenge of providing quality health care in such a remote place with few resources, while stressing the urgent needs of the present.

“It’s got better now,” she admits, “but there is still unrest and fighting in many places. There is a long road ahead for stability, for social integration. We must continue to serve this population along the border, until people’s rights are secured and fully-established. The IRC’s support in this hasn’t waned.” 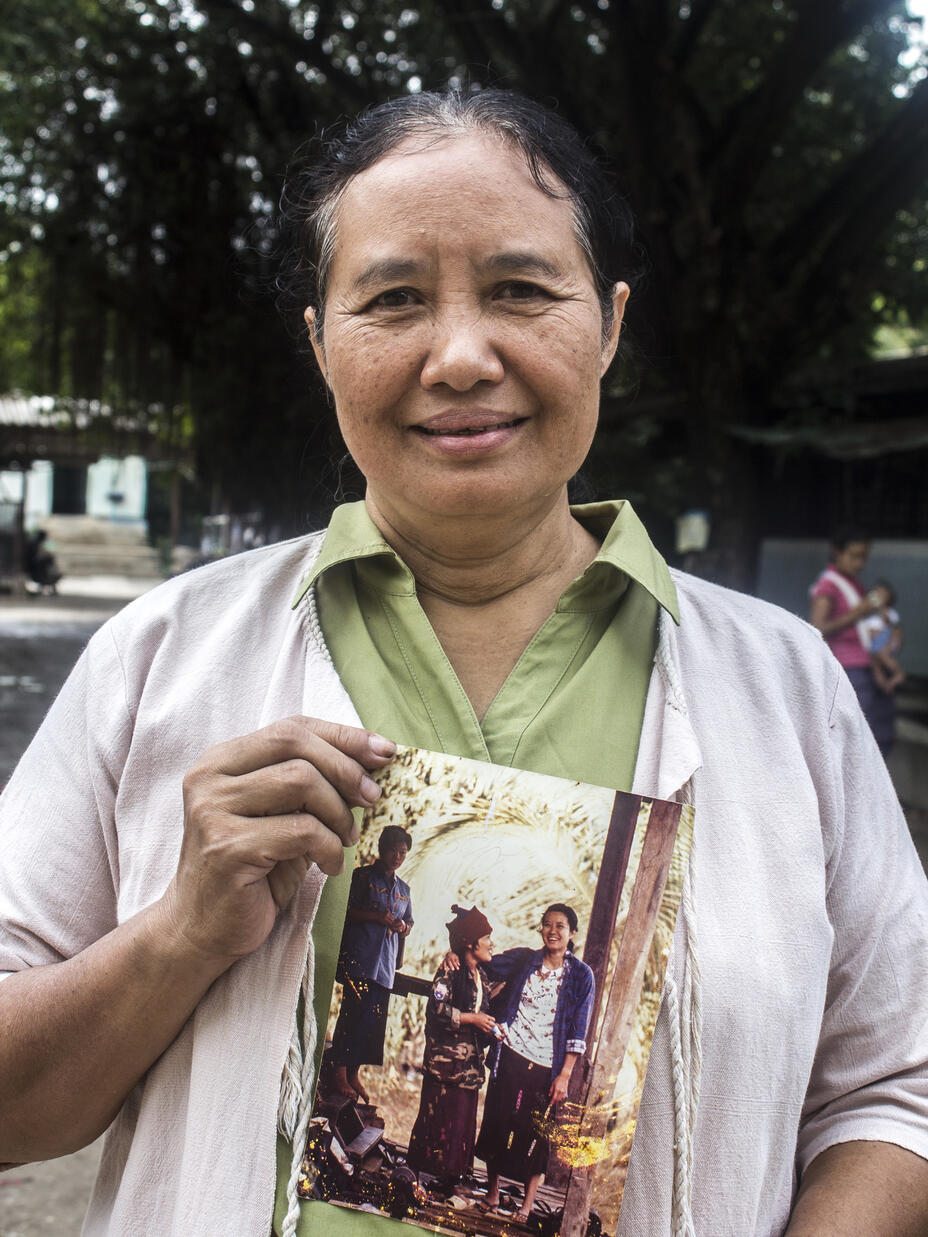 Dr. Cynthia Maung, a Burmese refugee who founded the Mae Tao Clinic on the Thailand-Myanmar border holds a photo of her younger self when the clinic was opened 30 years ago.
Photo: Chiara Trincia/IRC

Dr. Cynthia concurs. “Rebuilding a community means people need to be safe, to be treated with dignity. We have a long road ahead on that front.”

Uncertainty, but hope for the future

The search for safety is a common thread among patients at Mae Tao. A new mother, Paw Paw, explains why she came to the clinic from her home in Karen state.

“I crossed the Moei River many times when I was pregnant with Paw Hi Se,” looking over her infant son, only three pounds at birth. “I had heard about the Mae Tao Clinic from other migrants. They told me there was good care here. I hadn’t been before, but I had to take my chances.”

“They take care of us here,” agrees Tin Moe Zhine, migrant worker and mother of eight, who came to the clinic when her 9-month-old son, Win, grew ill. “Everything is broken [in Myanmar]. They say it is getting better, but I am not sure of that yet.” She holds Win in her arms, reassuring him. “I want to make sure my children have the best chance at a bright future.”

Nyo Thein, who works in the fields in the borderland, expects her second child in several days. She speaks softly, as if her baby were already sleeping peacefully by her side.

“I came to Thailand to work so I could have a better income, a better livelihood,” she says. “I want to return [to Myanmar]. But I have no land. I have no job. I miss my family. Here at the clinic, they understand my language. It reminds me of home, at least.” 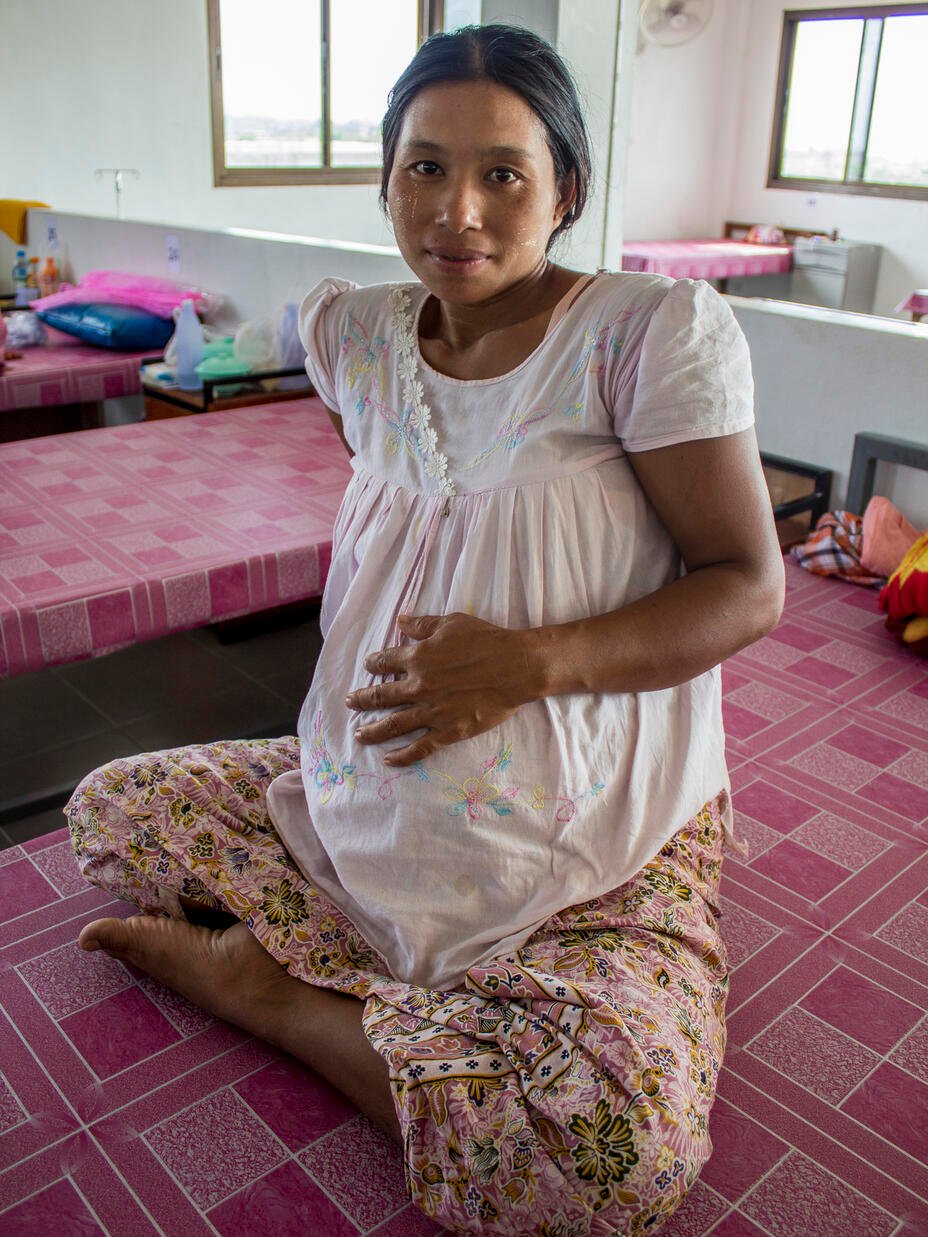 Dr. Cynthia ponders whether someday she will return to her country.

“I haven’t been back to Myanmar for 20 years,” she says. “The forests, the fields I remember, are gone.”

She pauses, then adds, “At the clinic, sometimes the children draw green fields, streams. This is what people dream of rebuilding. People need to be able to return not as [displaced persons] but as citizens, as fully-fledged participants in society. We need to work with the government and the local communities to move forward.”

The IRC works in both Thailand and Myanmar to support people affected by conflict and poverty through health, education, livelihoods, and legal and protection services.