"Now he is completely cured": One mother’s fight for her son’s survival

Lahpai Kah Ra was full of dread when she noticed the large lumps that had appeared on her six-year-old son’s neck.

Jat Seng Aung was suffering with lymphadentitis, a condition where the lymph nodes become infected and swell. He needed urgent medical attention. 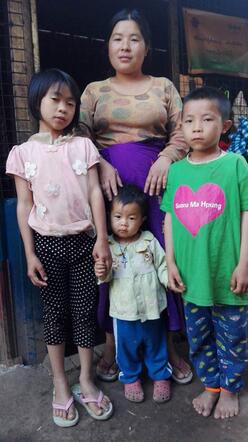 But Lahpai Kah Ra had no way to pay for it. Seven years ago, she was forced to flee her village when armed fighting broke out. She fled with her family on foot, they stayed in a forest for three months before eventually making it to Man Wein Gyi camp, where she currently lives alongside thousands of other people who have been displaced by the conflict.

Lahpai Kah Ra has been able to pick up a bit of work in a sugar cane field – but it is irregular and she struggles to earn enough to support her family.

“I was desperate for my son and I didn’t have enough money to take him to hospital,” Lahpai Kah Ra says.

There are thousands of mothers just like Lahpai Kah Ra living in Myanmar. Conflict and natural disasters have caused immense upheaval across the country and forced many to flee their homes and livelihoods. With limited opportunities to earn money, their families are put at risk. When children get sick, parents often have no way to pay for their treatment or the cost of getting to the hospital.

The International Rescue Committee provides free healthcare through our mobile health clinics to people living in Man Wein Gyi camp and other remote areas in the region. If somebody needs hospital treatment, the IRC will organise the referral and cover any costs.

Lahpai Kah Ra took Jat Seng Aung to see one of the doctors working at an IRC mobile health clinic. “To my relief, they took full responsibility for him – he was referred to the hospital and the IRC covered all the expenses. He’s now completely cured.”

Two years later, Lahpai Kah Ra’s still living in Man Wein Gyi camp and struggling to earn enough money, she spends her days caring for her children, doing housework and working when she can. “Sometimes, I feel like a servant living in this camp – the conditions are very stressful for me and my children,” she says.

24-year-old Dr Wilbert, one of the doctors working at the IRC’s mobile clinic, describes why communities in Myanmar rely on these services: “There is no alternative for people to get the care they need – if the clinic was to close down our patients would be put at risk. People in remote areas cannot access health services.” 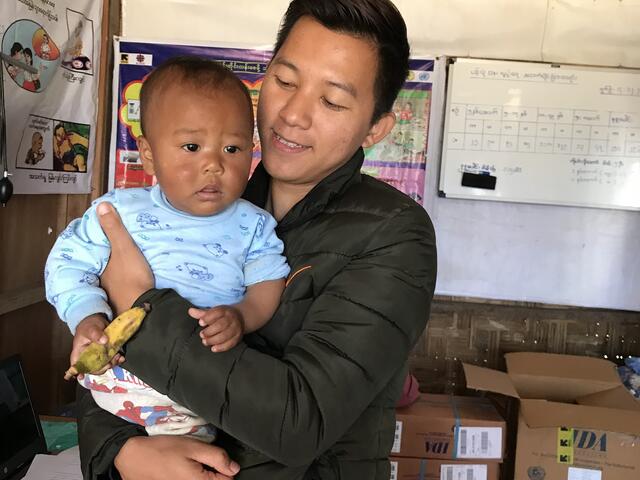 Dr Wilbert, who works for our mobile health teams as a doctor, says work "feels like a hobby" to him as he enjoys it so much.
Photo: IRC

There are times when it is literally life and death. Last year, a baby was brought into the clinic coughing, wheezing and with a high fever. Dr Wilbert quickly made a diagnosis of pneumonia and referred the baby to hospital to receive treatment. The baby is now happily fully recovered.

“My sympathy and empathy for my patients drives me to deliver good care,” Dr Wilbert explains. “Being a doctor has always been my dream – it feels like a hobby, because I enjoy it so much.”

As the conflict in Myanmar wages on, parents like Lahpai Kah Ra are being left with no choice but to stay in camps and rely on services like the IRC’s. Lahpai Kah Ra just hopes that one day she’ll be able to return home: “I want my children to become educated and to return to my village so we can live as a happy family like we were before.”

The IRC’s mobile health clinics in Myanmar are made possible through funding from the European Commission's Humanitarian aid and Civil Protection department (ECHO).

Read more about the crisis in Myanmar and how the IRC is helping to transform communities and save lives.