Mothers and their babies look to the future in northeast Nigeria

In the suburbs of Maiduguri, northeast Nigeria, behind the unassuming walls of a hospital compound, a quiet revolution in treatment of child malnutrition is taking place.

Every year, 50 million children across the world suffer from acute malnutrition, and 80% of them are unable to access care. After four years of research, the International Rescue Committee has developed a groundbreaking new way of treating acute malnutrition.

Parents are now armed with the knowledge and care to keep their babies safe and healthy. These portraits celebrate their recovery. 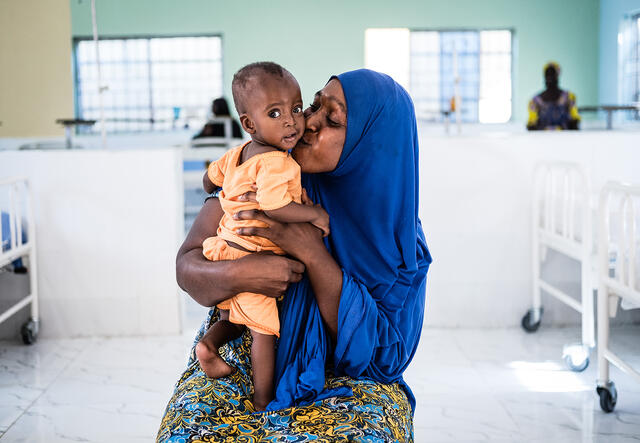 Binta has high hopes for her son Ali, who has recovered from malnutrition. "One day, he'll be president for the nation!"
Photo: Tom Saater/IRC

“When Ali was sick, I thought I would go mad,” Binta Hassan recalls. Her 10-month-old son  was vomiting and had a fever. She and her husband watched in horror as their normally spirited child grew listless and stopped eating or sleeping.

Binta wished she could afford to take Ali to the doctor, or even just to the local pharmacy, but the family had no money. They were being hosted by another family in Maiduguri, having been forced to flee their home when an armed group came to their village. Like so many displaced families in northeast Nigeria, their livelihoods disappeared overnight.

“I heard about the community outreach post,” Binta explains, reliving the day she brought Ali to be seen by IRC staff in her neighbourhood. They rushed him to the stabilisation centre. Six days later, Ali was back to his cheerful self. “I’m so relieved. Because of the IRC he’s back to normal.

“The most important thing is for all my children to receive an education. And one day,” Binta winks, “Ali will be President of the Nation!” 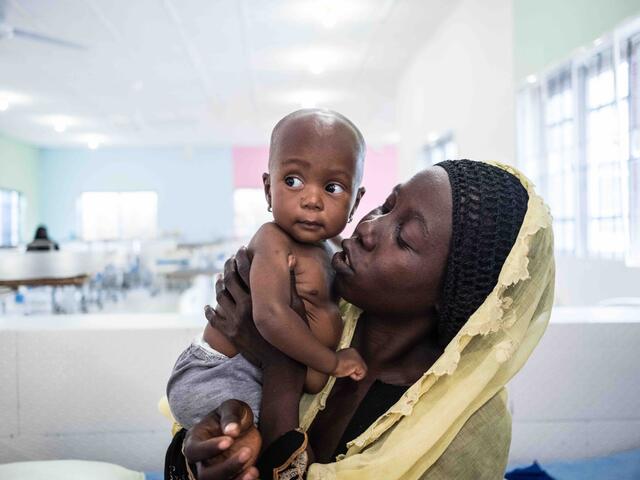 Amma's learnt how important breastfeeding is to keep her daughter Kaka healthy at the IRC's clinic in northeast Nigeria.
Photo: Tom Saater/IRC

Amma and Kaka were  seen by an IRC doctor who prescribed a course of treatment for the baby. Amma also received all the essentials needed for a hospital stay—nappies, soap, detergent, as well as nutritious meals for herself. Breastfeeding is key to fighting malnutrition in young children, so it’s essential that mothers can stay comfortably with their babies.

“We came here five days ago, and now she’s back to her normal self,” Amma explains. “She was like a different child—now she’s healthy, happy and beautiful. I have high hopes for her.” 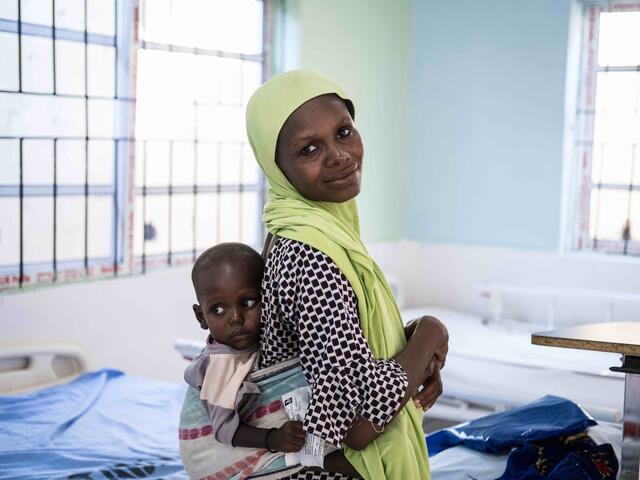 Falmata was devastated when her son started to show severe signs of malnutrition, thankfully he's made a recovery at the IRC's clinic.
Photo: Tom Saater/IRC

Falmata Goni’s village was attacked by armed men five years ago. “They burnt the houses, set the places of worship ablaze and were killing,” she remembers. Her family managed to escape and built their own shelters.

But their struggles weren’t over as they left their livelihoods behind and could no longer earn enough money for food. Falmata noticed a serious sign of malnutrition in her young son, Tujja—he had developed swelling all over his body, known as oedema. The pair were referred to the IRC stabilisation centre where Tujja was admitted. “I didn’t sleep for the first 48 hours,” Falmata remembers, “I was so worried. It wasn’t until the swelling started to subside that I began to feel hope. One day, I hope he will grow to become an imam who preaches peace.” 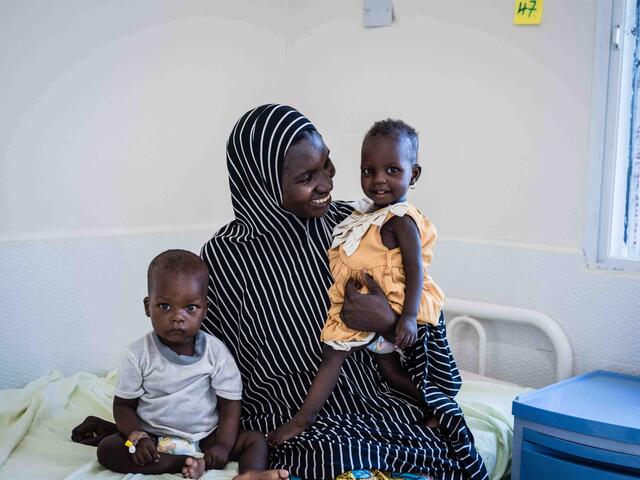 Hauwa says she is pleased to see her twins Adamu and Hauwa are back to their playful selves after recovering from malnutrition.
Photo: Tom Saater/IRC

Hauwa Umar’s one-year-old twins Adamu and Hauwa developed a cough one day, and quickly took a turn for the worse as they struggled to breathe. She rushed them both to the IRC stabilisation centre.

“I felt so bad when they were sick; they are normally very playful, they have the same personality.  They are now better. I hope that things will continue to improve and they will both receive an education.” 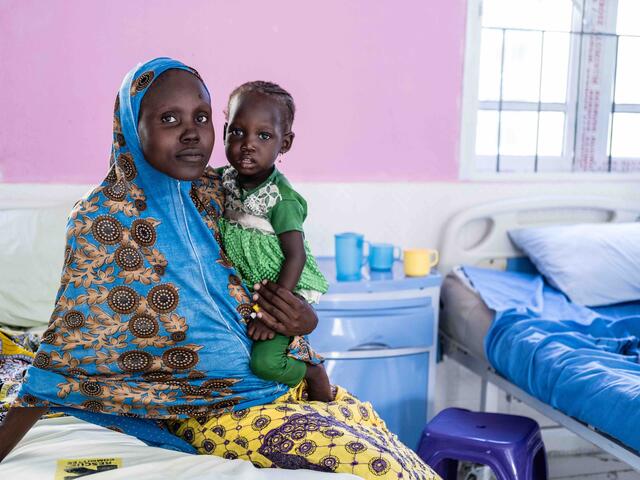 Aisha has been forced to flee her home twice due to conflict, she's now rebuilding her life with her daughter also called Aisha.
Photo: Tom Saater/IRC

Aisha Muhammed has fled her village twice in recent years. Her husband had been a successful fisherman and the family lived comfortably before being forcibly displaced by fighting. They had returned to their village, only to be attacked again by armed men. Aisha, her husband and three children now live in a vast, government-run IDP camp.

When her youngest daughter, also named Aisha, started vomiting and running a fever, Aisha brought her to the IRC clinic in their camp who rushed her to the stabilisation centre. “We were welcomed, and within two days Aisha’s symptoms were gone,” she recalls. “She’s well again. I hope one day she’ll become a nurse or midwife to assist her fellow citizens.”

Treating malnutrition is one of the most effective ways to improve children's growth and development. But for millions of families in crisis-affected areas, critical health services and resources remain out of reach. Experts anticipate a rise in the number of malnourished children in 2020 as a result of COVID-19. Read how we’re taking on the crisis.

These photographs were taken before the outbreak of the COVID-19 pandemic. The IRC’s stabilisation centre response in Maiduguri is supported by OFDA.