Melissa's story: "My dream is that the fighting will stop"

"I had to leave my house because of the fighting. Life here is not good; it's really hard to find something to eat and there's nothing to do.

Sometimes I meet other girls who live here and we play together or go to church. I don't feel safe here and I'm afraid a lot, especially at night.

My dream is that the fighting will stop so that I can go home again." 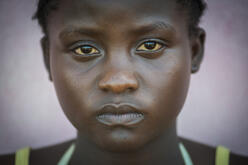 15-year-old Melissa, displaced by sectarian violence in Central African Republic (CAR). She was interviewed by the International Rescue Committee's Peter Biro at one of the camps in the capital city, Bangui, where uprooted families have sought shelter.

The ongoing conflict has devastated CAR — already one of the world's poorest countries — and over half of the population is now in need. About 10 percent of the population, most of them Muslim, have fled the country to escape persecution.

The situation of the 560,000 people displaced inside the country is desperate: camps are makeshift, overcrowded and dangerous.