Muyambo Marcel Chishimba is a Congolese refugee resettled by the International Rescue Committee (IRC) in New Jersey, The United States. As a young boy, he was taught to paint by his uncle, acclaimed Congolese artist Kabemba Albert Stounas. For three decades, Chishimba worked at his art before he was forced to flee his war-torn country in 1991, first to Zambia, then to the US. Staff members at the NJ resettlement office instantly fell in love with his “phenomenal” work and, with the help of staff, supporters and the Refugee Assistance Partners of New Jersey, helped Chishimba make his artistic debut in his new home with an exhibition at the Maplewood Memorial Library. Ahead of World Refugee Day 2021, We talked with Chishimba, who is learning English, through a translator.

You lived and worked in Congo for many years before fleeing to Zambia. 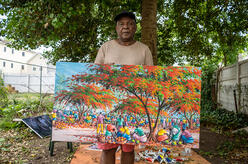 I was born in Lubumbashi, Congo, in 1950. We all lived a good life … until war broke out and we became refugees. When we were fleeing, I was afraid we were going to die. You would see a person being killed by machete, another being hit by a bullet. We got used to death. There was nothing to laugh about. They first killed my wife.

With my three children, I reached the border. We entered the forest. It is in the forest where I eventually met my current wife. She had also fled the war. She helped me with the kids, then later we got married.

We arrived in Zambia, a new country with no war. But we were in the camp, we were suffering a lot. Finding food was hard. I used to draw, and it sustained my life. 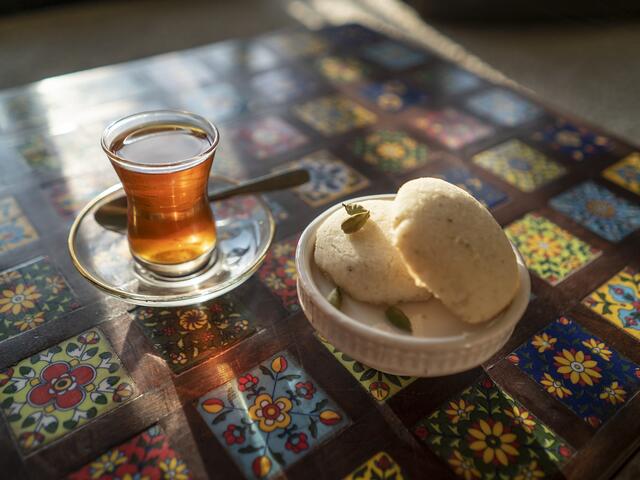 "My favorite cookie to make is shakar lama," said Yousif. "It’s my grandma's recipe and I haven't seen my grandma in a very long time. I love cardamom a lot—it makes me feel like I'm home..."
Photo: Andrew Oberstadt/IRC

You had been drawing, painting, since you were a child.

I had an uncle who was an artist. So many times, I used to watch him draw. He gave me art pieces to sell. I was so interested in knowing this work. My uncle saw that I was interested, and he took me to a visual arts academy.

In my whole life, I have never done any other job but to draw. What I love about art is I taught all my 8 children and wife how to paint. And when I die, they will keep our tradition alive.

And your art, as you noted, sustained you during those hard years in the camp.

When we were in Zambia, I made a painting of refugees. I was thinking of how I fled my country. I wanted to showcase the suffering we faced. The piece impressed people. 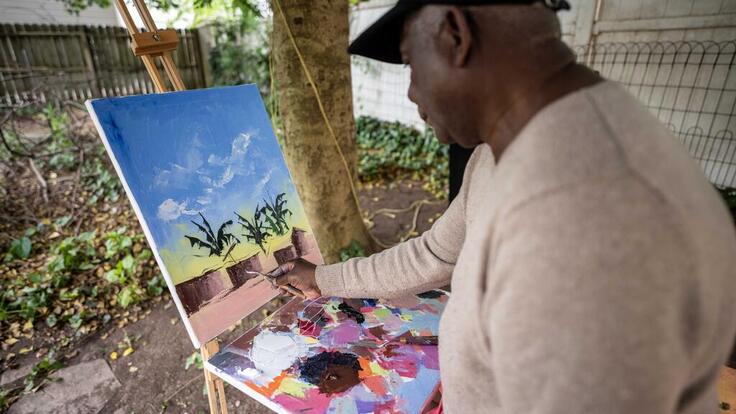 Chishimba's paintings often draw from his memories of his home country, the Democratic Republic of Congo, which he had to flee when war broke out in 1991.

You began to sell your work.

Right. You may get an order to do landscape art, so you do a landscape. Another time you get an order for animals, then you will do animals. People would come to have their portraits done. I would draw portraits so that I could earn an income. My life depended on painting.

In 1985, if I remember well, I made a painting of a certain businessman. I took it to him, and he said it was not him. I insisted it was him, and he maintained it was not. He brought the picture, and then, when I took a last look, it was really not him. I had missed it.

If someone says my work is bad, I am happy. You know why? Because I push myself to do better". - Chishimba

You know, drawing is like that: If you draw, some people will criticise you. But if they all say it is good, you will not make progress. If someone says my work is bad, I am happy. You know why? Because I push myself to do better, you see! Even my children, when teaching them how to paint, I would say, “That is not good.”

Art is about learning, about overcoming challenges, having the courage to fail?

If there are children here interested in African art, I will be interested in helping them. I will teach them painting. If they are seeing me as a refugee, I can say, to encourage them, please look at my work, look how I do my art, and that will help me develop more, too. In Zambia I used to teach children in private schools, but many were better than me! 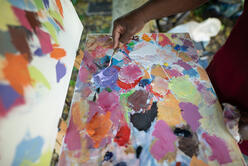 In 2014, I painted a portrait of the president of Zambia to show my appreciation for taking us in as refugees. It took courage to give it to him as a gift, and he loved it so much that he still has it today.

Painting helps us to get to know each other. Like Picasso—the whole world knows him because of his paintings. And you and I, we are meeting now because of painting.

All the time, I’ll see an image and want to start drawing. In Zambia, I would watch women fetching water.and start drawing. With my pencil, I would make a draft, and that would give me the idea for an art piece.

And the future … what do you see for yourself and your family?

I know how to say it in Kiswahili, but in English it is difficult. In Kiswahili, we say, “Kutangulia siyo kufika,” meaning, “To precede is not to reach.” I am trying to explain this, you might not understand. If you start drawing a portrait, you will not finish it in one day. It will take a lot of time, even months, or a year. Draw. Sketch, sketch. Follow up on sketch. Paint. Leave it. Work on a different one. After three months, return to the first, retouch. Leave it to dry. Refinish.

“To precede is not to reach.” I never thought I could come to America. Many refugees have come here over the years. So, they preceded … and I have followed.

Get involved this World Refugee Day 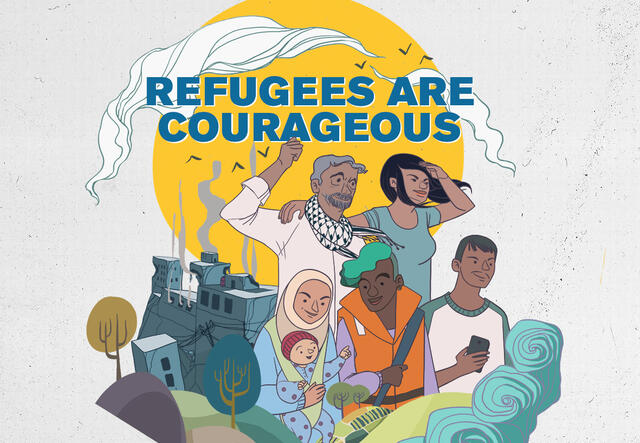 It takes great courage to start over, uncertain what the future might hold. Through their painting, their dance, or their song, refugee artists like Chishimba use their creativity to connect, heal and bring us together during the pandemic and beyond. They inspire us and shape their new communities for the better. World Refugee Day is June 20. Learn more and take action at Rescue-UK.org/Courage.