One month after the Moria fire, the mental health of refugees continues to suffer

I couldn’t believe it when I read the message from my friend; I called him right away to confirm it was true. A fire had destroyed Moria, the refugee reception centre on Lesvos that was home to twelve thousand people. I felt numb.

I thought about all the people who had once again been forced from their homes, including my own clients, who were already processing so much. I could only imagine the fresh trauma they would be experiencing.

This World Mental Health Day marks one month since the fire, and I am reminded of the extreme tragedies many of my clients have already faced: explosions in their hometowns, families or friends killed in front of them, terrifying journeys across the Mediterranean. The camps in Greece are a tough place to come to terms with these memories: dirty and dangerous with the interminable waiting time to have their asylum cases heard looming over them. 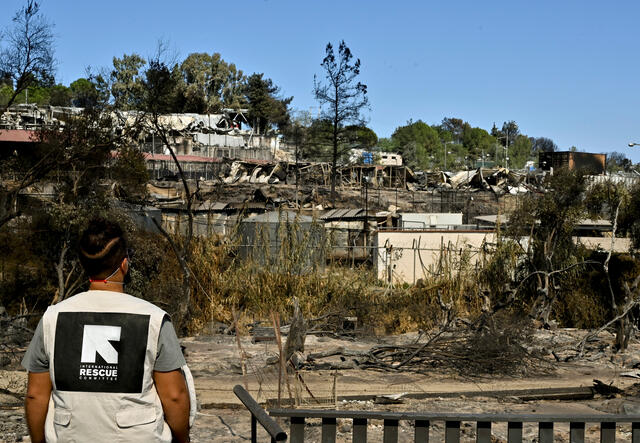 Like many people across the world, my team of psychologists have been working in difficult conditions over the last few months. The pandemic has meant that we are unable to meet our clients in person, carrying out therapy sessions over the phone instead. Refugees inside Moria were subject to strict lockdown measures, unable to leave the camp without permission. This has been detrimental to their mental health, and our work has become more vital. But it became nearly impossible to bridge the physical distance -  and the emotional distance -  between our clients and us. We had to run sessions on the phone, while our clients spoke to us from the camp. Sometimes the connection fails, or we can’t use video, and it has been incredibly hard to provide people with the same level of support as we did before.

I am reminded each day of the sheer resilience of the people I work with. I supported one man who was so traumatised by the explosions in Syria that he couldn’t bring himself to get on the boat from Turkey to Lesvos. He couldn’t bear the thought of witnessing a shipwreck and seeing more people killed in front of him, so he chose to cross the Aegean Sea by swimming from the coast. He swam for twelve hours before he was picked up by the Greek coastguard and brought to the shores of Lesvos. He embodied the qualities I often see in the refugees I meet: a will to survive and a determination to rebuild their lives. Yet, he was also someone who came to our clinic with severe Post-Traumatic Stress Disorder, someone who suffered violent flashbacks and could not sleep. 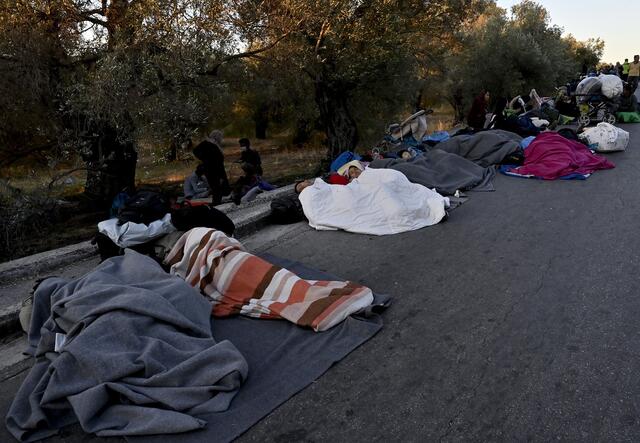 As a result of the fire 12,000 of Moria's residents lost their home, forcing thousands to sleep on the side of the road.
Photo: Milos Bicanski/IRC

There are thousands of people who experience similar symptoms as him, such as severe headaches, psychosomatic pain, or memory loss. It’s wrapped up in an intense feeling of fear and insecurity. Many of my clients describe the sense of helplessness that comes from being completely destabilised.

In the weeks after the fire, people were sleeping in the streets or in fields before being taken to a new camp. It is basic, with no running water or proper shelter. I am worried about how they are going to survive the approaching winter.

I sense a greater depression among my clients now, like they have lost meaning and purpose in their lives. The Greek government and European Union have the power to restore hope. People must be urgently evacuated from these desperate conditions to safety on the Greek mainland or other European countries.

Thinking back to the night of the fire is difficult. It can be hard not to metabolise the painful experiences of my clients. Yet I continue to be inspired by their strength, this is another hurdle I know they’ll overcome. I will never forget the power in the soul of that man, and his determination to save himself and swim across the sea.

Our support on the island is vital, it is lifesaving. But it is not enough. This World Mental Day, we must remember that people need support, but above all, they need humanity.

Dukas Protogiros is a psychologist for the International Rescue Committee, and has been supporting asylum seekers living in Lesvos for the last year and a half. He provides mental health support to those living in Moria camp, treating people for conditions such as Post-Traumatic Stress Disorder and depression.​