The International Rescue Committee is deeply saddened by the loss of longtime IRC Overseer Elie Wiesel, who died Saturday at his home in New York. He was 87. 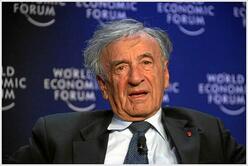 Wiesel survived the Nazi concentration camps of Auschwitz and Buchenwald to write books that bore searing testament to the slaughter of more than 6 million Jews in World War II. He received the Nobel Peace Prize in 1986 and in 1987 was honored with the IRC's Freedom Award for his "extraordinary service to humanity, freedom and the cause of refugees."