What the cost of living crisis looks like around the world

In many countries around the world, the costs of everyday goods and services are getting more expensive. Rising costs are making life more difficult for many, whether it be to afford groceries, gas and energy bills or rent.

“Cost-of-living” is a term coined by economists for the amount of money needed to maintain a certain quality of life while paying for housing, food, taxes and healthcare. In many parts of the world, the cost of living has spiked, leaving people unable to maintain their quality of life.

In the United Kingdom, many are feeling financial pressure. 93 percent of adults reported an increase in their living costs over the past year, with 73 percent stating that costs have risen in the last month alone. Food banks across Britain are warning that they may have to turn families away or limit the amount of food dispersed throughout the coming winter months.

The UK’s consumer price index, a tool used to measure living costs, is up nearly 9 percent from a year ago indicating that prices of goods and housing are rising. Credit card spending increased by £700 million over the month of August, a sign that British households are struggling to handle the rising costs of essential goods including energy and gas.

What has caused the cost of living crisis?

The crisis has been caused by a number of domestic and global factors, including the ongoing economic recovery from the COVID-19 pandemic and the war in Ukraine. The war has led to cuts in the availability of Russian oil and gas which left the global economy competing over a diminished energy supply. In just one year, domestic gas prices increased by 96 percent and electricity by 54 percent. While oil prices have recovered slightly since the outbreak of the war, many Britons are feeling the impact of rising costs and the looming cost of living crisis.

How is the cost-of-living crisis affecting people around the world?

In 2021, the Government cut UK Aid by $1 billion, as a result of the cost of living. It was announced as a “temporary measure” and the Chancellor at the time stated that the target will return to 0.7%, when the “fiscal situation allows.” However, already the impact of this cut has been devastating on vulnerable communities.

Rising costs of living are affecting several countries around the world, not only the UK. Here are four countries that are facing severe increases in the cost of living and in some cases, complete economic collapse.

Since the shift in power in Afghanistan in August 2021, the country has experienced near economic collapse. Policies meant to isolate the Taliban by cutting off Afghanistan from the international financial system have crippled the national economy.

Families are increasingly unable to buy food and basic necessities. Now 43 percent of the country lives on less than a meal a day while 97 percent of the population is estimated to be soon living below the poverty line. Access to healthcare is becoming more strained, leaving 12 million people unable to obtain critical health services.

Afghanistan also abruptly lost large portions of foreign aid from August last year, equivalent to about a 40 percent loss of the country’s GDP. The sharp fall in foreign aid dedicated to Afghanistan has made it more difficult to provide support to the people facing this humanitarian crisis.

The economic collapse has created a humanitarian crisis that could kill more than the last 20 years of war in Afghanistan. 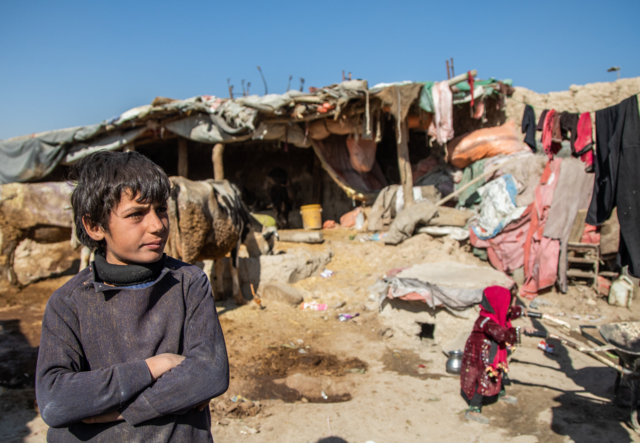 One of the most severe inflation crises recorded has led to economic collapse in Lebanon, with an increasing number of people being unable to afford their cost of living. The economic turmoil in Lebanon also impacts the 1.5 million Syrian refugees who have found safety in the country. Across the country, both Lebanese and refugees are now struggling to afford their basic costs, and in some cases, even to access their own money from the banking system.

Over the last few years, Lebanon’s GDP has shrunk from $55 billion in 2018 to just $20.5 billion in 2021 while the Lebanese pound has lost 95 percent of its value. Prices of goods have risen while the value of wages has fallen, forcing consumers to turn to importers who sell crucial goods, like fuel and medicine, on the black market.

With inflation at 161 percent in August, poverty rates have sky-rocketed. Today almost three quarters of the population are experiencing poverty with refugees particularly affected, 88 percent of whom are living under minimum survival conditions. 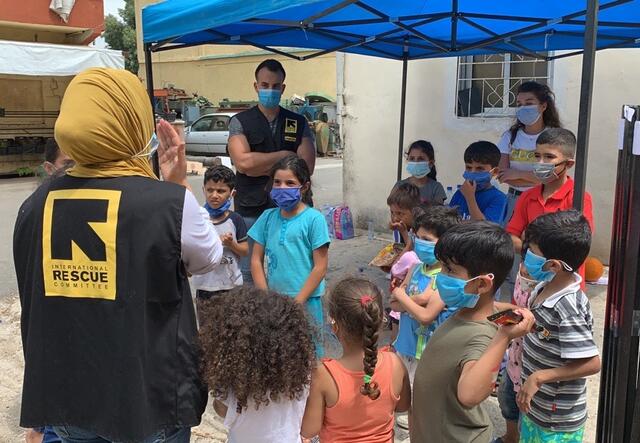 IRC staff members provide psychosocial support to a group of children in Beirut, Lebanon.
Photo: Rebecca Mouawad for the IRC

Pakistan is facing a decades-high inflation rate while the domestic currency continues to depreciate and foreign reserves run low. The recent flooding in Pakistan which submerged one-third of the country underwater has exacerbated the situation and is expected to cause well over $10 billion in damages.

The flooding is expected to increase imports and decrease exports. Pakistan will need to purchase more essential goods from other countries while having fewer of its own to sell, harming the country’s economy. Domestically, the floods have caused mass damage to infrastructure and destroyed a significant amount of the country’s crop yields.

Around 3.6 million acres of crops and over 1.1 million livestock were destroyed and killed in the flooding. The damages to Pakistan's agricultural industry will depress both earnings and availability of food, exacerbating a 2.6 billion ton deficit in wheat caused by the ongoing conflict in Ukraine.

Prior to the devastating floods, Pakistan was approaching a cost of living crisis. This climate-induced disaster pushed the country over the brink and will necessitate a long-term economic recovery. In the short term, the country needs help to rebuild and families need assistance to secure basic needs such as food and shelter. 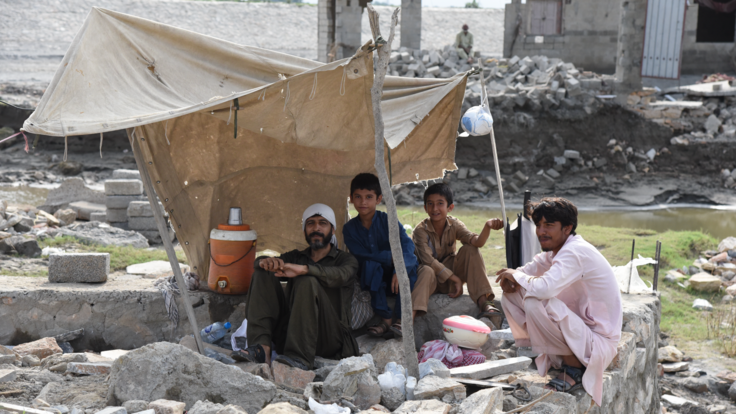 Shezad and some of his family members sit together in their temporary shelter after their home in Nowshera, Pakistan was destroyed by flooding.
Photo: Saima Javaid for the IRC

Somalia’s economic outlook has been hampered by a series of shocks that have left its people struggling to afford basic necessities. The economic fallout from the Ukraine war and a series of climate-induced disasters have left Somalis with an extreme cost of living crisis.

It has become more difficult for Somalis to find necessary goods which are in low supply across the country. Even when they are found, the depreciation of the Somali Shilling has also made these goods more difficult to afford. 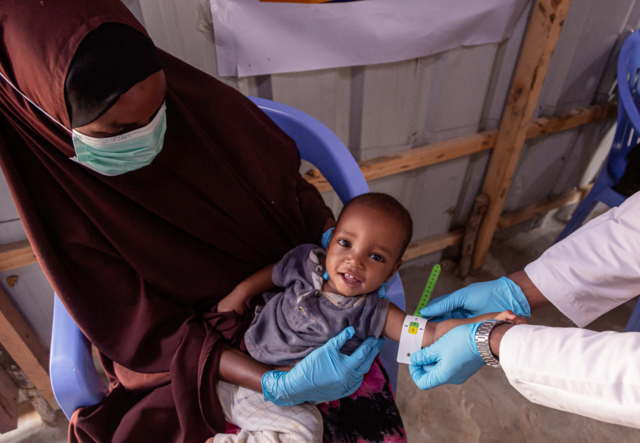 Amina and her children were forced to flee from their home in Burnhakaba, Somalia due to food insecurity. Now they live at a camp for internally displaced people in Mogadishu, Somalia where Amina takes one of her children to be screened for malnutrition at an IRC health clinic.
Photo: Harrison Thane for the IRC

For nearly six months, the war in Ukraine prevented Ukraine from shipping grain through their primary trade routes in the Black Sea. Without grain shipments, Somalia, which historically imports 92 percent of its grain from Ukraine, suffered the fallout effects of the war. Limited food supplies drove up demand in Somalia, leading to an inflation in food supplies reaching 17.5 percent in the summer of 2022.

Somalia is also highly vulnerable to climate shocks and is one of the countries most impacted by climate change despite contributing less than 0.1 percent of global CO2 emissions. Somalia has been experiencing extreme drought and is set to enter its fifth consecutive failed rain season. Consequently, crop yields are failing en masse while herders struggle to keep their animals alive through tough conditions.

The lack of food available for Somali consumers has created a humanitarian crisis and a large degree of food insecurity in the country. Since April, the number of people in Somalia facing famine conditions has increased by 160 percent while half of all children in the country below the age of five are malnourished. The limited availability of essential food supplies, in tandem with a depreciation of the national currency, has turned the cost of living crisis in Somalia into a severe humanitarian one.

The IRC is actively carrying out a variety of humanitarian responses across the world and provides direct assistance to better clients’ economic wellbeing. We provide assistance across several sectors including emergency relief, cash assistance and education and training.

Our cash relief programme helps clients purchase basic necessities and gain control of their lives. Cash assistance gives families the power to choose how to best meet their own needs and is one of the most efficient methods of assisting our clients. The IRC also supports programming aimed at promoting women’s economic empowerment, job knowledge acquisition and financial self-sufficiency.