What is happening in Afghanistan?

In the year since the shift in power in Afghanistan, humanitarian needs across the country have skyrocketed. With an unprecedented economic freefall driving hunger and poverty, the country is facing a humanitarian crisis that could kill more Afghans than 20 years of war.

In August 2021, the Islamic Emirate of Afghanistan (IEA), commonly known as the Taliban, took control of Afghanistan. This shift in power followed a major escalation in the conflict between the IEA and the government of Afghanistan over the course of 2021 and a U.S.-IEA deal that saw American forces depart the country rapidly.

Read our Crisis Briefing for more background on the situation in Afghanistan.

The number of displaced people inside Afghanistan reached 3.5 million at the start of this year and more than 800,000 were newly displaced last year. Now, 97 percent of the Afghan population could fall below the poverty line.

‘One year since the shift in power, Afghan civilians are bearing the brunt of a decimated economy and spiraling humanitarian crisis,’ says Vicki Aken, Afghanistan director for the International Rescue Committee (IRC). ‘Since 15th August of last year, the critical non-emergency donor funding that sustained basic services in Afghanistan has been largely suspended.

‘Twelve months of sweeping economic disaster has seen the number of people in need of humanitarian assistance jump by a third since the start of 2021. Today a staggering 55% of Afghanistan’s population relies on humanitarian aid.’ 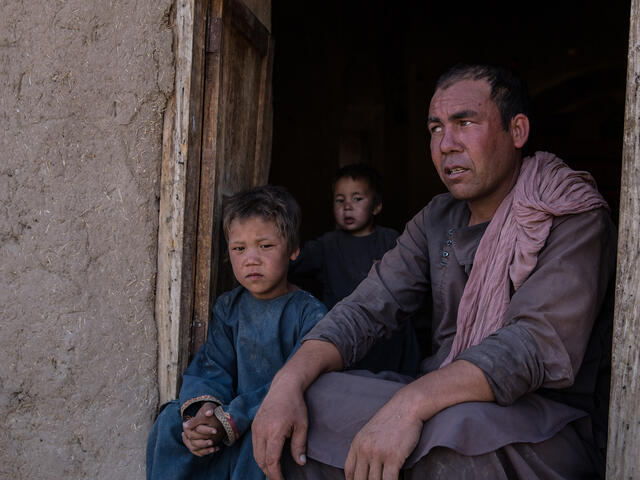 Hundreds of thousands of Afghans have been displaced inside their country due to conflict and drought.

24 million people in Afghanistan are in dire need of humanitarian assistance, which is only worsening as the conflict intensifies. The crisis ranked number one on the IRC’s 2022 Emergency Watchlist, a global list of humanitarian crises that are expected to deteriorate the most throughout the year. 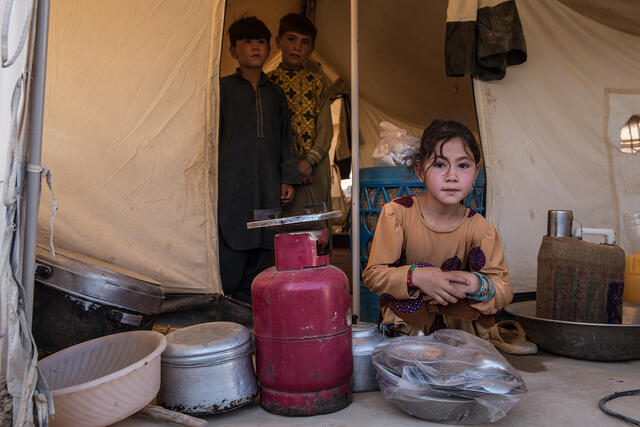 24 million people in Afghanistan need urgent humanitarian assistance—a situation that is only worsening as the conflict intensifies.

How the change in power has affected Afghanistan

Here’s how the current situation is affecting the economy, food security, women, and education.

Economic isolation has pushed the Afghan economy to the brink, driving poverty, hunger and need. Access to Afghanistan’s foreign reserves remains frozen, the banking system has been grounded, and development assistance, which financed most government services, is on pause.

The situation is evolving into a catastrophe of choice as the policies of international donors designed to economically isolate the Taliban are simultaneously collapsing the Afghan economy.

Afghans that could support themselves and their families before the change in power are now entirely dependent on aid. The country has experienced an unprecedented economic freefall with 43% of Afghanistan’s population living on less than one meal a day.

The economic crisis has caused a dramatic increase in food prices, which combined with the rise in unemployment has contributed to widespread hunger that is touching every part of Afghanistan.

According to a recent World Bank survey, up to 70% of Afghans are unable to afford food and other necessities. 23 million Afghans—over half of the country’s population—are experiencing acute hunger, and the World Food Programme has warned there are 8.7 million people at risk of famine.

The role of women in Afghan society is at risk of shrinking as the authorities continue to issue edicts impacting their access to work and education and their freedom of movement.

Women are vital to the delivery of humanitarian assistance, education and healthcare services. Without female staff, services cannot reach women and girls, who are often amongst the most in need. Reports from the Paktika earthquake response suggest women were unable to receive medical care due to an insufficient number of female physicians.

Meanwhile, restrictions that limit women’s access to work, including regulations on dress and constraints on movement, have led around 99% of women-headed households to lose their income, and, in turn, they and their families face rising hunger and malnutrition.

These restrictions are also contributing to Afghanistan’s failing economy, producing an economic loss of up to $1bn—about 5% of Afghanistan’s GDP.

The closure of schools for girls grade 6 (aged 11 and 12) and above marks the beginning of a catastrophic step backwards for Afghan children. Conflict and COVID-19 have already set back access to education for millions across the country—we must not risk another lost generation in Afghanistan.

This move would be the latest in a line of edicts designed to push women further into the margins of Afghan society and will serve to further restrict their access to the public sphere and jobs, and will impinge their freedom of movement.

How the IRC is helping

Prior to the change in government, the IRC delivered services in nine provinces. Now, its 6,000 staff—99 percent of them Afghans themselves—work across 12 provinces to deliver programmes in education, health and nutrition, women’s protection and empowerment, and more.

Here's how the IRC has expanded its services to reach even more people in need.

Cash programming is critical, as people in crisis are best positioned to know what their families need to survive. The IRC has provided Afghan families with general cash assistance for decades. Since last year, it has expanded to provide cash to address specific needs, such as health, nutrition, and work.

Cash for health, for example, can help families travel to regional hospitals for treatment. 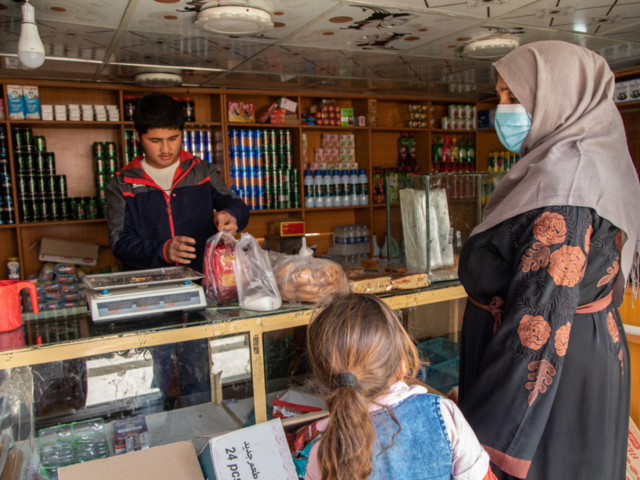 Noor* takes her daughter to the local market to purchase food for her family using the emergency cash assistance provided by the IRC.
Photo: Kellie Ryan for the IRC

Noor* fled Kunduz Province with her three children when the Taliban came and conflict was raging. She had no time to bring any belongings except some clothes for her kids.

‘I thank [the IRC] for what they have done for us so far,’ she said after she received cash assistance in late 2021. ‘Today, I want to buy tea and sugar, onions, and things like that we need. It means that my kids will not starve to death. Now, they are hopeful.’

The IRC is also delivering an Economic Recovery & Development programme, including Cash for Work in provinces such as Nangarhar, where the local community is given a cash stipend to clean and irrigate the canals on their farmland. This approach has delivered short-term cash support, while allowing crops to flourish and yields to increase.

Over the last year, the IRC has scaled up its health response, supporting 62 health clinics in 11 provinces. Our teams work around the clock to diagnose and treat malnutrition in children and pregnant and lactating mothers, respond to deadly cholera outbreaks, and support maternal and reproductive health.

We also have a network of 31 mobile health teams, who can travel to remote communities to deliver lifesaving medical assistance. After a June earthquake hit a remote area in the southeast, IRC staff formed an all-female mobile health team that was able to quickly deploy to people who had been injured and provide first aid support.

‘The proudest point in my job is serving my people—the people of Afghanistan,’ said Amna Gul, an IRC health manager who helped create the all-female team. ‘Especially the women who are not able to go to health care facilities because of transportation, financial conditions and Mahram [needing a male chaperone to receive care from a male health care worker].’ 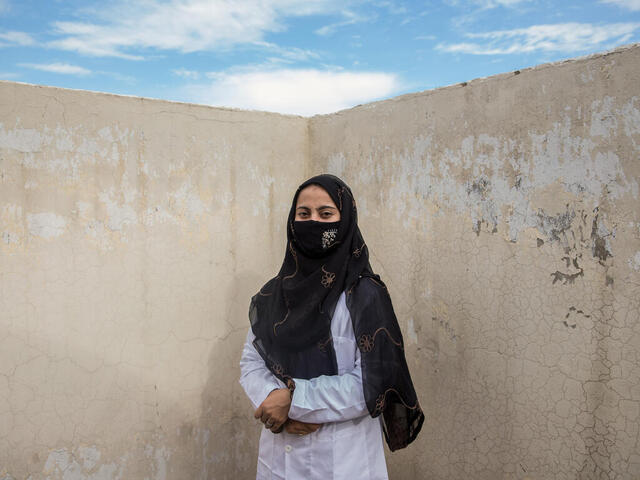 Amna Gul, age 25, helped to form an all-female mobile health team to reach remote areas after an earthquake in the summer of 2022.
Photo: Oriane Zerah for the IRC

A recent IRC report found that 77% of women-led civil society organisations (CSOs) have closed down in the last year, yet their presence is critical to delivering services to the most vulnerable communities, including women and children living in rural areas.

In response, the IRC expanded its partnerships in Afghanistan, particularly with women-led organisations. The IRC also fought to recruit and retain female staff members, and committed to ensuring at least a 40% representation of women in its workforce. The perspective of these staff members is critical as women and girls often bear the brunt of the suffering in any humanitarian crisis.

‘People rely on the IRC's services,’ said Setayesh**, a female staff member who worked at the IRC before and after the change in power. ‘And we were clear that in order to do our jobs, and to serve women clients, we needed our women staff to work.’ 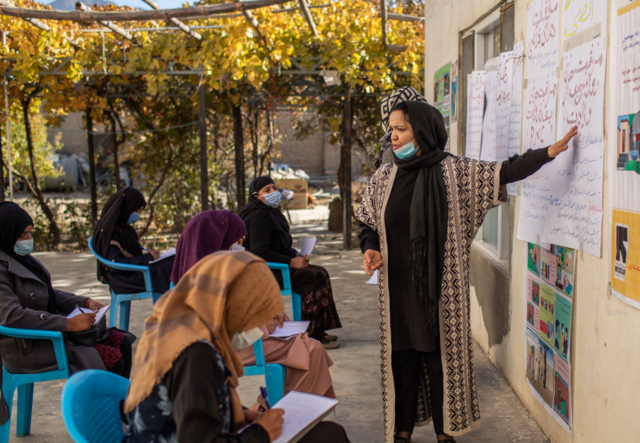 IRC health staff train volunteers on how to screen for malnutrition. Later these women go out into their communities to educate mothers and distribute information.
Photo: Kellie Ryan for the IRC

The breakdown of public sectors has extended to the education system and as teachers lose out of salaries, many schools have been forced to close. As a result, education across the country is largely possible because of the presence of NGOs like IRC, which can fund teachers’ salaries.

The IRC runs Community-Based Education programming across five provinces, which provides children up to grade 6 with informal learning as they are unable to access formal education. Many of the children travel to CBE classes up to six times per week, with dreams of becoming doctors, engineers or teachers themselves.

Read more about five girls who are determined to get an education. 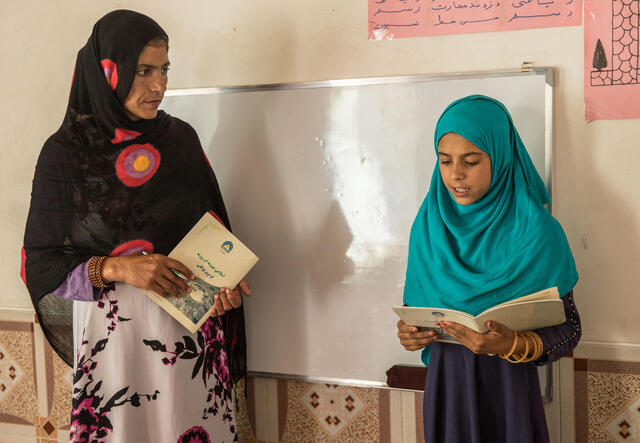 Bibi Asha's teacher looks on as she reads to the class.
Photo: Oriane Zerah for the IRC

More than half of Afghanistan's population face acute hunger this winter. The IRC are members of the Disasters Emergency Committee (DEC) which has launched an emergency appeal to combat widespread hunger in Afghanistan. When emergencies hit, the DEC brings together leading UK aid charities to raise funds quickly and efficiently.

Donate to the IRC to help it continue its critical work in Afghanistan and around the world.