What is happening in Afghanistan?

As violence intensifies across large areas of Afghanistan, civilians are at risk of being caught up in fighting between warring parties.

Civilian casualties reached record levels in the first half of 2021. Unless steps are taken to de-escalate the violence, Afghanistan will see its highest ever number of such casualties in a single year.

Some 360,000 people in Afghanistan have been uprooted from their homes by conflict since January, and an additional 30,000 are reportedly fleeing the country each day. (Accurate and up-to-date figures are unavailable as many aid workers in the most intense areas of fighting have also been displaced.) Afghanistan has already produced the second-largest displaced population in the world, after Syria, and this number is expected to rise exponentially.

“The latest violence should be cause for great alarm,” says Vicki Aken, Afghanistan director for the International Rescue Committee (IRC). "Hundreds of thousands of people have already been internally displaced due to conflict as well as drought.”

“We are on pace for record civilian deaths and injuries, with the majority being women and children. Schools are closed, food shortages abound, and people are turning to desperate measures such as child labor and early marriage for girls.”

Hundreds of thousands of Afghans have been displaced inside their country due to conflict and drought.
Photo: IRC

Eighteen million people in Afghanistan are in dire need of humanitarian assistance—a situation that is only worsening as the conflict intensifies. The crisis ranks second on the IRC’s 2021 Emergency Watchlist, a global list of humanitarian crises that are expected to deteriorate the most over the coming year.

“Humanitarian organizations like the IRC are committed to remaining in Afghanistan and continuing to deliver support to its population,” says Aken. “It is vital that world leaders do the same.”

What needs to be done to help Afghans?

World leaders must ensure aid organizations have access to deliver lifesaving support to people who need it. They must also advocate for an immediate ceasefire and support a peaceful settlement to the conflict.

“Afghanistan needs sustained aid and diplomatic support from both Western and regional powers,” says Aken.  "Without this, there is little chance that needs will be met and peace will be found.” 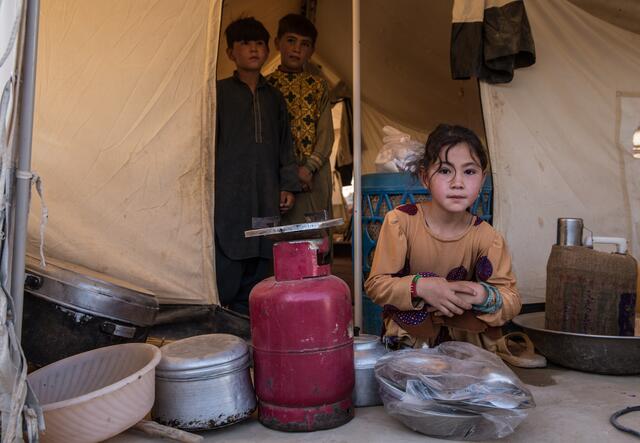 Eighteen million people in Afghanistan need urgent humanitarian assistance—a situation that is only worsening as the conflict intensifies.
Photo: IRC

In addition, these leaders must welcome Afghan refugees to resettle in their countries for a chance to rebuild their lives.

What about Afghans who assisted the U.S.?

The United States created the Afghan Special Immigrant Visa (SIV) program in 2009 to protect Afghan allies, such as translators and interpreters, who risked their lives helping U.S. troops in their country. However, the program has been plagued by backlogs, leaving tens of thousands of Afghans in limbo. The U.S. has begun relocating a group of Afghan SIV applicants to Virginia, but there are more than 18,000 applications in the pipeline—as well as thousands of Afghans ineligible under this program who are in dire need of protection.

Although it assists a particularly vulnerable group of Afghans, the SIV program is not a solution to the humanitarian crisis in Afghanistan. It represents, at most, 0.02% of those in need.

How is the IRC helping Afghans?

The IRC has been working in Afghanistan since 1988. With over 1,700 staff and volunteers, most of them Afghan, we reach more than a million people in the country each year with education, protection, water and sanitation, emergency response, and economic recovery services.

The IRC is also helping to welcome Afghan SIV applicants arriving in Virginia, providing medical care and other services as they prepare for resettlement by a sponsoring agency.  And we assist newly arrived Afghans and other refugees and asylum seekers to the U.S. through our own network of more than 20 offices across the U.S.

The IRC has launched a $10 million appeal to raise much-needed funds to ensure our teams can continue to deliver lifesaving aid in areas of conflict, as well as to provide emergency cash assistance and protection services for internally displaced people in Kabul.

Donate now to help us support families in Afghanistan and in crisis zones worldwide.