The severity of the situation in Afghanistan brings renewed urgency to the world refugee crisis: The International Rescue Committee is committed to resettling evacuees.

The International Rescue Committee has worked to deliver aid in Afghanistan for 30 years, last year reaching 1 million people with vital services. In recent months, we assisted nearly 1,300 Afghans affiliated with the United States to resettle there.

Although all eyes have been on the Kabul airport, the vast majority of Afghans will remain in their country. The IRC is committed to staying as well, as Afghanistan faces a humanitarian crisis fueled by conflict, climate change and COVID-19.

Through work extending around the globe, the IRC is also supporting the many who have been forced to flee their country. Here is a quick overview of our work in Mexico, Uganda, Pakistan and the United States. 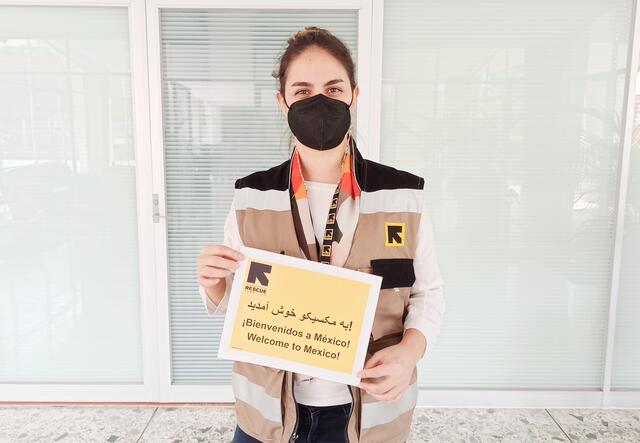 Fatima, a home visiting officer for the IRC in Mexico, helped welcome Afghan evacuees in Mexico City. "Talking with some people from Afghanistan," she says, "they told me how very grateful they are for all the support they have received in Mexico and that this has made them feel part of the community and very welcome."
Photo: IRC

Mexico has hosted refugees throughout its history, including from the Spanish Civil War and several dictatorships in South America, and remains a location that people seeking safety often travel through today.

On August 31, the IRC announced the launch of a rapid emergency response to support a group of 175 Afghan evacuees arriving in Mexico City. During their first hours in the country, the IRC provided COVID-19 testing; delivered emergency medical care; handed out welcome kits that included face masks, hand sanitizer and baby supplies; and facilitated transportation and accommodation. Given the trauma many have experienced, an experienced IRC psychologist was on site upon arrival to provide individuals with immediate psychological first aid.

The IRC also provided mobile phones that can be used to communicate with relatives in Afghanistan and is planning to provide cash cards so evacuees are empowered to meet their needs and can decide what to purchase, ensuring they are able to buy what they need most.

“The main needs are family reunification and lack of resources such as money or basic necessities,” says Mariana, a home visiting officer who helped to welcome Afghan evacuees in Mexico. “Many come with nothing more than what they are wearing, with the concern of what will happen to those who stayed [in Afghanistan] and, in the same way, what will happen to those who managed to leave.”

The government granted evacuees Mexican Humanitarian Visas, allowing them to stay in the country while not affecting future asylum processes in other countries. In addition to providing material support, the IRC is making sure these new arrivals know their rights and is providing cultural orientation to help them adjust to life in Mexico.

Should more Afghans arrive in Mexico, IRC staff will be ready to welcome them. The IRC mobilized again for arrivals in September and is preparing a response for the coming months, while also calling for critically needed funding and international support.

“It is important to act from humanity and connection,” says Mariana. “We have much more in common than there are differences between us.”

Uganda is one of the world’s largest refugee hosting countries, with 1.5 million refugees mainly from South Sudan and the Democratic Republic of Congo. The IRC, which has supported refugees and displaced people in Uganda since 1998, is working with the Uganda government and U.S. embassy to support Afghan evacuees temporarily as they apply for asylum in the U.S., U.K. and other nations. 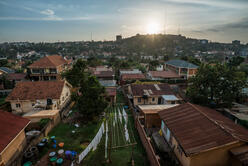 Afternoon in Kampala, Uganda. Uganda is one of the world’s largest refugee-hosting countries.
Photo: Andrew Oberstadt/IRC

Our goal is to provide a timely and comprehensive response to the most urgent needs of people on the move. Upon their arrival at the airport, IRC teams perform triage to identify medical emergencies and carry out health screenings. The evacuees are then transported to hotels, tested for COVID-19, and paired with social workers who provide toothbrushes, sanitary products and a change of clothes. Immigration services provide temporary ID cards.

IRC staff also set up a children’s play area at the registration center, and a clinic within the hotel that provides 24/7 basic medical services and individual and group psychosocial support.

Pakistan's resources and economy have been depleted by COVID-19, and there are already 3 million Afghan refugees resettled in the country during four decades of war. Nevertheless, Pakistan’s official position states that anyone entering the country from Afghanistan with valid documents will be provided with assistance on a humanitarian basis.

The IRC first began working in Pakistan in 1980, providing emergency relief, health care, education, job training and other essential services. Since then, the IRC has responded to all major humanitarian situations resulting from earthquakes, catastrophic floods and displacement, and has expanded to support communities in all four provinces and territories. We are prepared and have the capacity, if invited by the government, to rapidly ramp up our response via local partners to provide cash assistance; support primary and reproductive health care; secure clean water and sanitation; offer job training; create “child-friendly spaces” where children can safely play, learn and start to heal from trauma; and continue working to bring education to children through accelerated learning. 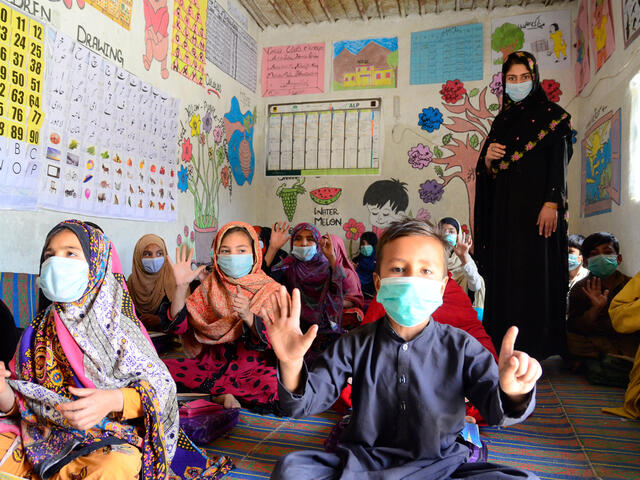 An Accelerated Learning Center in Pakistan. The IRC first began working in Pakistan in 1980 and has since responded to all major humanitarian situations.
Photo: Khumais Hashmi/IRC

Since August of 2021, the U.S. has welcomed over 70,000 Afghans suddenly forced to flee their country, with the International Rescue Committee (IRC) alone resettling 10,000 new arrivals.

The IRC has been resettling Afghan SIVs since the program was established by the  U.S. Congress more than a decade ago, typically receiving 25 percent of all arrivals annually. Alongside our partners, we began responding to the current crisis by working with the government to provide emergency reception support to Afghan Special Immigrants (ASIs) who are relocated to U.S. government facilities in Virginia, Texas, Wisconsin and New Jersey.

As Afghans resettle in the U.S., the IRC will be there to support them. Our more than 20 offices across the United States are helping with immediate needs such as housing, food and medical care, as well as long-term support.  Learn more and find out how you can get involved in your community. 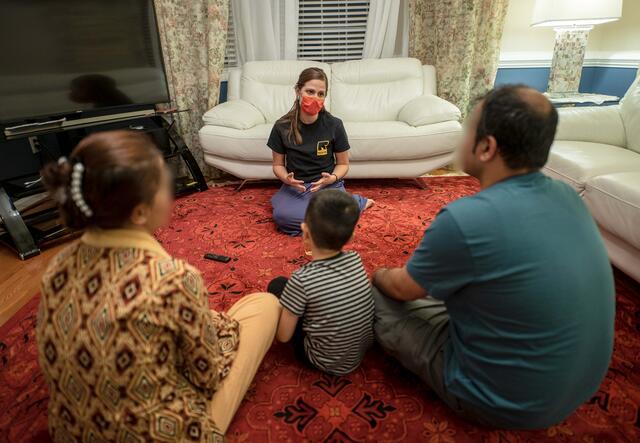 Jessica Carey, an IRC employment specialist, visits an Afghan family who recently arrived in the U.S. at their friend's home in Mechanicsville, VA.
Photo: Andrew Oberstadt/IRC

“World leaders must show solidarity with the Afghan people and humanitarian organizations who are committed to serving them by scaling up funding and using their diplomatic muscle to ensure aid workers can continue to access communities in need,” says Bob Kitchen, IRC vice president for emergencies. “This situation cannot go ignored.”

The IRC is committed to helping displaced Afghans in and out of the country for as long as necessary. Donate today to help Afghan families and people in crisis around the world.