What is next for Afghans who fled to the United States?

Since the Taliban entered Kabul, taking control of Afghanistan, the United States has welcomed over 76,000 Afghans forced to flee their country. Some had to leave because they supported the U.S. mission, and some were human rights defenders, political activists or others at risk under the new government.  According to the Council on Foreign Relations, the evacuation was the largest since the Vietnam War.

“Operation Allies Welcome” has reached a key milestone, but the work of resettlement agencies like the International Rescue Committee has just begun. Find out what’s next for Afghan refugees in the U.S. 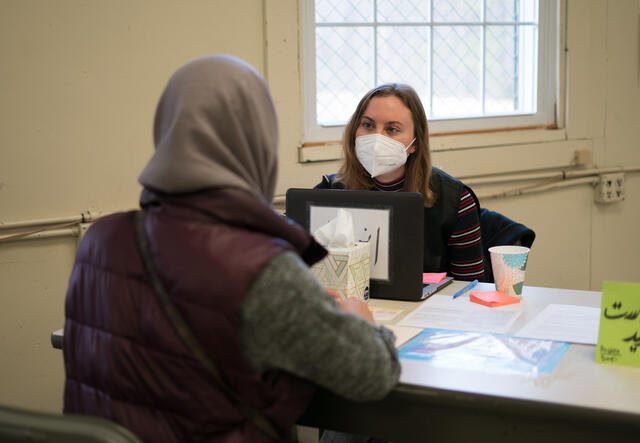 An IRC employee talks to a woman who recently arrived in the U.S. from Afghanistan.
Photo: Andrew Oberstadt/IRC

How resettlement agencies and the U.S. government welcomed over 76,000 Afghans

Afghans who arrived as part of “Operation Allies Welcome” were processed at one of nine “safe havens” set up at government facilities around the United States and operated in part by resettlement agencies like the IRC that have long helped welcome refugees.

At these safe havens, new arrivals were offered temporary accommodations and receive food, medical care and COVID-19 vaccinations. Interpreters were available in 40 languages, including Dari, Pashto and Urdu, to help newcomers through processing and next steps. Afghans remain at the safe havens until they are able to travel to the city or town where they will resettle.

Leaving behind your birthplace where you have spent 50 years of your life is difficult and heart-breaking.

The IRC alone deployed over 1,000 staff and volunteers to support this endeavor. The American public and businesses have stepped up as well, contributing $180,000 in in-kind donations—such as mobile-phone SIM cards and hygiene and baby supplies—to the IRC. The IRC also onboarded 2,000 new volunteers.

"Leaving behind your birthplace where you have spent 50 years of your life is difficult and heart-breaking," says 52-year-old Abdul*, who had to leave his two sons behind in Afghanistan. When he submitted his Special Immigration Visa (VIS) application, Abdul’s sons were under the age of 21 and eligible to be resettled in the United States. Unfortunately, his application was delayed and his sons aged out of eligibility; Abdul was forced to leave them behind in Afghanistan.

"You are going to a place where you do not know about your future except you have to work hard and struggle for your life."

Not only has the U.S. welcomed 76,000 Afghans within a matter of months, the country did so after years of record-low refugee arrivals.

Each year, the president sets a refugee resettlement goal through a policy directive called a "presidential determination.” The Trump Administration set record-lows nearly every year, ending with a resettlement goal of just 15,000 refugees for fiscal year 2021.

President Joe Biden has since raised the resettlement number to 125,000. That number does not include Afghans who came to the U.S. through “Operation Allies Welcome.” 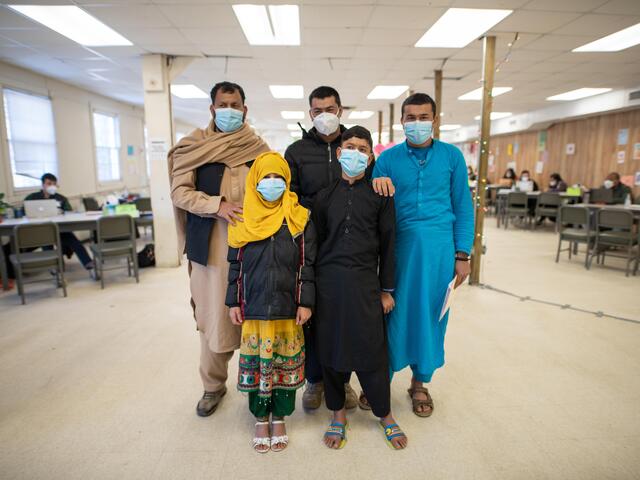 An Afghan family at a U.S. government processing center after arriving in the U.S.
Photo: Andrew Oberstadt/IRC

As one of the nine resettlement agencies that support refugees arriving in the U.S., the IRC has resettled over 11,000 Afghan evacuees since August 2021, as well as thousands of refugees from other countries. This is compared to just 4,000 refugees and other displaced people from around the world the IRC served the year before.

The public overwhelmingly supports the U.S. opening its doors to Afghan refugees. Polling this fall showed that 81 percent of Americans believed that the U.S. should help its Afghan allies come to the country. In addition, both Republican and Democratic governors from 37 states have issued statements in support of the effort.

Will Afghans and other refugees still be coming to the U.S.?

Yes. Although most of the “safe havens” have closed, Afghans forced to flee their country will be welcomed into the U.S. through normal immigration and resettlement pathways, such as the U.S. Refugee Admissions Program. Refugees from other countries will also continue to arrive through the regular resettlement process.

What happens next for Afghans in the U.S.?

Afghan refugees are finding jobs to support their family, enrolling their children in school, learning English if they don’t already speak it, and, generally, integrating into American society and culture. The challenges are many, including a nation-wide housing shortage and an ongoing pandemic that continues to delay access to many services and benefits, especially health care.

As they rebuild their lives, Afghans who recently came to the U.S. are also expected to make big contributions to the U.S. economy. A recent IRC study found that, in just their first year of work, their projected economic contributions will total $1.4 billion. 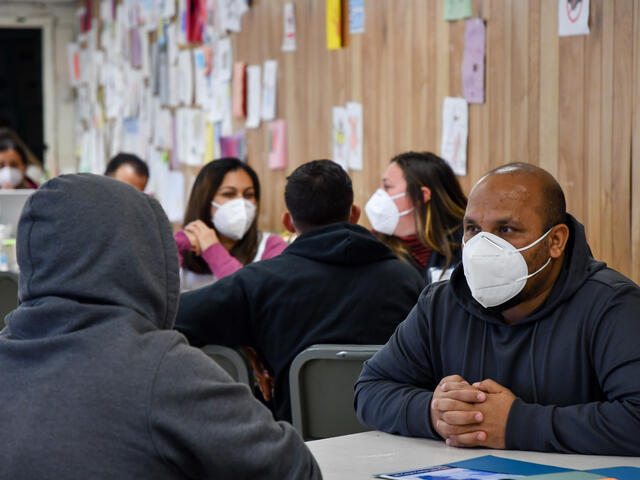 How does the IRC help Afghans arriving in U.S. communities?

We find homes and temporary housing when necessary, provide food (including, in some cities, a “welcome meal” from a local Afghan restaurant), emergency cash and a “welcome basket” with essentials hotels don’t provide. We offer COVID-19 health orientation and help newcomers apply for benefits. We also provide adult and youth education, immigration legal assistance, and support to find housing, employment and health care.

What can the U.S. government do to help Afghan refugees?

In order to bring Afghans to safety as quickly as possible, the U.S. admitted them under a process called “humanitarian parole.” That means that while they are temporarily allowed to stay in the country, they are not guaranteed a path to lawful permanent residence and eventual citizenship. Instead, newly-arrived Afghans have to apply for permanent protection through the U.S. asylum system or other pathways.

The process of seeking asylum is lengthy and complex, and exceedingly difficult to navigate without the assistance of a specialized lawyer. To complicate matters, many Afghans forced to flee their country were advised to destroy identification documents, professional certifications, and other information that could contribute to the evidence needed to support an asylum claim.

As of late July 2022, the Asylum Office had only received about 2,000 asylum applications—a small fraction of the over 76,000 Afghans brought to the U.S.—reflecting the strained capacity of the legal community to support these cases.

I want my children to have a brighter future.

The IRC and other organizations are helping many Afghans through the complicated asylum process–but a more comprehensive solution is needed.

The IRC urges Congress to pass the Afghan Adjustment Act to provide a pathway to lawful permanent residency for Afghan evacuees. Otherwise, when their humanitarian parole expires after two years, Afghans would ose access to employment, health care, and their legal right to reside in the U.S. The law was introduced in Congress in early August of 2022, with bipartisan support.

The Afghan Adjustment Act would also make it easier for people separated from close family members to help their loved ones come to the U.S. In the chaos of the emergency evacuation, some were forced to flee without their spouses or even children. Afghans who endured the trauma of having to flee their homes must not be stuck in limbo as they rebuild their lives in the U.S.

The Afghan Adjustment Act would not be the first legislation of its kind. Congress has passed similar acts at the end of several conflicts and during humanitarian crises. Events such as the Cuban Revolution, America’s withdrawal from Vietnam and both U.S. military action in Iraq led to adjustment legislation which secured safety and a pathway to citizenship for vulnerable populations. 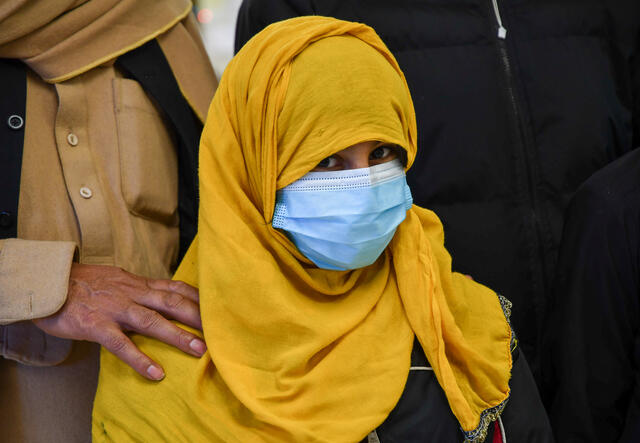 A young woman who just arrived in the U.S. from Afghanistan.
Photo: Anwar Danishyar/IRC

How you can help Afghans in your community

The IRC has 28 offices across the country, where we welcome Afghans, Ukrainians and other refugees as they rebuild their lives in the U.S. Here’s how you can support:

Rent a home to a refugee (if you are a landlord, find out how).