How many refugees will President Biden welcome from Afghanistan and other countries?

Weeks after images from the Kabul airport in Afghanistan focused the world’s attention on people forced to flee their homes, President Joe Biden fulfilled a campaign promise to set a refugee admissions ceiling of 125,000—a considerable increase from recent years.

Even before the crisis in Afghanistan this summer, there were a record 82.4 million displaced people around the world. Get the facts on the U.S. refugee resettlement program and find out what else the Biden Administration can do to help refugees from Afghanistan and around the world.

How many refugees are in the world?

A person is forcibly displaced when they have to flee their home because of crises such as war, violence, or persecution, often without warning. Of the 82.4 million people forcibly displaced around the world last year, approximately 26 million are refugees. That means that they had to cross an international border to seek safety.

Another 48 million were displaced within their own country: 550,000 Afghans were internally displaced this year alone.

Most refugees end up in countries neighboring their own. Refugee resettlement is a process reserved for the most vulnerable, who are then able to move to a third country such as the U.S. They are usually fleeing religious persecution, political oppression or terror. Many are widows, orphans or victims of rape or torture. Some are in danger because they worked alongside American troops or programs in their countries. Others are persecuted based on their ethnic group, gender identity or sexual orientation. Less than 1 percent of the total number of refugees are ever resettled.

How many refugees will President Joe Biden welcome to the country?

To determine the number of refugees who can come into the country each year, the president of the United States sets a refugee resettlement ceiling in consultation with Congress. The process usually takes place at the end of the fiscal year, around October 1, and culminates with the signing of an executive action called a presidential determination (PD)

President Biden has set a refugee resettlement ceiling of 125,000 for fiscal year (FY) 2022, fulfilling a commitment he made during his campaign.

Patrice and Wanyema Mitambo, refugees from the Democratic Republic of Congo, were separated from their daughter Mauwa for five years. This fall, she finally joined her parents in Boise, Idaho.
Photo: Jonathan McBride/IRC

The administration had already taken steps to help by evacuating Afghans at risk, including those who helped the U.S. mission. But there are still many more in danger, not only in Afghanistan, but around the world. The events this summer have also made clear how quickly a new displacement crisis can escalate.

We don’t know what next year will bring.

“Afghanistan is just one example of how refugee crises can suddenly emerge,” said the IRC's senior director of refugee and asylum policy and advocacy J.C. Hendrickson, pointing to China’s crackdown on political dissidents in Hong Kong as an example. “Setting a PD of 125,000 allows the U.S. to react to these crises as they happen. We don’t know what next year will bring.”

What was the refugee resettlement goal last year?

The previous administration set the PD at record lows each year, ending with a ceiling of just 15,000 for FY2021.

President Biden later raised the ceiling to 62,500, but there is still work to be done. His predecessor's actions decimated the resettlement program. Setting a PD of 125,000 will give the government and private resettlement agencies the resources they need to rebuild. 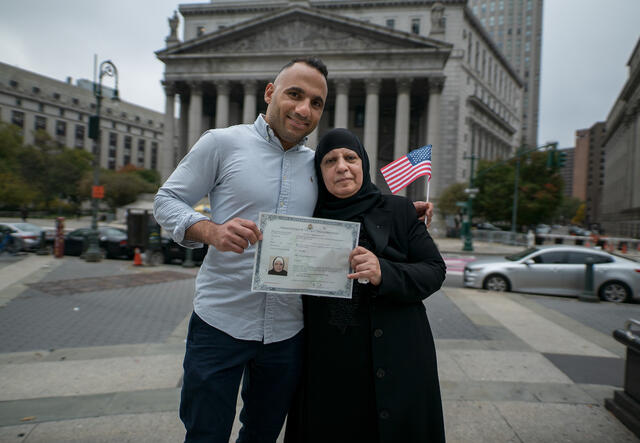 Maha al-Obaidi, a refugee from Iraq living in Queens, poses with her son after she passes her citizenship exam.
Photo: Andrew Oberstadt/IRC

The Biden Administration will also need to ensure that the process refugees face is efficient and based on need, after years of roadblocks put up by the previous administration.

“There were a lot of measures that increased the amount of time it takes refugees to go through the process,” said Hendrickson. “Some of those were discriminatory, and had a disproportionate impact on people of color and Muslims.”

How many refugees did other presidents welcome?

Both Republican and Democratic presidents have opened the U.S.’s doors to refugees and many have chosen to welcome more refugees when crises emerged. For instance, before the modern refugee resettlement program was founded, President Jimmy Carter welcomed 231,700 refugees from Southeast Asia following the Vietnam war.

Presidents Ronald Reagan and George H.W. Bush also set high PDs of over 140,000 to help people in need from Southeast Asia, the Soviet Union and Eastern Europe, and the Balkans, among other regions.

What about the rest of the world? Do other countries resettle refugees?

Yes. In fact, when the U.S. sets an ambitious refugee resettlement goal, it helps to convince other countries to do their part.

Unfortunately, the U.S.’s retreat from resettlement in previous years was mirrored around the globe; only 34,400 refugees were resettled in the entireworld last year.

“The U.S. coming out with a 125,000 PD is going to not only save lives,” said Hendrickson. “It's also going to encourage other countries to step up their commitments in a big way."

It's also going to encourage other countries to step up their commitments in a big way.

The IRC is calling on the Biden Administration to pair a high PD with diplomacy to ensure other wealthy countries, such as the United Kingdom and members of the European Union, do their part.

When the U.S. refuses to show global leadership, we risk other countries closing their borders, shutting down refugee camps, and forcing refugees to return. This can have catastrophic consequences for regional stability and security. But if the U.S. continues to lead on resettlement, this encourages other countries to do more.

Yes! Americans of all political beliefs support welcoming refugees. A YouGov poll earlier this year revealed that 56% of Americans believe the U.S. should welcome at least 95,000 refugees a year.

Just some of the ways people in the US are making Afghan #RefugeesWelcome:

Before President Biden announced the PD for 2022, elected officials from all 50 states signed onto a letter calling for a ceiling of at least that amount.

Support for Afghans in danger is even higher. Recent polling by CBS News/YouGov shows that 81 percent of Americans say the U.S. should help its Afghan allies come to the U.S. Many even want to be a part of the response themselves; the IRC has seen a 47 percent increase in volunteer applications in August and September of 2021 compared to the same timeframe last year.

Thirty-seven governors, among them nineteen Republicans, have issued statements in support of welcoming Afghans to their states. The U.S. Conference of Mayors also issued its own statement.

What else can the U.S. do to support Afghans and refugees around the world?

Many Afghans who arrived in the past few months, however, have been given a status called “humanitarian parole.” That means that while they are temporarily allowed to stay in the country, they are not guaranteed a path to legal permanent residence and eventual citizenship. Instead, they have to apply for permanent protection through the U.S. asylum system, which is already facing a backlog of cases. This pathway is made even more complicated by the fact that many Afghans may have been advised to destroy professional and identifying documents and other information that could otherwise be used to pursue an asylum claim.

Afghans deserve an opportunity to rebuild their lives without the fear and limitations associated with uncertain immigration status.

Afghans deserve an opportunity to rebuild their lives without the fear and limitations associated with uncertain immigration status. Congress can give them this opportunity by passing the Afghan Adjustment Act, legislation that has bipartisan support and that would ensure relocated Afghans can simply and quickly adjust their status to become legal permanent residents.

There are also a number of ways that the Biden Administration can improve the U.S. refugee admissions program. For one, it can ensure effective and efficient processing so applicants for resettlement are not stuck in dangerous situations because of bureaucracy. It can also strengthen the services that help refugees thrive once they are in the U.S and increase community participation in resettlement, allowing more individuals and private organizations to help welcome refugees. This lets the U.S. resettle more refugees, and helps to build welcoming communities and grassroots support for refugee resettlement. 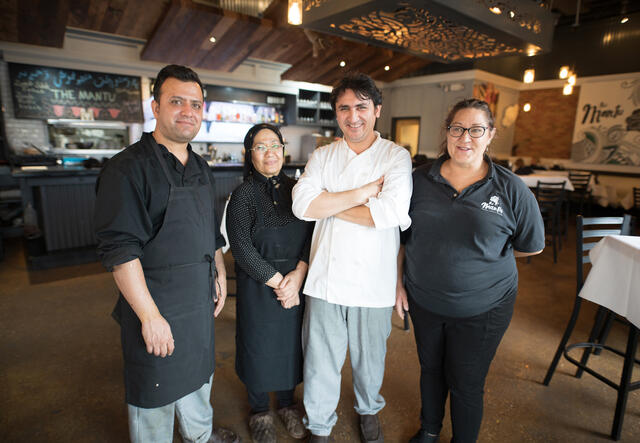 Chef Noori, an Afghan refugee, opened The Mantu, a modern Afghan fine dining restaurant in Richmond, Virginia. Today, he is working with the IRC to prepare special meals for Afghans as they arrive to the U.S.
Photo: Andrew Oberstadt/IRC

What can I do to help Afghans and other refugees?

It is critical that our elected officials know how many Americans support welcoming Afghans. Contact the Biden Administration today to urge it to scale up humanitarian assistance, press for safe and unhindered access for humanitarian actors, ensure safe passage for Afghans evacuating the country, provide aid and support to neighboring countries who are hosting Afghans, and continue to offer safe haven to Afghan refugees through resettlement.

Many of the IRC’s 20+ offices across the United States are helping newly-arrived Afghans, including those who worked with the U.S. in Afghanistan. These families often arrive with few belongings and need housing, food, home goods and other basics as they get on their feet.

Even if your local office is not currently welcoming Afghan families, you can connect to help refugees and other new Americans. Find out how you can help in your community or make a donation to support the IRC's work around the world.