President Biden lifts a Trump-era limit on refugees: the facts

After four years of Trump Administration policies that harmed people seeking safety, President Joe Biden pledged to restore America’s long tradition of welcome. Following some critical first steps during his first 100 days in office, he increased his predecessor’s record-low cap on refugee admissions on May 3.

This is welcome news to thousands of refugees who were left in precarious situations. Here’s what you need to know: 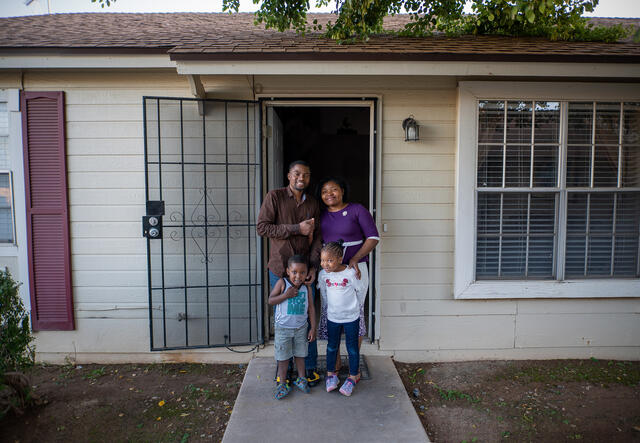 Robert Sebatware and his wife Esther were resettled by the IRC in Phoenix, Arizona with their two young children. The couple were welcomed to build new lives in the U.S. after escaping war in the Democratic Republic of Congo and living 20 years in a refugee camp in Uganda.
Photo: Andrew Oberstadt/IRC

Refugees are people fleeing war, persecution and political upheaval who have crossed international borders to seek safety. Most who have a home to go back to return when peace and stability are restored. Others live for years in refugee settlements, as many host countries are unable to accept refugees permanently.

An official entity such as a government or the United Nations refugee agency (UNHCR) decides whether a person seeking international protection meets the definition of a refugee, based on well-founded fear.

There are more than 26 million refugees worldwide, but just 1%—those in greatest danger—have the chance to rebuild their lives in the United States or another resettlement country.

Learn more about who refugees are.

Are people crossing the U.S.-Mexico border for safety refugees?

People crossing the southern U.S. border fleeing violence and persecution are more accurately called asylum seekers.  An asylum seeker is someone who is seeking protection from dangers in their home country, but whose claim for refugee status hasn’t been determined by an official entity.

Asylum seekers must arrive at or cross a border to apply for protection in that country. Then, they must be able to prove to authorities that they meet the criteria to be covered by refugee protections. Crossing an international border for asylum is not illegal and an asylum seeker’s case must be heard, according to U.S. and international law.

Learn more about the difference between refugees and asylum seekers. 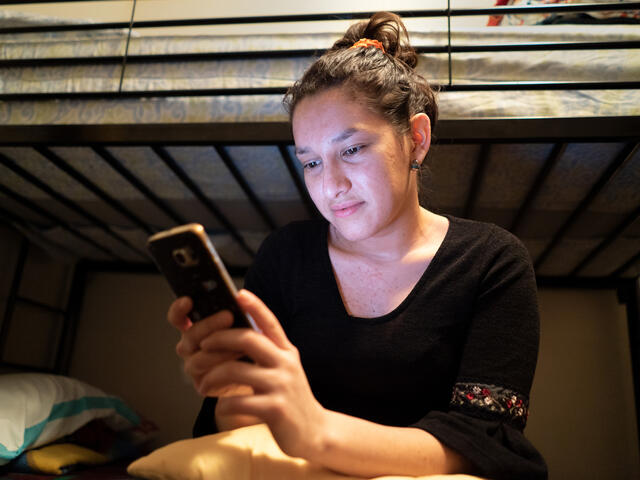 How are refugees vetted to come to the U.S.?

Most refugees who enter the U.S. refugee admissions program are referred by the U.N. refugee agency (UNHCR), a U.S. embassy or an approved humanitarian aid organization. The three-year process includes exhaustive screening by U.S. government agencies including the Department of Homeland Security and the FBI.

In fact, the hardest way to come to the U.S. is as a refugee.

Learn more about how the U.S. refugee vetting process works.

How many refugees come to the U.S. each year? Who decides?

The U.S. president consults with Congress and authorizes an annual target for refugee admissions through a presidential determination.

That administration also restricted who could resettle in the U.S., by putting discriminatory admissions policies in place that targeted people from Africa and the Middle East. 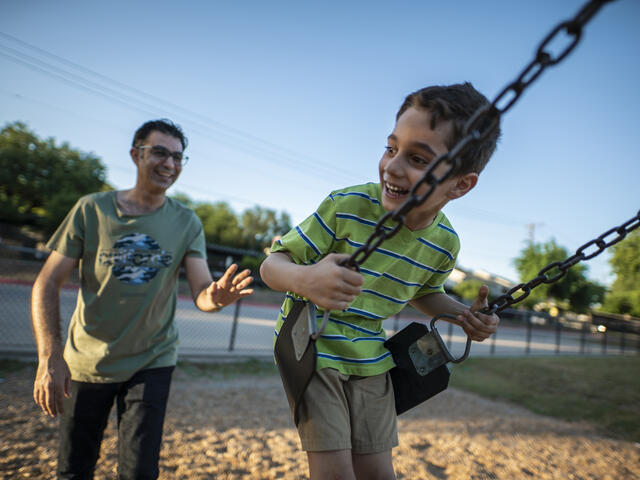 Junaid, his wife and their two sons fled Iraq in 2017 and were resettled in Dallas by the IRC. Junaid was hired by a hotel as a housekeeping administrative assistant after learning job skills for hotel and restaurant work in the IRC's Hospitality Link program.
Photo: Andrew Oberstadt/IRC

What was President Trump’s refugee admissions cap for 2021?

Learn more about how the Trump Administration pulled back America’s welcome mat from Day One.

How many refugees does President Biden aim to welcome in 2021?

62,500 for fiscal year 2021, after initially maintaining the Trump-era admissions cap for his first three months in office.

On April 16, President Biden signed an emergency presidential determination that removed discriminatory refugee admissions categories set by the previous administration—but did not lift his predecessor’s admissions cap of 15,000 refugees for the 2021 fiscal year. The move, which would have left thousands of refugees in limbo and in need of safety, deeply disappointed humanitarian organizations, including the International Rescue Committee (IRC).

“This is a time of unprecedented global need, and the U.S. is still far from returning to its historic role of safe haven for the world’s persecuted and most vulnerable,” IRC president and CEO David Miliband said in an April 16 statement.

A few hours later, the Biden Administration issued a follow-up statement indicating it would provide a final refugee admissions number for the fiscal year on May 15.

Midway through the fiscal year, only 2,050 refugees had been admitted to the U.S., and President Biden was on track to resettle the lowest number of refugees of any U.S. president.

However, on May 3, the president revised the refugee admissions goal for fiscal year 2021 to 62,500.

That increase came after Americans across the country—including grassroots activists who took action with the IRC—called on the administration to keep its promise to restore America’s legacy of welcome.

“President Biden’s decision is good for America and good for refugees,” said David Miliband. “We welcome the bold steps to build back refugee protection after four years of deeply damaging policy.”

Yes. President Biden pledged to admit 125,000 refugees during his first year in office. Just weeks after his inauguration, as one step toward that goal, he announced plans to welcome half that number by the end of the fiscal year.

On February 12, the administration proposed, and bipartisan members of Congress affirmed, an emergency revision to the previous administration’s arbitrary, restrictive, and discriminatory refugee admissions policy. The administration argued that, “To respond to all of these unforeseen and urgent situations, a revised target of 62,500 is proposed and is justified by grave humanitarian concerns and is in the national interest.” 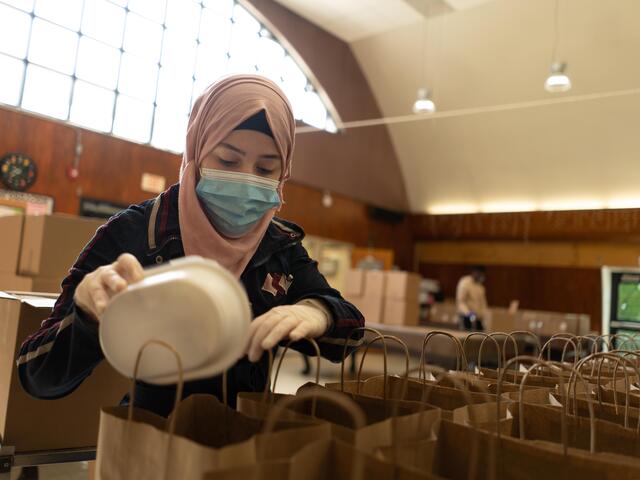 Rania Abou, a 19 year-old refugee from Syria, distributes meals to people experiencing food insecurity in Elizabeth, NJ during the COVID-19 pandemic. She was resettled with her father and three brothers by the IRC in 2019.
Photo: Andrew Oberstadt/IRC

However, while it allowed the Trump Administration’s record-low admissions goal of 15,000 to remain in place, families remained separated, and thousands of refugees were left waiting in limbo. Never before had a president set a refugee admissions ceiling lower than what their administration proposed to Congress.

While the IRC welcomed the news that the Biden Administration would reassess the current refugee admissions cap of 15,000 on May 15, it urged President Biden to increase that cap to 62,500. “State and local governments and resettlement agencies are ready to welcome refugees and facilitate resettlement across the country,” the IRC said in its April 16 statement.

The revised emergency presidential determination of 62,500 refugee admissions President Biden announced on May 3 fulfils a promise to people seeking safety who are ready to build a new life in America.

Why did President Biden initially keep the Trump-era refugee cap?

The Biden Administration said it needed time to rebuild a U.S. refugee resettlement system “decimated” by the previous administration.

The revised presidential determination represents a step on the road to rebuilding the U.S. Refugee Admissions Program and setting an ambitious goal of welcoming 125,000 refugees next year.

“The road to fully rebuild is long, and we will continue to face challenges, but at the IRC we are ready to roll our sleeves up and partner with the administration to return America to a position of global leadership on refugee protection,” said David Miliband. 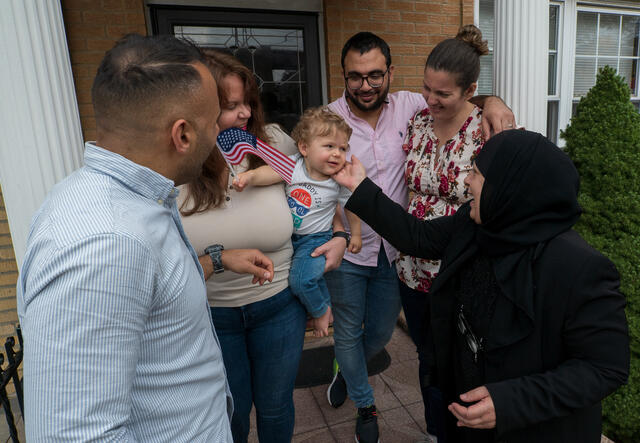 Maha al-Obaidi, a refugee from Iraq, with her son Tameem, his American wife and their young son in New York. Maha recently became a naturalized U.S. citizen.
Photo: Andrew Oberstadt/IRC

How many refugees are waiting for resettlement?

The U.N. refugee agency has identified 1.4 million people in desperate need of resettlement.

More than 100,000 refugees are in the U.S. resettlement pipeline. Over 35,000 have already been vetted and received conditional approval to resettle in the U.S, but now find themselves in limbo. Among them are more than 700 refugees who have had their flights canceled at the last minute. Some had sold their belongings in anticipation of the move.

Before their travel plans were put on hold, many of these refugees were looking forward to reuniting with family members in the U.S. after years apart.

Why should the U.S. admit more refugees?

Welcoming refugees is the right thing to do at a time when more people around the globe are uprooted by conflict and crisis than at any time since World War 2. But did you know that it also benefits the U.S.?

Refugee resettlement contributes to economic growth and creates jobs: As refugees rebuild their lives in communities across the country, they become business owners, consumers and taxpayers.

“After a torrent of confusing and xenophobic policy over the last four years, Americans and refugees alike are looking to the Biden Administration to right the course, restore access to resettlement for those most in need, and galvanize other countries to increase their resettlement commitments,” said Hans Van de Weerd, IRC vice president of Resettlement, Asylum and Integration.

Learn more about why America should accept more refugees.