How the U.S. refugee vetting and resettlement process really works

The United States has a long tradition of sheltering those fleeing conflict and persecution. But the Trump Administration turned its back on that legacy, with refugee arrivals declining by 85% and hitting record lows nearly every year.

President Joe Biden has a chance to rebuild the refugee resettlement program, which has historically enjoyed bipartisan support. The change would not only offer hope to the most vulnerable in a time of urgent need; it would help to fix the U.S.’s reputation abroad and incentivize other countries to take in refugees.

It’s important to remember that refugees are fleeing violence and persecution—in Syria, Eritrea, Bhutan and other countries in crisis—and that they are seeking safety and the chance to move their lives forward.

The International Rescue Committee and other resettlement agencies support newly arrived refugees by providing immediate aid, including food and shelter. We also provide services to assist them on their paths to becoming permanent U.S. residents and eventually citizens. Below are the steps the U.S. takes to welcome some of the world’s most vulnerable people: 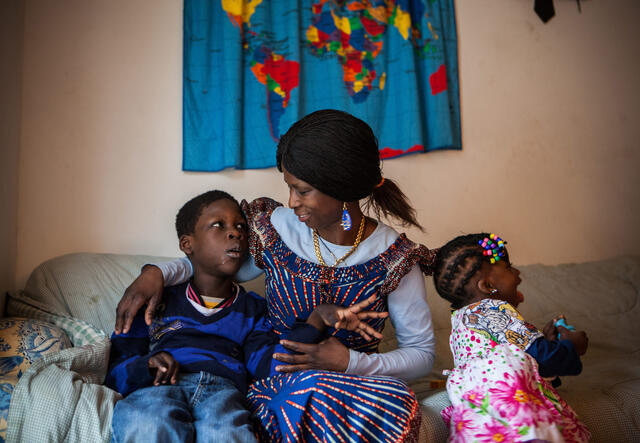 Nestorine Lakas sits with her son Eric, who has severe cerebral palsy, and her daughter Carol in their Atlanta apartment. Since she arrived from war-torn Central African Republic in 2010, Nestorine has been learning English, job skills and basic computer literacy so she can support her family as a single mom and learn how to manage her son's health needs. "The reason my child is still alive is because I came as a refugee,” Nestorine says. “I hope one day he might walk."
Photo: Evelyn Hockstein/UNHCR

A refugee is a person forced to flee his or her home because of war or political upheaval and seek safety in another country. They have well-founded reasons to fear persecution because of their race, religion, nationality, membership in social group or their political opinion. Refugee status is determined by the United Nations.

Referral to the U.S.

Most refugees who enter the U.S. refugee admissions program are identified and referred for resettlement in the U.S. by the United Nations refugee agency (UNHCR), a U.S. embassy or an approved humanitarian aid organization.

The U.S. is just one of 29 resettlement countries. Out of the 26 million refugees in the world, only one percent are considered for resettlement worldwide.

The Resettlement Support Center (RSC), run by agencies like the IRC, through cooperative agreements with the Bureau of Population, Refugees, and Migration, help refugees and their families referred for admission under the U.S. Refugee Admissions Program to complete applications for the Department of Homeland Security (DHS). This process includes compiling personal data and background information for security clearance. 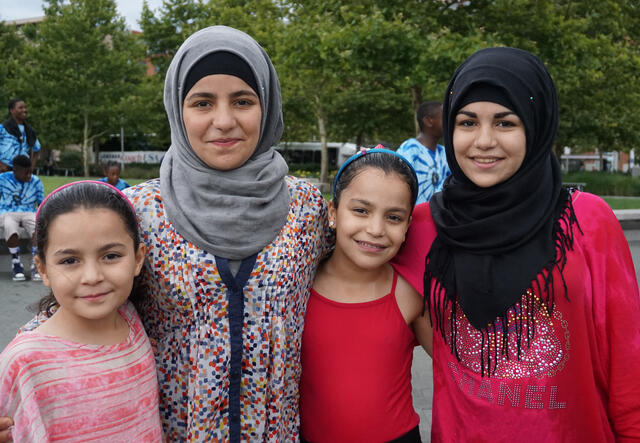 The daughters of family resettled in Baltimore from Syria. Because they had no relatives or friends in the U.S., the IRC became their lifeline, arranging English classes and providing employment support. Six months after they arrived, their oldest daughter made her school's honor roll.
Photo: Camille Wathe/IRC

Refugees are vetted more intensively than any other group seeking to enter the U.S. In fact, the hardest way to come to the country is as a refugee.

Once those refugees most in need are registered by the U.N. refugee agency, the U.S. then hand-selects every person who is admitted.

The U.S. resettlement program gives priority to refugees, usually vulnerable families, who have been targeted by violence. The U.S. does not recognize as refugees people who have committed violations of humanitarian and human rights law, including the crime of terrorism, as refugees. They are specifically excluded from the protection accorded to refugees. 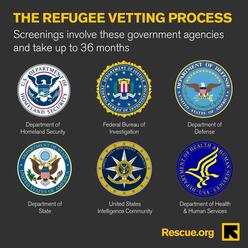 Security screenings are intense and led by U.S. government authorities, including the FBI, the Department of Homeland Security, the Department of Defense, and multiple security agencies. The process typically takes up to 36 months and is followed by further security checks after refugees arrive in the States. Refugees undergo biographic and biometric checks, medical screenings, forensic document testing, and in-person interviews.

I believe the screening we underwent was so intense, so thorough and so long that it would be impossible for militants to come here.

- Linda, a Syrian refugee in Baltimore, describing her family's rigorous vetting process for The Washington Post.

Four refugees resettled with help from the International Rescue Committee have described the vetting process they went through.

Once refugees have been cleared for resettlement, the U.S. government works with the IRC and eight other national resettlement agencies to help them restart their lives in America. Refugees may be placed in a city where they have relatives or friends, or where there’s an established community that shares their language or culture. Other considerations include the cost of living and a community’s ability to provide medical services. However, as legal U.S. residents, refugees may live in any state they choose.

Before refugees leave the countries where they temporarily reside, they sign promissory notes agreeing to reimburse the U.S. government for travel costs. They also attend a class to learn about what to expect when they arrive in their new country, with briefings on American culture, U.S. laws, health benefits and other critical information. Officials also conduct a final screening and additional security checks before departure.

Arrival in the U.S.

Refugees are usually greeted and welcomed at the airport by case workers from resettlement agencies like the IRC to ensure their transition is as comfortable as possible. Agencies are responsible for finding a suitable, affordable home for refugee families, something many of these refugees have gone without for years. Families also receive basic furnishings, food and other immediate assistance. 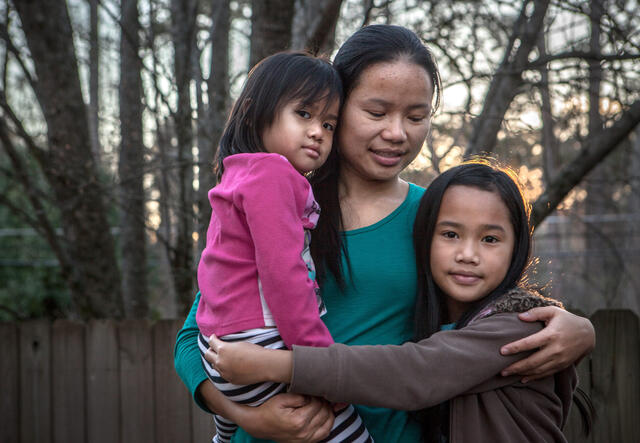 Klaw Htoo with her daughters Gloria and Sophia at their new home in Atlanta. Klaw and her family were forced to flee Myanmar (also known as Burma) and they lived in a refugee camp in Thailand for nine years. Klaw arrived in the U.S. in 2007 with her oldest daughter while pregnant with Gloria. Klaw worked as a case worker for the IRC and then went to work in the medical field. She became a U.S. citizen in 2013.
Photo: Evelyn Hockstein/UNHCR

Getting on their feet

For the first 90 days, resettlement agencies work with state and local governments and community organizations to help new arrivals settle into their communities.

Refugees are introduced to their local health system. Although they have had thorough check-ups before entering the U.S., they receive additional examinations by medical professionals in their new communities.

Once they acclimate to their new environment, refugees often thrive and contribute to their communities, building their careers, purchasing homes, gaining citizenship.

America’s still the land of opportunity for many people who started from nothing, and now they are successful.

As the head of one Syrian family resettled in Dallas says:

“I’ve been here for a short time, but even in this short time, you notice that America is a better place than many other countries. There is a real opportunity to start over and grow. America’s still the land of opportunity for many people who started from nothing, and now they are successful. I know I can do something here.”

Learn more about refugee resettlement in the United States 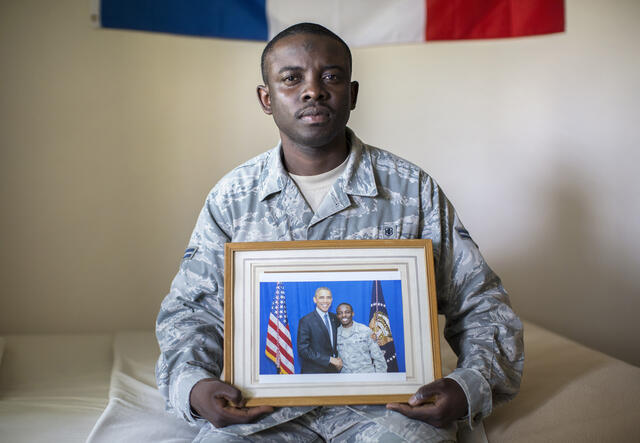 Nelson Versailles Rieu, Airman First Class, holds a photo of himself shaking hands with President Obama. Just five years ago, Nelson fled his home in war-torn Republic of Congo and was resettled by the IRC in Tucson. After earning his high school equivalency, Nelson joined the U.S. Air Force in order to give back to the country that gave him a "safe place to live and freedom."
Photo: Brian Harkin/IRC

How can President Biden support refugees?

Just as the Trump Administration decimated the refugee resettlement program, President Biden can rebuild it. However, when the Biden Administration announced that it would remove discriminatory admissions categories set by the Trump Administration in April of 2021, it also maintained the Trump-era record-low refugee admissions goal of 15,000 for Fiscal Year 2021. The IRC is deeply disappointed in this development, which leaves thousands of people in limbo and in need of safety. The president must increase the refugee admissions cap to 62,500, as his administration proposed and justified to Congress in February. Learn more.