Forty-one million people are on the brink of famine; a record 80 million have been forced to flee their homes. In Afghanistan, to name just one of the world’s most pressing crises, the near collapse of the state and economy have left millions of ordinary Afghans at risk of starvation.

While the Biden Administration has taken positive steps to address these urgent issues, much more remains to be done. Find out why the president needs to think big in order to help the record number of people facing conflict and crises around the world.

What has President Biden already done to help refugees, Afghans and other people facing crises? 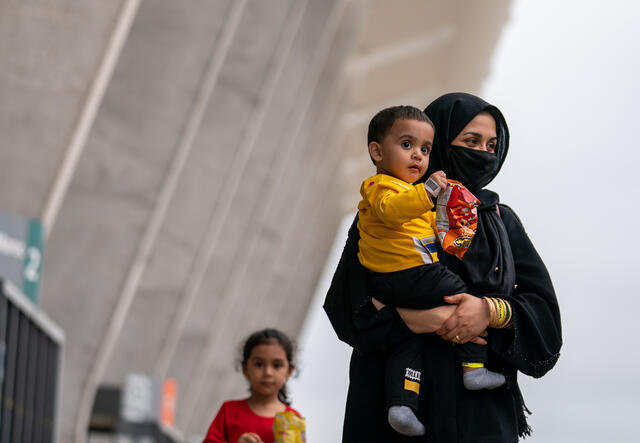 A woman and children who fled Afghanistan after they arrived at Dulles International Airport near Washington, DC.
Photo: Getty

When the Taliban took control of Afghanistan’s government in August 2021, the world was shocked by images of people crowding the Kabul airport desperate to leave the country.

President Biden moved quickly to help U.S. allies and other Afghans who were no longer safe in their homes. This required swift and bold action; the infrastructure to welcome refugees had been decimated under the Trump Administration and the new administration had to think creatively to respond to the urgent need. The U.S. welcomed more than 70,000 Afghans within a matter of months.

Find out how you can welcome Afghans and other refugees in your community.

Set a refugee resettlement ceiling of 125,000 after years of record-low numbers

In an annual process called the presidential determination, or PD, the president sets a cap on the number of refugees to be resettled in the country. President Biden took office after four years of record-low numbers, ending with a PD of just 15,000 for fiscal year 2020. 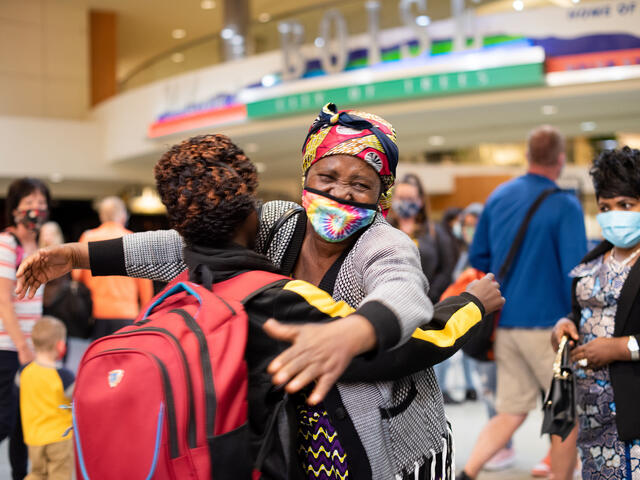 Wanyema Mitambo, a refugee from the Democratic Republic of Congo, is reunited with her daughter Mauwa and four grandchildren after five long years apart.
Photo: Jonathan McBride/IRC

The president has since set the PD for fiscal year 2022 at 125,000, fulfilling a promise he made during his campaign. This is a critical step toward supporting the over 80 million people displaced around the world.

Restricted arm sales to Yemen, a necessary step to protect civilians in the conflict

After six years of war, Yemen faces one of the largest humanitarian crises in the world. While the conflict continues to devastate the economy and destroy health care, education and other critical systems, the U.S.’s decision to end support for offensive operations in Yemen, including arm sales for the Saudi-led coalition, was a necessary step to help end the violence.

Expanded the COVID-19 pandemic response beyond the U.S.’s borders

Upon taking office, the administration quickly acknowledged that the pandemic response could not stop at the U.S. border. It rejoined the World Health Organization (WHO), increased its resources and launched the Global VAX program to provide vaccines to people living in poor and conflict-affected regions. In addition, the administration agreed to a United Nations Security Council resolution to facilitate more cooperation to increase access to vaccines. 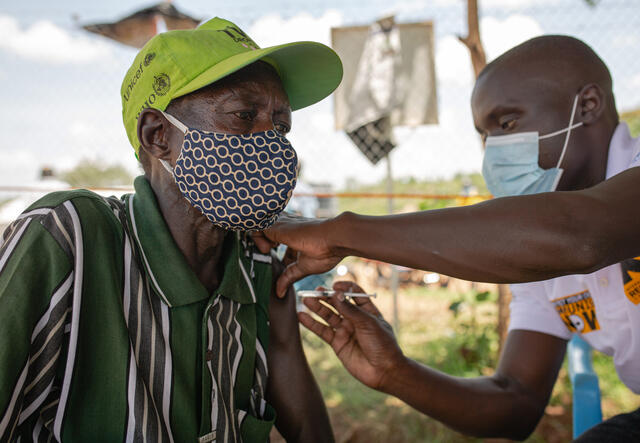 What does President Biden still need to do to help refugees, Afghans and other people facing crises?

Despite these positive steps, the Biden Administration must do much more to put words into action, applying the lessons learned from its bold actions to six issues that urgently need addressing:

The Taliban’s control of the country has led international donors to immediately suspend most non-humanitarian funding and freeze billions of dollars’ worth of Afghan assets. Without this funding, basic services have collapsed along with the economy, as the country faces record hunger and near-universal poverty. Nine million people are on the brink of famine.

Afghanistan has been spiraling towards catastrophe since the suspension of most foreign aid & freezing of Afghan assets. @RESCUEorg is calling on the US to address the economic crisis that is driving suffering today. Support our call here: https://t.co/oSwkbrbb9V#AfghansCantWaithttps://t.co/g9wRZbmKpC

While the U.S. has increased humanitarian aid and moved quickly to create humanitarian exemptions to its sanctions, the administration must also take action to loosen the current chokehold on the economy that is endangering the lives of 40 million people. This includes funds to pay the salaries of civil servants, including teachers and nurses, liquidity for banks so Afghans can access cash to pay for food and other basic items, and greater clarity on sanctions so banks and commercial actors will engage in Afghanistan without fearing legal risk.

Provide durable, not temporary, support for Afghans rebuilding their lives in the U.S.

The administration must expand on actions already taken to welcome Afghans to ensure these new arrivals are able to rebuild their lives in the U.S. These supports should be grounded in the lived experience of refugees and should focus on housing, jobs, language access and similar investments. 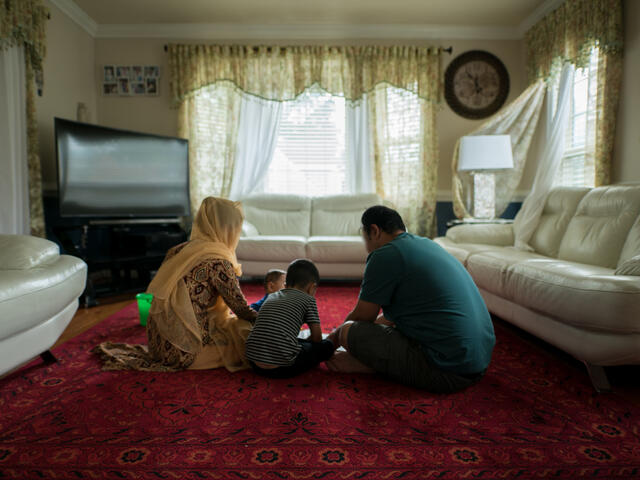 A family in their new home in Virginia after fleeing Afghanistan.
Photo: Andrew Oberstadt/IRC

President Biden should also work with Congress to pass the Afghan Adjustment Act so newly arrived Afghans have a path to permanent residency and citizenship.

Work with world leaders to confront the refugee crisis globally

The Biden Administration has set a strong example by committing to resettle 125,000 refugees and 70,000 Afghans - for a total of nearly 200,000. Wealthy nations can step up by matching this commitment and resettling an additional 200,000 globally each year. The US should also lead International financial institutions and other major donors in responding to the generosity of refugee-hosting states like Uganda, Lebanon, and Colombia by providing greater funding and debt relief to countries that step up to support refugees and adopt welcoming policies, like including refugees in their schools and health systems.

End Title 42, “Remain in Mexico” and other policies that send asylum seekers back to danger 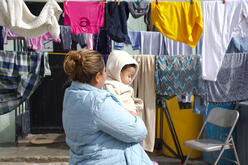 Alma, an asylum seeker from Guatemala, and her daughter wait for their laundry to dry at a shelter in Ciudad Juárez.
Photo: Hope Arcuri/IRC

The U.S. asylum system can best be described as broken and brutal, as President Biden continues to keep in place some of the most severe Trump Administration policies targeting asylum seekers at the U.S.-Mexico border.

Seeking asylum is legal. But under a policy called Title 42, most people seeking safety are turned away under the guise of public health–without ever getting a chance to make their case. Those able to apply for asylum are forced to wait out their cases in dangerous conditions in northern Mexico through a policy called “Remain in Mexico.”

The U.S. has the resources and capability to treat asylum seekers with dignity. The Biden Administration should immediately end draconian and inhumane policies, strengthen policies and systems that offer protection for asylum seekers during their journey, and close this dark chapter in U.S. history.

Learn more about what is happening at the U.S.-Mexico border.

As the quickly spreading Omicron variant shows, we must tackle the pandemic everywhere if we are to end it anywhere. The U.S. must continue to lead on vaccine equity and ensure the front-line responders delivering vaccines have the resources they need.

That said, it would be a grave error to focus only on the current emergency. In order to confront future pandemics, the president should support the establishment of a Global Health Threats Council consisting of the leaders of countries around the world. The administration should also ensure the council has the funds it needs to move swiftly as new variants of COVID-19—and new diseases—emerge.

Embrace diplomacy to end the conflict in Yemen 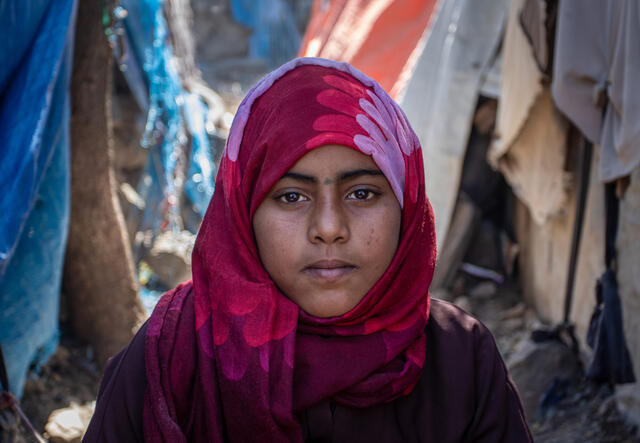 Na'aem, a young girl who lives in a camp for internally displaced people in Yemen.
Photo: Saleh Ba Hayan/IRC

Despite a good start, momentum for a more permanent solution in Yemen is waning and world leaders are turning their attention to other crises.

The conflict has already destroyed health, education and other critical systems. The effects of war, compounded by unstable economic conditions and the ongoing COVID-19 pandemic, have resulted in upwards of 54% of the population facing crisis or worse levels of food insecurity. This cycle of crisis cannot be resolved until the conflict is addressed and Yemeni economic life is allowed to continue. Additionally, bureaucratic impediments to humanitarian access continue to be ongoing barriers to the delivery of humanitarian aid.

Without diplomatic progress, the war will continue and Yemenis will suffer. The US and other international supporters to the warring parties must prioritize efforts to secure a ceasefire and use all diplomatic leverage to achieve it.

Afghanistan recently topped the IRC's annual Watchlist of countries most likely to see deteriorating humanitarian crises. Ninety-seven percent of the population is at risk of descending into poverty and 9 million people are on the brink of famine.

Contact President Biden today to ask that the administration step up to support the Afghan people by both scaling up humanitarian aid and addressing the economic crisis that is driving suffering today.