Afghans arriving in the U.S. look to the future

Instability is compounding a decades-long humanitarian crisis in Afghanistan. Over 18 million people are in need of aid and 550,000 have been displaced this year alone.

Afghans who assisted the United States government are among the groups in particular danger. For this group, programs such as the Special Immigrant Visa (SIV) and Priority-2 (or P-2) visas offer the chance to start over in the U.S.

These pathways have not been sufficient to help everyone in need. Only 16,000 Afghan SIVs were issued from 2014 to July of this year, despite the availability of 26,500 total authorized visas during that time. The P-2 program only applies to people who are able to flee to a third country—an impossible feat for many. Lastly, the vast majority of Afghans will remain in the country, making it critical that countries like the U.S. continue to support humanitarian aid. Refugee resettlement should be one component of a broad and robust humanitarian strategy to protect both those fleeing for their lives and those who cannnot leave the country.

Families that do make it to the U.S. arrive with few belongings and need housing, food, home goods and other basics as they get on their feet. However, they also often bring skills, experience and the determination for their family to succeed.

The International Rescue Committee (IRC) has been helping to welcome Afghans arriving in cities across the U.S. (Find out how you can help in your community.) Below, six Afghan men who recently arrived in the U.S. describe their journeys and hopes for the future.

We hope to live in this country and do our best as citizens.

When asked about the situation in Afghanistan, Taj, age 36, points to the many people displaced inside the country who are acutely in need of food, water, health care and other aid.

“These refugees are all out there in the middle of nowhere asking for help,” he says.

A painter in Afghanistan, Taj arrived with his wife, 3-year-old son and 10-month-year-old daughter. He says that he’ll do whatever work best helps him support his family, but his first priority is learning English and ensuring his family also can access education.

“We hope to live in this country and do our best as citizens,” he says. “Just like any other citizens of the United States.” 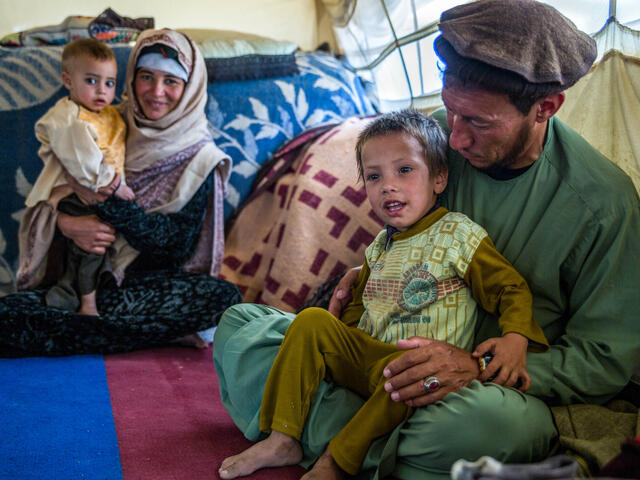 A family forced from their home due to drought. Afghanistan is facing an extreme drought and COVID-19 in addition to the recent conflict. Around 230,000 have been internally displaced in Afghanistan in the past two months alone—a 73% increase since June.
Photo: IRC

Ahmad, age 33, worked as a translator for the U.S. government and traveled to the U.S. with his wife. The couple is heading to the state of Washington, where Ahmad has an uncle.

“[In Afghanistan], everybody tries to hide what they’re doing or what they have been doing in the past,” he says, “especially the translators and interpreters like me, who worked with the U.S. forces.”

Ahmad was happy with the welcome he received in the U.S, though he notes that many of his compatriots may be feeling “culture shock” in their new home. Still, he is optimistic for their future.

“I’ll try my best to be ready to start working as soon as possible,” Ahmad said of his own plans, noting that both he and his wife have computer science degrees they hope to put to use. “The first thing I think I’ll do is take driving lessons so I’ll be ready for a job”

A former interpreter with the U.S., 42-year-old Javid arrived with his wife, son and three daughters. The family is planning to stay in Virginia to start their new life, and they look forward to benefiting from the educational opportunities the U.S. offers

Education has always been important to Javid; he attended medical school for seven years, pursued a Master of Public Administration degree and worked in telecommunications.

“I want to meet with a consultant to see if it’s better to finish my medical degree or work in telecommunications,” he says. “My best hope is to study.”

“My daughter, Sahar, she is very talented,” he says. “Sometimes I say she is like a small computer. She is so intelligent. And so is my son. I wish for them to study and to have a bright future in the United States.”

Life is the most important thing. That’s why I chose to leave, to save my life.

Leia, age 25, arrived in the U.S. with his wife. He worries about his extended family in Afghanistan who want to leave the country but cannot.

“I couldn’t go anywhere without risk,” he says of life in his homeland.

Leia is looking forward to building his new life. He has a degree in computer science and worked as a manager back in Afghanistan, but stresses he’ll do whatever job it takes to support his family.

“Life is the most important thing,” he says. “That’s why I chose to leave, to save my life.”

An interpreter for the U.S., Khan, age 44, was interviewed for his U.S. visa over a year ago but was just able to leave Afghanistan with his wife and two children. In addition to the safety his new home offers, he’s looking forward to getting his kids back in school after COVID-19 forced them to stay home.

“Because of COVID-19, my daughter already missed one year,” he says. “She was in the 12th grade. 2020 was the last year for her. But unfortunately, she did not attend school because of the lockdown.”

Khan is grateful for the reception he’s received in the U.S. so far. He was on the same flight as one of his friends, another interpreter, and their whole group received applause from Americans greeting them when they arrived.

“That time was very happy for me,” he says.

“My hope for Afghanistan is my hope for any human,” Rahim says. “To have peace and stability. To live a normal, peaceful life, that’s our hope for the Afghan people.”
Photo: Laurence Tan/Getty Images

Rahim, a 41-year-old electrician, arrived in the U.S. with his wife and two kids. The long trip started with his first-ever airplane flight. After they arrived, he was impressed with the welcome that the family received.

“I will do my best with whatever experience and education I have,” Rahim says of his plans for his life in the U.S. He says he will continue working as an electrician if that turns out to be the best path. He also hopes his children will find opportunity and the chance for a good education in their new home.

As he builds a life in the U.S., Rahim will also be thinking about the future of Afghanistan.

“My hope for Afghanistan is my hope for any human,” he says. “To have peace and stability. To live a normal, peaceful life, that’s our hope for the Afghan people.”

*All names have been changed for the safety of the families

Muska Haseeb fled Afghanistan for Phoenix, AZ, with her family when she was just 12 years old. Today, with the IRC's support, she is an entrepreneur and is beginning pre-med classes.
Photo: Andrew Oberstadt/IRC

The IRC has resettled more than 16,000 Afghan SIV recipients since Congress established the program in 2006, and is committed to ensuring that these families are given a chance to seek safety and rebuild their lives. Our more than 20 offices across the United States are helping arriving Afghans with immediate needs such as housing, food and medical care, as well as long-term support.  Learn how you can get involved in your community.

The IRC began responding in Afghanistan in 1988, and now works with thousands of villages across nine provinces, with Afghans making up more than 99% of IRC staff in the country. We support displaced families with shelter, clean water and sanitation, and other necessities. We provide cash assistance and help people find livelihood opportunities. And we create safe learning spaces and offer community-based education, among other support.