What do people displaced by conflict really spend their cash on?

As this report from an independent aid watchdog recognises, cash relief can be a part of the answer to future challenges - when the traditional approach to aid is no longer effective.

Aid delivered as handouts of “stuff” such as food, blankets and shelter still accounts for the majority of humanitarian assistance. This traditional approach to aid is increasingly outdated and inadequately meets people’s needs.

Cash relief reaches the people who need it most, when they need it

That’s why the International Rescue Committee is prioritising cash relief in its humanitarian work, and with good reason: it is in many instances the most effective and efficient means of getting help to people who need it most quickly, and we can measure its impact. Cash relief offers people the chance and choice to buy what they need — and can be empowering for women who may otherwise be isolated and marginalised.

Take our work in Cameroon.

The refugee crisis is a global displacement crisis that goes far beyond Europe’s shores. Mayo Sava, an area in Cameroon’s Far North, saw particularly devastating change as a result of the destabilising presence of Boko Haram in the areas bordering Nigeria.

Major displacement in Mayo Sava was coupled with a collapse in the local services that communities rely on. Many of the over 45,000 people displaced within this area fled with little more than the clothes on their backs.

Their living conditions? Some have been extended a welcome by the kind families who’ve opened their homes to them. Many are sheltering in makeshift lean-tos made of salvaged materials. Others are sleeping out in the open. Eighty percent live below Cameroon’s national poverty line, whilst 38% are facing severe food insecurity.

Traditional aid is no longer sufficient

Each family has a unique set of needs. Traditional aid responses providing the same goods or services to all affected households are no longer support families with their basic necessities. That’s why we need to rethink our aid response.

We need better aid, not just more aid, with a focus on those who need the support most. The IRC is committed to delivering 25% of its humanitarian assistance through cash relief by 2020, up from 6% in 2015. And that’s why the IRC is providing digital cash relief in places like Cameroon to address the most urgent needs of the displaced and the families that are hosting them. 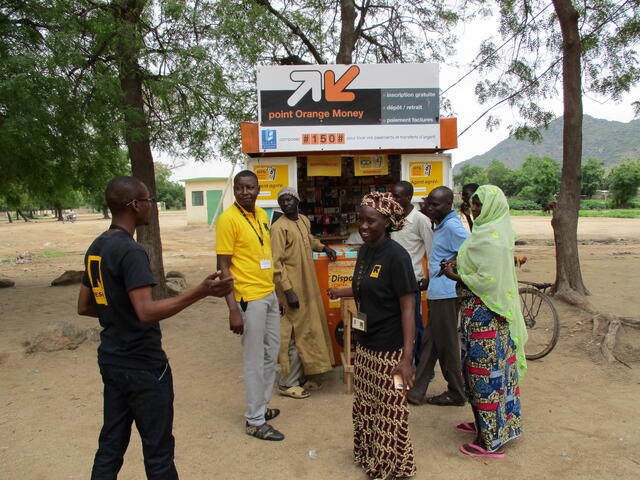 Mobile cash relief distributions in Cameroon allow people displaced by conflict to choose when and where to spend their cash.

Partnering with the mobile network Orange, from June to November 2016 the IRC provided digital cash relief to over 550 households, reaching just under 5000 people in conflict stricken communities. Taking advantage of Orange’s existing systems halved the time it took to deliver the relief compared to trucking in large quantities of bulky items to distribute, and the mobile money allowed recipients to choose when and where to spend their cash. This eliminated the need to travel to a distribution point on a specific date. They can also choose how much to withdraw at a time, providing them with greater flexibility and security.

The household members selected to receive cash relief are displaced, have very low income, live in an improvised home or with other families, include five or more children, or are led by a woman, elderly person or unemployed.

Take people like 51-year-old Fatimah, whose husband was killed in the conflict in northern Cameroon. She fled Amchidé, a locality bordering Nigeria in Mayo Sava with her four remaining children, all under 12 years old.

When we fled, we walked day and night. We spent a month wandering, sleeping at strangers’ houses and sometimes going days without eating. I had never before known suffering like that.

After a month, and a journey of over forty miles, she arrived in Tokomberé, where her niece lives with her husband. She faced a grim reality. “They and their neighbours tried to help us, but we would still spend days without eating. My children would go to other houses looking for a meal. Sometimes they were jeered at and chased away. It was humiliating.” 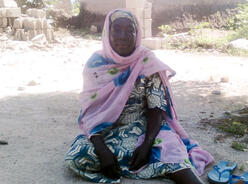 Fatimah was forced to take matters into her own hands. She started making and selling neem oil [a vegetable oil used in preparing cosmetics or traditional medicine,] sending her children to wander the neighbourhood selling it, as well to grow vegetables in a small field and a cabin built by her niece’s husband. In total, this brings in just $2.50 each week to support her family.

Cash relief proved a lifeline. Now her family can eat two to three meals a day.

“I was able to buy three sacks of sorghum [a grain], enough to last us several months. Even though our meals aren’t always the best quality, at least my children don’t go to bed hungry anymore.”

Providing choice, cash builds independence – and is used for much more than mealtimes.

Whilst food remains a vital priority for people displaced by conflict, just like any family they have a range of needs that include paying their rent and using the cash to kick-start a small enterprise that can help build their self-reliance.

“We can decide when and what to eat. Sometimes we even have fish or meat. We also bought clothes and sleeping mats, and I have already bought notebooks and uniforms so that my children can go to school.”

“To make money, I bought the ingredients to keep producing my neem oil.”

How cash relief is spent in Cameroon

Cash relief provides the choice people displaced by conflict need to take control of their lives. And, over time, the amount of households reporting food as their top expense began to mostly stable.

Those reporting rent or shelter as their top expense fell by about 50% after their first transfer of digital cash relief - out of up to four monthly transfers - as some chose to use their first transfer to make an investment for the future. Through paying several months’ rent in advance or making improvements to their improvised shelter, they prioritised other pressing day-to-day needs in subsequent months.

Cash relief isn’t a panacea for the world’s refugee crisis.

In war zones, traditional forms of emergency aid continue to play a crucial role in helping fleeing civilians. But cash relief is one of the best ways to help the millions of long-term refugees and internally displaced people with few prospects of returning home.

For Fatimah, cash provides that welcome relief she needs for the future.

“I have fewer nightmares now. I know that my husband is proud of us, and we pray for his soul to rest in peace.”

With financial support from SIDA, the International Rescue Committee (IRC) provides digital cash relief to help the most vulnerable households—in both displaced and host community families—in addressing their most urgent needs.