What is happening in Myanmar?

On 1st February 2021, military armed forces in Myanmar detained senior members of the civilian government after the Military Armed forces claimed the results of the November 2020 elections were fraudulent. Since then, mass protests and security force crackdowns have continued unabated. There is a heavy security force presence across the country.

Violence against peaceful protesters is escalating daily. Dozens have been killed and hundreds arrested throughout the country. Communications across Myanmar continue to be disrupted.

Clashes in the northeast of the country have escalated leading to increased levels of displacement. Any further clashes could result in an escalation of violence that leads to additional displacement. The threat of further economic breakdown may see communities left without support.

The crisis in Myanmar

A half-century of military control, extreme poverty and frequent natural disasters has left Myanmar in a state of crisis. The country hosts some of the most isolated and vulnerable populations in the world.

In 2011, Myanmar began the process of political, social and economic reform. This led to more freedoms, decreased oppression and increased foreign investment. Despite these gains, many people continue to require life saving support.

Myanmar has struggled to recover from the devastation of Cyclone Komen. The crisis displaced 1.7 million people in 2015. At the same time, 100,000 Muslims were forced to flee deadly persecution. They escaped by boat, but many tragically drowned at sea.

Nearly 1 million Rohingya have fled violence in Myanmar's Rakhine State to Cox’s Bazar, Bangladesh. The IRC is working in Cox’s Bazar to provide health care, protection for vulnerable women and children, and emergency support for the refugees.

Myanmar, located in Southeast Asia, has for decades been ruled by a military regime and pummeled by natural disasters.
Photo: Maruf Hassan/IRC

The IRC’s response in Myanmar

The IRC began work in Myanmar in 2008, providing humanitarian relief in response to Cyclone Nargis.

The IRC promotes economic recovery for farmers. We also operate women and girls’ centres that provide skills training and support to survivors of violence. The IRC aids nearly 140,000 refugees from Myanmar in nine camps along the Thailand border.

Events from the past two months have meant the IRC’s activities continue to be disrupted. This is due to movement restrictions and insecurity. Over 1 million people could be forced into a humanitarian disaster if aid is further restricted. 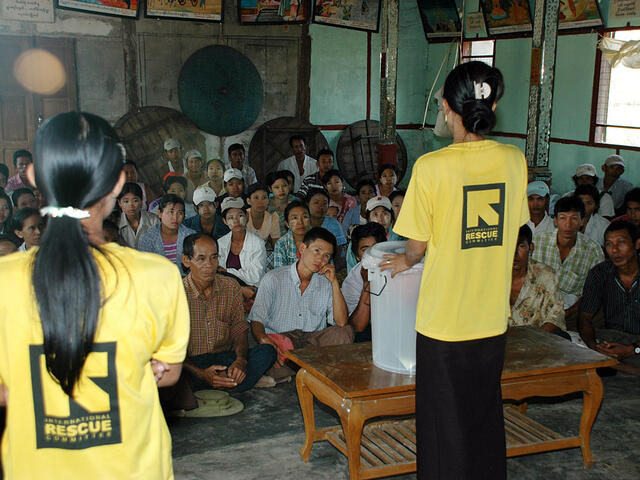 What must be done:

Find out more about Myanmar here.