Why is Gary Lineker being schooled by Jo Brand about fish and chips?

In our latest film, comedian Jo Brand as an animated battered fish and actor Yasmin Kadi as a peppy chip reveal to Match of the Day presenter Gary Lineker – and the nation – that we have refugees to thank for our beloved British dish.

Here's why they wanted to help shine a light on the little-known origins of the mighty fish and chips. 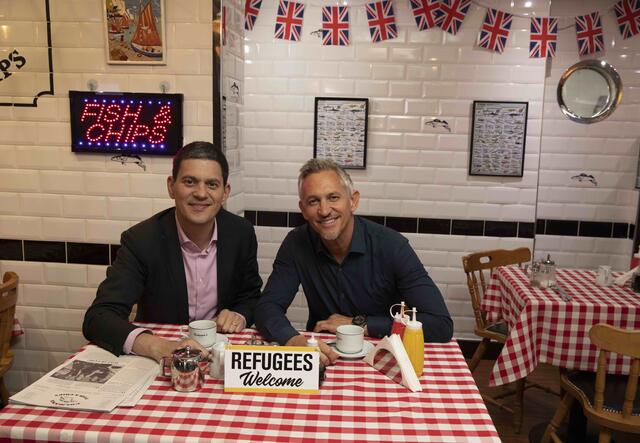 Match of the Day presenter Gary Lineker sits with IRC's CEO and President, David Miliband. He has been highlighting refugee contributions because "the story of fish and chips is just one example of the historic contribution that refugees have made to this country."
Photo: Geoff Love/IRC

Gary Lineker explains why he decided to take part: “Providing a new start to those who have fled their homes represents the best of Britain's values because we know refugees have always helped to keep our communities safe and make our society stronger.

“We've seen during the COVID crisis how refugees have been among those on the front lines of fighting the pandemic. That should come as no surprise. Refugees want to contribute to this country -- and they always have in ways that many people may not appreciate. The story of fish and chips is just one example of the historic contribution that refugees have made to this country. It is a contribution that should be celebrated. After all, Britain wouldn't be Britain without refugees.” 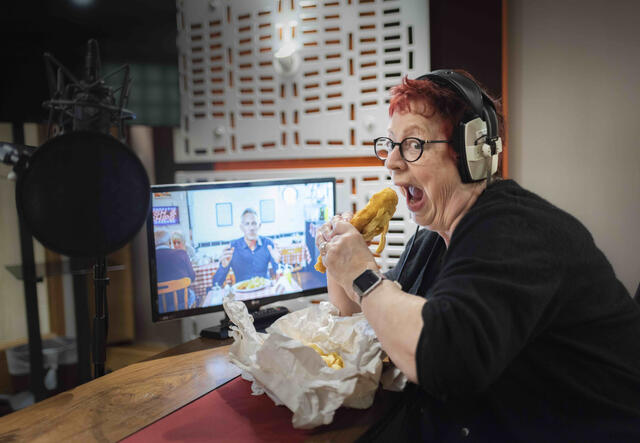 Comedian Jo Brand is happy to be on the right side of history - "or should I say fish-story" - when it comes to celebrating refugees.
Photo: IRC

Jo Brand says: “Now it will not come as a great galloping surprise that I love fish and chips as much as the next Brit. But what I learned is that when you delve into the history, you discover that we actually have refugees to thank for this much loved British dish.

“This isn’t just a fun bit of trivia. Fish and chips is just one example of the incredible contributions that refugees have made to the communities that welcome them. It has been inspiring to witness refugees – the NHS doctors, the mask-makers, the community volunteers – step up to help during the coronavirus pandemic.

“Yet, countries around the world are turning their back on refugees. Only a tiny percentage of refugees have been given the chance to rebuild their lives in safety. In the United States, the Trump administration has set refugee admission targets at a historic low. Closer to home, we are seeing countries across Europe closing their doors to refugees.

“So as I found myself rendered into a talking fish giving Gary Linekar a lesson on the origins of fish and chips. I’ve never been so happy to be on the right side of history. Or should I say, fish-story.” 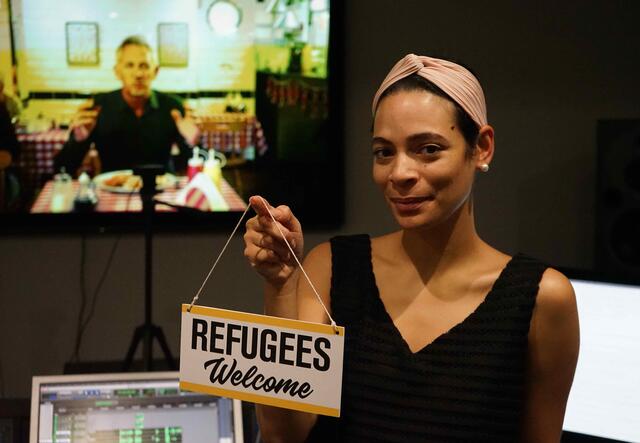 Singer and actor Yasmin Kadi has a deeply personal reason for wanting to be part of this film - she is a refugee herself.
Photo: IRC

For Yasmin Kadi, a singer, actor and refugee who voiced the chip, the reasons are personal. “I was 13 years old when the force of the civil war in Sierra Leone came to my front door. My parents, fearing for our family’s safety, made the difficult decision to flee to the UK. It wasn’t easy starting our lives over again, but something changed when I started performing. I made friends and people saw beyond the label ‘refugee.’ They saw me as a human being who had something to offer.

“Now, when I think of Britain at its best, I think of a country of compassion and tolerance. Providing a new start to those who have been forced to flee their homes doesn't just benefit the individual, but the communities they join. After all, refugees contribute to this country, and they always have. That's why I was so pleased to be part of this project. Hopefully people will find the film fun, but also see the message behind it. Fish & chips is just one example of the contribution refugees have made, but we could have picked so many others – from healthcare to the arts, business and volunteering.