The European refugee crisis: Key facts from new research with refugees in Turkey 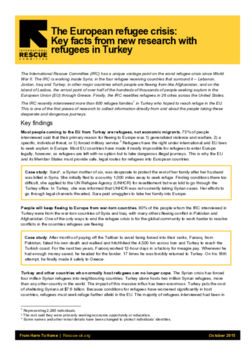 The International Rescue Committee (IRC) has a unique vantage point on the worst refugee crisis since World War II.

The IRC is working inside Syria; in the four refugee receiving countries that surround it – Lebanon, Jordan, Iraq and Turkey; in other major countries which people are fleeing from like Afghanistan; and on the island of Lesbos, the arrival point of over half of the hundreds of thousands of people seeking asylum in the European Union (EU) through Greece. Finally, the IRC resettles refugees in 26 cities across the United States.

The IRC recently interviewed more than 800 refugee families1 in Turkey who hoped to reach refuge in the EU.

This is one of the first pieces of research to collect information directly from and about the people taking these desperate and dangerous journeys.