Hague and Jolie, in her role as a United Nations refugee agency special envoy, met with IRC staff and displaced women at Nzulo camp near Goma, the capital of North Kivu province. The camp shelters more than 10,000 of the estimated 218,000 people who have been uprooted by armed conflict in the region over the past year.

Camps like Nzulo and other makeshift settlements are often not a safe refuge for women and girls, who risk attack as they collect firewood or water, try to find assistance to support themselves and their families, or walk around at night.

Protecting women and girls from violence is a core part of the IRC’s emergency response in eastern Congo. Here is a snapshot of our work:

The IRC provided life-saving care to more than 2,500 women and girls who have been raped or abused in the past year. 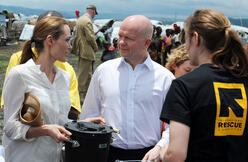 We distributed 12,000 emergency kits for women over the past few months to enable them to wash in private and to reduce the risk at night-time. The kits include extra clothing and underwear, strips of reusable cloth for sanitary towels, soap and two wash buckets, flashlights, as wellas whistles they can use to signal for help if there’s danger.

To reduce the amount of time women and girls spend collecting firewood, the IRC will begin distributing 2,500 fuel efficient stoves next month.

We are providing emergency delivery kits to visibly pregnant women to ensure they are able to deliver their babies safely even if they are unable to reach a health center.

“Women and girls have been on the frontline of the crisis in Congo for too long,” says Elinor Raikes, the IRC’s deputy regional director.

“The recent conflict has put them at even more risk from sexual and physical violence,” Raikes explains. “Violence against women and girls takes place in every conflict, which is why it is essential to prevent abuse in the first place and support survivors as they resume their role as leaders within their families and communities.”