Beyond ISIS: struggling to survive in eastern Anbar

'Where are we?’ I ask after waking up bleary eyed from a much-needed nap. ‘Fallujah,’ my colleague replied.

Another 6am start and another hot car journey had led us to the city 50km west of Baghdad. As with my first visit to Mosul it felt very surreal to suddenly be in a place that for so long only existed to me on news feeds.

Retaken from ISIS over a year ago destruction now sits alongside every day life. Houses pockmarked with bullet holes next to thriving businesses. Signs warn of the dangers of mines and booby traps — one includes a picture of a teddy bear. People rush past. The legacy ISIS left behind is a constant undertone, continuing to shape people’s day-to-day lives.

We cross the Euphrates — one of the great rivers of Iraq. Like ISIS, this river sees no geographical borders — upstream in the Syrian city of Raqqa ISIS remains in control, and the battle to retake it rages around the water. Many people fleeing rely on the river to make their escape. They load what little possessions they’ve managed to salvage into small fishing boats alongside their parents and children, hoping to evade capture, air strikes and snipers.

Crossing the Euphrates - sign warns of unexploded mines & booby traps. The area has been clear of ISIS for a year but kids still in danger. pic.twitter.com/BK8HZrrpRC

We continue on. The landscape here in Anbar is very different from the one I see day-to-day in northern Iraq. Gone are the mountains and the rolling fields of wheat. In eastern Anbar all is flat. Forests of palm trees are laden with ripening dates. The soil is a dusty yellow. It’s late July and there isn’t a cloud in the sky. Temperatures hover around 50 degrees.

A lame donkey struggles past our car. Two boys push bicycles along the potholed road past remnants of a car — likely destroyed by fighting. A few meters down the road the overturned turret of a tank sits next to a barricade of soil. That this was once a battlefield is obvious. These barricades run across the roads too — and although now passable they still keep the traffic speed in check.

Passing checkpoint after checkpoint after checkpoint, we drive through a village with a high level of destruction — almost all the houses have been damaged by bombs and air strikes. My colleague tells me that only a few families remain — everyone else has fled and has still not returned despite the fact the village was retaken over a year ago. Like elsewhere in Iraq people still do not feel safe. Many families whose houses were destroyed are unable to afford to rebuild — and so remain stuck in limbo in camps.

The further we drive into Anbar the closer to a desert the landscape looks. Between towns there is nothing. The odd flattened house. A lonely tree. A deep trench. It’s easy to imagine how this landscape could be quickly overrun by ISIS.

The next village has a lot more life. We pass a common sight in Iraq — a row of workshops surrounded by tyres wrapped in metallic pink, blue, green. On the roof old car parts sit in the blistering sun. One shop is crowned by a whole rusted SUV — complete with bullet holes. I’m not sure what the message is meant to be for customers. 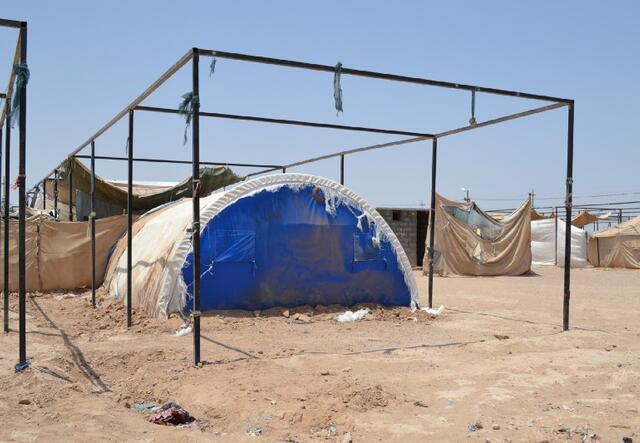 A tent in Amiriyat Fallujah camp. The frame is missing shading. The ground is dusty and uneven.
Photo: Jess Wanless / IRC

Today we are travelling to the camps near Amiriyat Fallujah. People here have been displaced for many months — most I met fled a district of Fallujah well over a year ago. They told me how their houses had been damaged and how their husbands had been killed. Without support and with nowhere to go the chances of being able to leave the camp and restart their lives anytime soon is slim.

The tents are weather worn. Stuck in the middle of the desert and lacking enough power for air coolers the heat is oppressive. A number of the water tanks have run dry as they wait to be refilled. Without the funding required to make the camp safe, the toilets are far from many tents, missing locks and unseparated between genders. The spaces for children and medical centres are far from homes meaning that many people can’t use them.

In two of the sections of the camp the International Rescue Committee runs women’s listening centres. Here women and girls gather to spend time together, taking part in activities and talking about the challenges they face. Without this space many wouldn’t have a chance to socialise with other women. 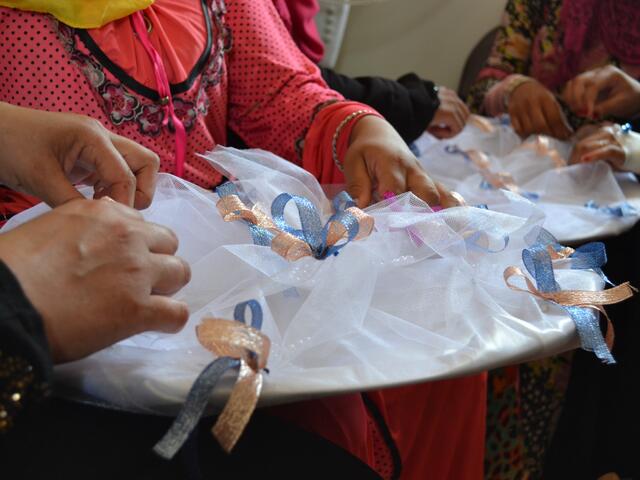 This morning women are making wedding decorations and doing each others make up. I ask the group: ‘Who is best at make up?’ One woman says: ‘I used to be — but it’s such a long time since I did it, I feel like I’ve forgotten how.’

Although these activities might seem trivial and fun, they help women to rebuild their identities and confidence after years living under ISIS, followed by many difficult months struggling to survive in the camp.

Despite their experiences the women are incredibly strong willed — ‘I want to send my daughter to school’; ‘I want to learn how to read and write my name’; ‘I want to work,’ they say.

They talk to me about the friendships they have built in the centre. Their bonds are obvious. As they tell me about the challenges they face many cry. They comfort each other the way only true friends can. Being able to share their problems not only helps lessen their own burden but also ensures that they don’t feel alone — they are not the only ones facing such hardship.

While NGOs are flocking to Mosul these families left behind after previous battles for Fallujah and Ramadi are still in need. Further west in Anbar thousands of families are still trapped under ISIS control. Their journey to safety has not yet begun. 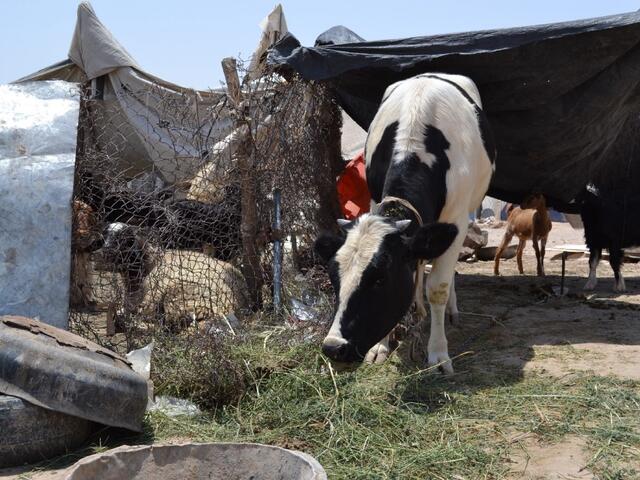 Many of the areas inside Amiriyat Fallujah camps are unfenced and unmanaged. In one camp sheep and goats are kept — which although providing resources for the displaced also present health issues.
Photo: Jess Wanless / IRC

Across Iraq over 2 million people have returned to their neighbourhoods since April 2015, including 1 million in Anbar. Returning home does not mean finding safety. Families around the country are struggling to access the support and services they need to survive, recover and gain control of their futures. Although in cities like Fallujah and Ramadi water and power supplies are slowly being restored, unexploded mines, damaged homes and lack of security continue to disrupt people’s lives.

Still — over 110,000 people from Anbar are currently displaced. As months pass many are no closer to being able to regain the life that they once lived, stuck in camps and unfinished buildings and far from their homes. Anbar provides a stark lesson for Mosul and other recently retaken places in Iraq. The reality in Anbar today demonstrates that long after ISIS are expelled from an area, support and funding is needed for months, if not years, before returnees can properly restart their lives.

This article was originally published on Medium.