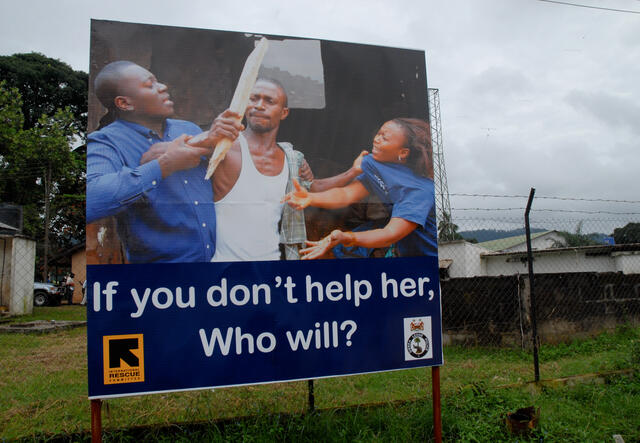 Women in post-conflict West Africa continue to suffer violence at alarming levels and with shocking frequency, but the primary threat to their safety is not strangers or men with guns; it’s their husbands, according to the International Rescue Committee.

In a report published today, “Let Me Not Die Before My Time: Domestic Violence in West Africa,” the IRC describes domestic violence in Ivory Coast, Liberia and Sierra Leone as an acute and pervasive problem that endangers, isolates and disenfranchises countless women and hinders recovery and development in their communities.

The report notes progress in bringing attention to atrocities against women in wartime and raising funds for programs that aid survivors of conflict-related rape. But the IRC asserts that domestic violence, which is often exacerbated during and after war, has not been recognised as a “humanitarian” issue by the international aid community, despite its devastating impact on women in countries emerging from crisis.

“Domestic violence is often considered a private matter, minimised as a cultural practice or seen as an issue that can be addressed only after peace and development  take hold,” says IRC President George Rupp, who led the IRC’s Commission on Domestic Violence on a recent research trip to Liberia and Sierra Leone. “It is time to recognise domestic violence for what it is – a public health crisis that requires urgent attention and resources in humanitarian settings.”

The Most Common Form of Violence

IRC statistics from more than a decade of programming in the region indicate that 63% of women victims of violence who come to the IRC for assistance report attacks and abuse at the hands of their partners or spouses.  Nearly 70% of these survivors have suffered violence by the same partner at least once before and 53% have required medical attention.

The report also cites research in Ivory Coast that found women at a heightened risk of domestic violence during and after armed conflict.  A 2008 survey in a violence-ridden district found that one in four women interviewed had been the victim of domestic violence during that volatile year and 47% in their lifetime. In the first six months of 2011, amid a wave of post-election violence, the IRC documented a 43% spike in reported incidences of partner abuse by women seeking IRC-supported services, compared to the previous six-month period.

Domestic violence also takes many forms, with physical assault the most common type of abuse reported to the IRC.  The report cites accounts of beatings, marital rape, stabbings and burnings, including one woman who was locked in her home by her spouse as he set their house on fire.  The report describes other less visible, but still insidious forms of abuse like the denial of food, medical care and money for basic necessities, as well as forced isolation, restricted access to friends and relatives, humiliation and threats of violence.

“Men in West Africa largely control household resources, including income earned by their wives,” says Heidi Lehmann, who directs the IRC’s global women’s protection and empowerment programmes. “In abusive homes, requests for food and money are frequently met with violence.”

The report includes the story of a Liberian woman whose husband attacked her with a machete, striking her head and chopping off her fingers. Her husband was jailed, but soon freed after his uncle bribed police. The case was never investigated. Today, the woman lives in constant fear of her husband, who punishes the family by denying them money for food and medicine. She came to the IRC for care and support – which makes her unusual among domestic violence survivors who often stay silent.

While domestic violence is underreported everywhere, women in West Africa have even fewer incentives to disclose attacks or seek help.

Sierra Leone passed a law in 2007 criminalising domestic violence and establishing basic rights for women in the home, but provisions of the law are hardly known or implemented by local law enforcement. Liberia and Ivory Coast have yet to pass targeted legislation on domestic violence, giving survivors virtually no legal recourse. In all three countries, police lack training to handle domestic violence cases. When arrests are made, cases are rarely heard and perpetrators go free.

In these countries, the IRC has expanded its services to address the needs of domestic violence survivors. Programmes include medical assistance, counseling, legal aid, safety and prevention measures and training for women’s and men’s groups to offer aid and raise public awareness.  But the needs are vast and resources are thin.

“There’s an extreme scarcity of needed services for survivors,” says Lehmann. “Add that to abusive partners living under the same roof, justice systems that don’t take cases seriously and communities that tolerate domestic violence and it’s understandable that women feel trapped and unable to escape.”

Stigma, shame and fear also prevent women from speaking out, even to friends and family – effectively isolating them from the only support they have. This isolation, the report emphasises, also inhibits women from participating in the social and economic life of their communities and prevents them from taking advantage of opportunities that peace presents.
“It is a well-established fact that investing in women is an effective strategy to achieve healthier and more stable communities in countries rebuilding from war,” says George Rupp. “If international donors are committed to meaningful recovery in these countries, then they must include domestic violence in their humanitarian strategies and funding.  Every one of us should be allowed to feel safe in our own home, which is why the IRC deems addressing domestic violence a core humanitarian responsibility.”

The IRC urges donor institutions and governments to recognise domestic violence as a serious humanitarian problem, develop strategies to address the issue in conflict and post-conflict settings and increase funding for programs that address all forms of violence against women, including targeted initiatives to prevent and respond to domestic violence and aid and empower survivors.

The IRC urges the humanitarian aid community to develop programs that are tailored to the specific health, psychosocial, safety and justice needs of women suffering from partner abuse and violence and to establish targeted strategies to prevent abuse from happening in the home.
The IRC urges the governments of Liberia and Ivory Coast to pass domestic violence laws and commit resources to implementing them, while pressing the government of Sierra Leone to enforce its domestic violence law and ensure that police, local authorities and traditional leaders understand its provisions. The IRC urges all three governments to develop policies and fund programs that address the health, legal, psychosocial, protection and economic needs of domestic violence survivors and to engage civil society in informing and implementing programs that aid, protect and economically empower women.

About the International Rescue Committee: A global leader in humanitarian assistance since 1933, the International Rescue Committee works in more than 40 countries offering help and hope to refugees and others uprooted by disaster, conflict and oppression. During crises, IRC teams provide health care, shelter, clean water, sanitation, learning programmes for children and special aid for women. As emergencies subside, the IRC stays to revive livelihoods and help shattered communities recover and rebuild. A tireless advocate for the most vulnerable, the IRC is committed to restoring hope, dignity and opportunity.