Here's how the IRC is helping Syrian children and their families recover from war and trauma. 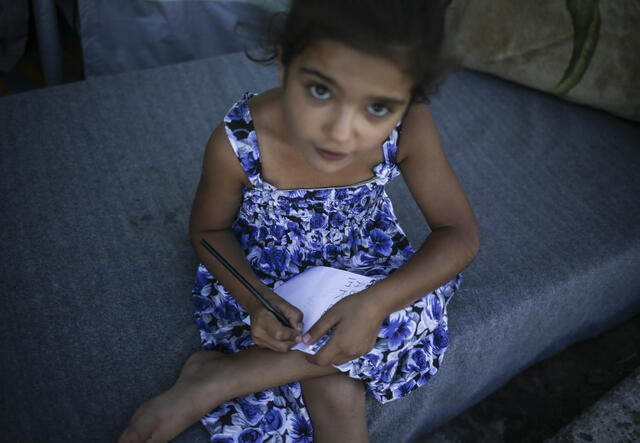 7-year-old Silva writes in her notebook while sitting outside her family's tent in the Alexandria refugee camp.
Photo: Tara Todras-Whitehill for the IRC

Millions of children are caught in the crossfire of more than five years of civil war in Syria. Millions more have fled to safety in neighbouring countries and Europe, but face an uncertain future.

The International Rescue Committee is working on all fronts of the crisis to provide children and their families with lifesaving health care and emergency aid, help coping with the trauma of war and the loss of loved ones, and educational opportunities that enable them to create a brighter future. 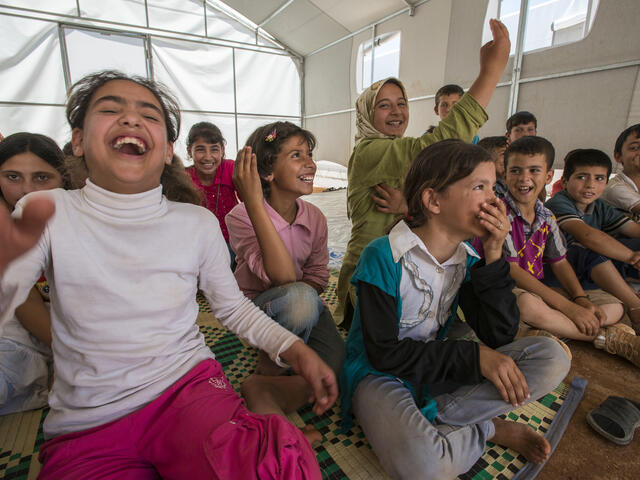 Children in a makeshift school at the Karameh displacement camp in Idlib, Syria.
Photo: Peter Biro/IRC

Syrian schools have been damaged and destroyed in the fighting, interrupting the education of 2.7 million children. The IRC is running classes and providing other educational support to thousands of children in camps and communities in Syria.

The IRC provides lifesaving support to over 700,000 children trapped by violence inside Syria, pairing health care and emergency cash for families with counselling and safe spaces where kids can play and learn to heal. 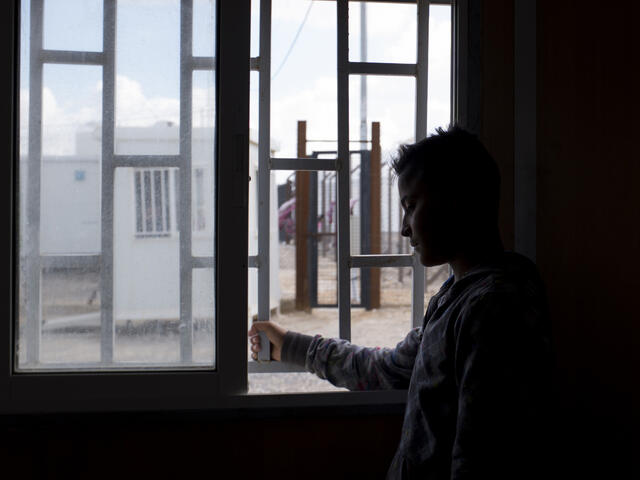 Fifteen-year-old Samir* has been waiting for four months in Jordan’s Azraq refugee camp to be reunited with his family.
Photo: Kaity Kawar/IRC

More than 3,000 Syrian children have crossed into neighbouring Jordan on their own since 2012. A team of 64 IRC aid workers at the Azraq and Zaatari refugee camps welcome and care for unaccompanied and separated children, try to locate their relatives and, if necessary, identify potential foster parents. 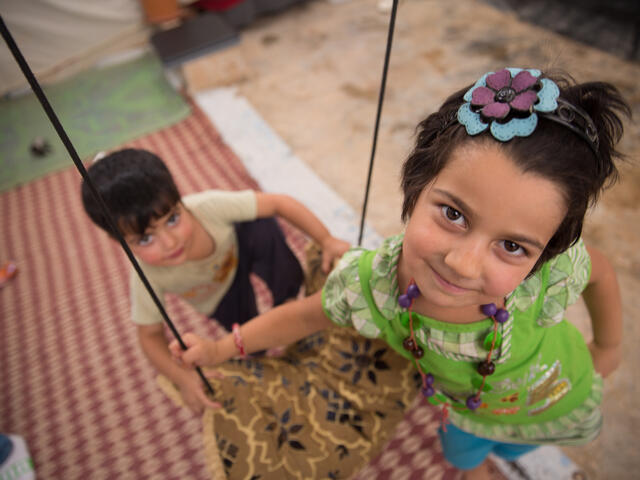 Syrian children play outside of their makeshift home in Jordan.
Photo: Meredith Hutchison/IRC

In Jordan, problems such as high unemployment rates is being made worse by the ongoing refugee crisis. Syrian refugees struggle to earn a living, keep their children in school, and get adequate food and health care. The IRC is reaching children and families with critical aid. 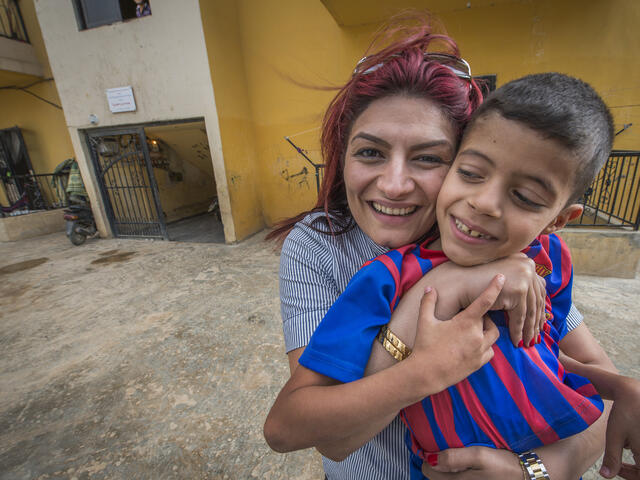 Roushan Khalaf with a refugee child in Bebnine, Lebanon. A refugee herself, Roushan now works with the IRC to help her fellow refugees get back on their feet.
Photo: Peter Biro/IRC

Lebanon has no formal refugee camps, and Syrians often struggle to find aid. More than 200,000 Syrian children in Lebanon do not attend school - and far too many work on the streets to help their families make ends meet. The IRC is providing support that includes creative learning and therapeutic activities to help prepare children under five to attend school. 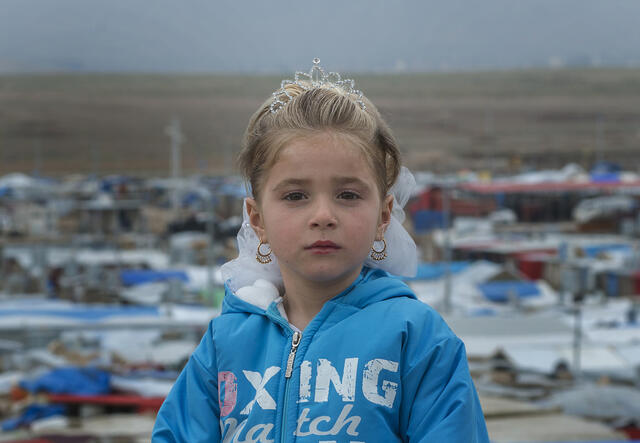 Syrian refugees who have lived for years in camps inside Iraq face dwindling services and support amid ongoing conflict and economic chaos in their host country. The IRC supports extra classes and specialised teacher training in overtaxed schools to ensure Iraqi and Syrian children have access to quality education. We also provide art therapy and other creative healing activities for children traumatised by conflict. 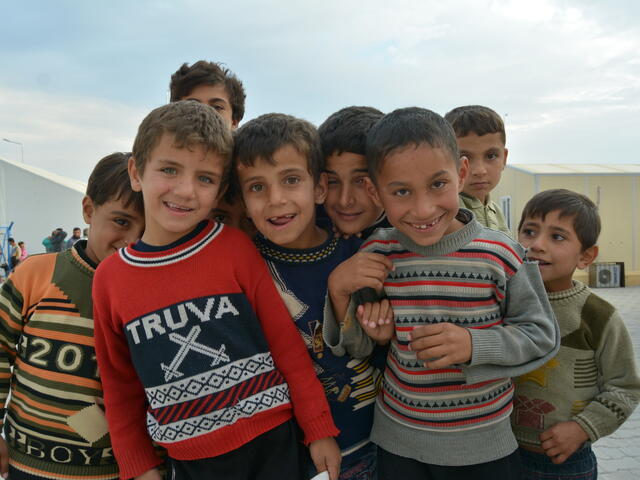 Children at a camp near Turkey’s border with Syria.
Photo: Ned Colt/IRC

In Turkey, which hosts more uprooted Syrians than any other nation, a lack of economic opportunities has led to increased child labour in refugee communities. Most Syrian refugee children in Turkey don’t attend school, in the Turkish town of Reyhanli so the IRC is providing education and special services to help kids catch up to their age-appropriate level. 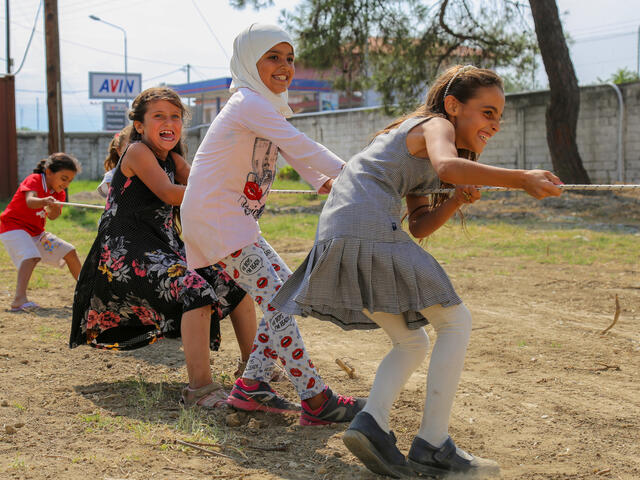 The IRC has opened three safe learning and healing spaces for refugee children in northern Greece, offering them the opportunity to recover emotionally through play and learning. The IRC is also providing psychosocial and other emergency support to children under the age of 18 who have been traveling alone and are living life in limbo since the implementation of the EU-Turkey deal in March. 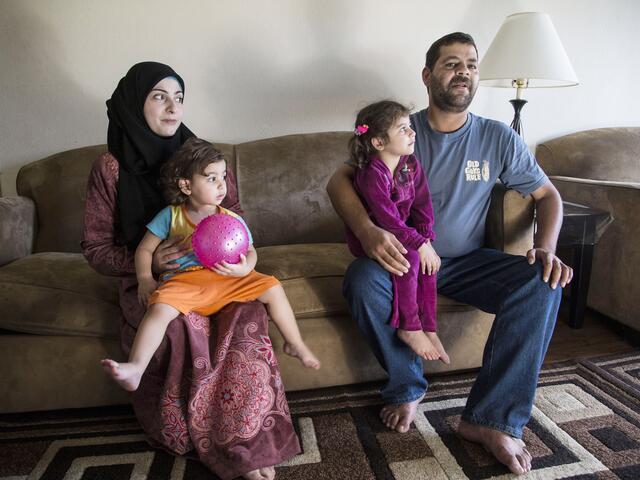 Rimeh Hamsah and her husband Maher with their two young daughters are among the first Syrian refugees to be resettled in the United States.
Photo: Nick Oza/The Arizona Republic Newspaper

IRC caseworkers and volunteers welcome Syrian families who have been granted refuge by the United States at the airport and make sure they have everything they need to rebuild their lives in a new country. That includes helping children enroll in school. 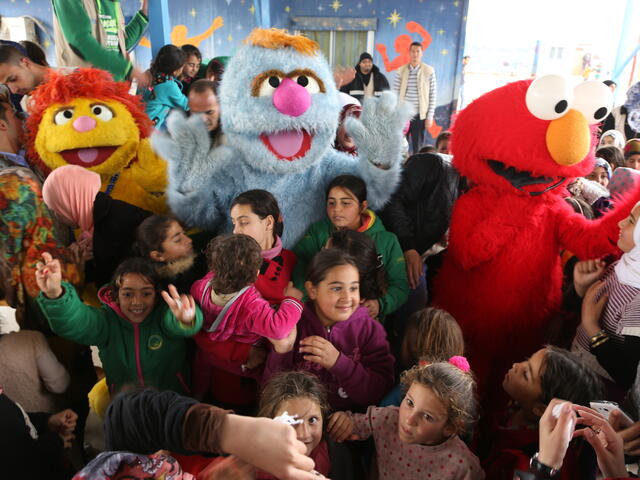 More families are uprooted today by conflict than during any time since World War II. The IRC and Sesame Workshop are working together to develop engaging educational content starring the lovable Muppets that can reach children in refugee camps like this one in Jordan - or wherever they are living - through TV, radio, mobile phones and other channels.

You can help us aid Syrians fleeing from war and conflict by donating to the IRC’s emergency response. Donate now to support children and families caught in this unprecedented crisis. Read about more ways to help refugees.