How cash is helping families recover from ISIS

For over two years many of Mosul’s 1.5 million residents lived under ISIS’s harsh regime without an income. Government salaries were suspended. Salons, pool halls and countless other small businesses were banned. As the months passed, families were forced to rely on their savings and sell their possessions to buy even basic supplies.

In late February supply routes were cut to west Mosul where hundreds of thousands of people are still living under ISIS control. Food prices skyrocketed putting the little that is available out of reach for many.

“We were living on bread and tomato paste for four months,” reports 30-year old Iqbal Salih Ahmed. “Before ISIS came I was a housewife and my husband was a manual laborer but after ISIS came the situation got much worse and he only could only get casual work meaning we had less money.” 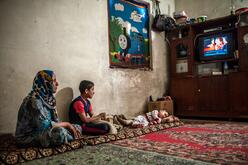 Thousands continue to flee every day and many camps are now full. Like a third of Mosul's displaced, Iqbal’s family aren’t living in a camp as there was no tent available for them. Instead they found refuge in a relative's house in Hammam al-Alil town.
Photo: Aurelie Marrier d&#039;Unienville for the IRC

Iqbal and her family are seven of the almost 700,000 people displaced by the battle for Mosul. Thousands continue to flee every day and many camps are now full. Like a third of Mosul's displaced, Iqbal’s family aren’t living in a camp as there was no tent available for them. Instead they found refuge in a relative's house in Hammam al-Alil town.

Hammam al-Alil lies just 14 miles south of the now infamous al-Nuri mosque, Mosul where al-Baghdadi declared the caliphate in 2014. Life here is no easier than in the retaken areas of the city. Once famous for its hot springs, many of the town’s residents were bussed into Mosul to act as human shields for ISIS.

In early November the town was retaken by the Iraqi army. Shops and markets are starting to reopen. The streets are beginning to bustle with children making their way to school. But many families are still struggling to get back on their feet and are not able to afford the basics.

“Cash is more important than anything else because money allows us to buy whatever we need, whether it’s food or paying rent,” explains Iqbal.

“Cash is more important than anything else because money allows us to buy whatever we need, whether it’s food or paying rent,” explains Iqbal. 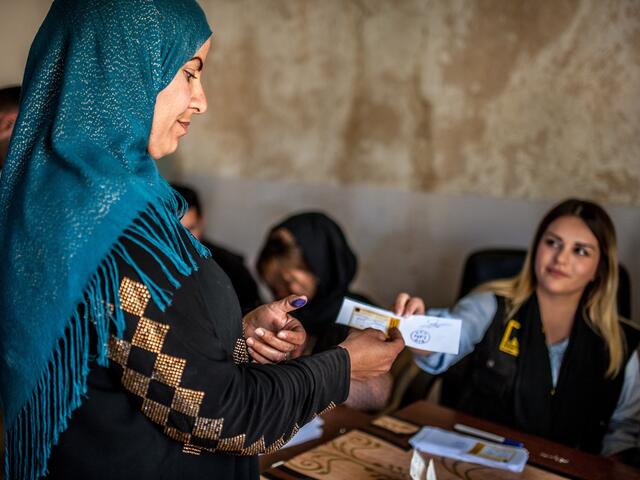 The IRC provides cash relief for families in Hamman al-Alil through programmes funded by ECHO.
Photo: Aurelie Marrier d&#039;Unienville for the IRC

Along with Iqbal over 850 families received vital cash relief in Hammam al-Alil from the IRC. “It is really a nice feeling to see my kids eating healthy food again. It’s much better than only eating bread,” says Iqbal.

When they were forced to flee their home by ISIS Iqbal and her family left everything they owned behind. “IRC helped us a lot. They helped us buy the things that we couldn’t even dream for in Mosul. We bought blankets and clothes for my kids.”

In coming weeks the IRC will distribute cash to vulnerable families in retaken areas of east Mosul, where the majority of people in 89 per cent of recently assessed areas were found to be reliant on credit to buy food.

“In the future we want to take our eldest son to the doctor to check his eyesight. He has had sight problems since birth but we didn't know until he was in school. When his glasses broke we couldn't afford to buy him new ones. I hope I will have enough money to take my son to a better doctor or take him abroad for treatment.” 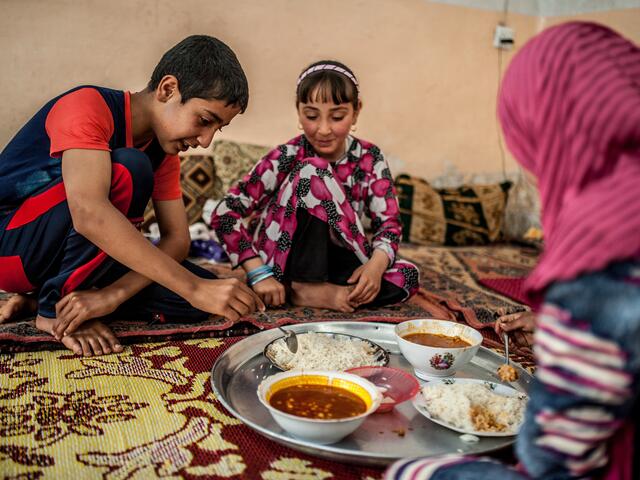 With the help of cash relief programmes, families have the power to decide how to spend their money effectively.
Photo: Aurelie Marrier d&#039;Unienville for the IRC

Cash relief is vital for families struggling to meet their immediate needs. But the long term future remains difficult for families like Iqbal’s, who want get back into work, see businesses reopen and for Government salaries to flow again. All of which are needed for the people of Mosul to look ahead to the future.