After fleeing war-torn Syria, Mohammad’s young family discovered the healing power of play with the help of the IRC and Sesame Street.

Mohammad, Hasina and their four young children left Syria at 3:30am in 2016. They were hiding in the bottom level of a truck and could hear the sounds of sheep bleating on the floor above them.

“We were very scared, at any time ISIS could have caught us,” Mohammad explained. “If they did, they would have hit the driver and taken the car. There are many people that have been killed trying to escape Syria.”

Mohammad and Hasina’s youngest child, Rayan, was just 45 days old when her parents were forced to escape in the the back of a truck on its way to Jordan. Their three other children, Ali, Reem and Hiba, were all below the age of 7 at the time. “My children were too young to understand what was happening – we were escaping from death, we didn’t explain, we just moved,” Mohammad says. 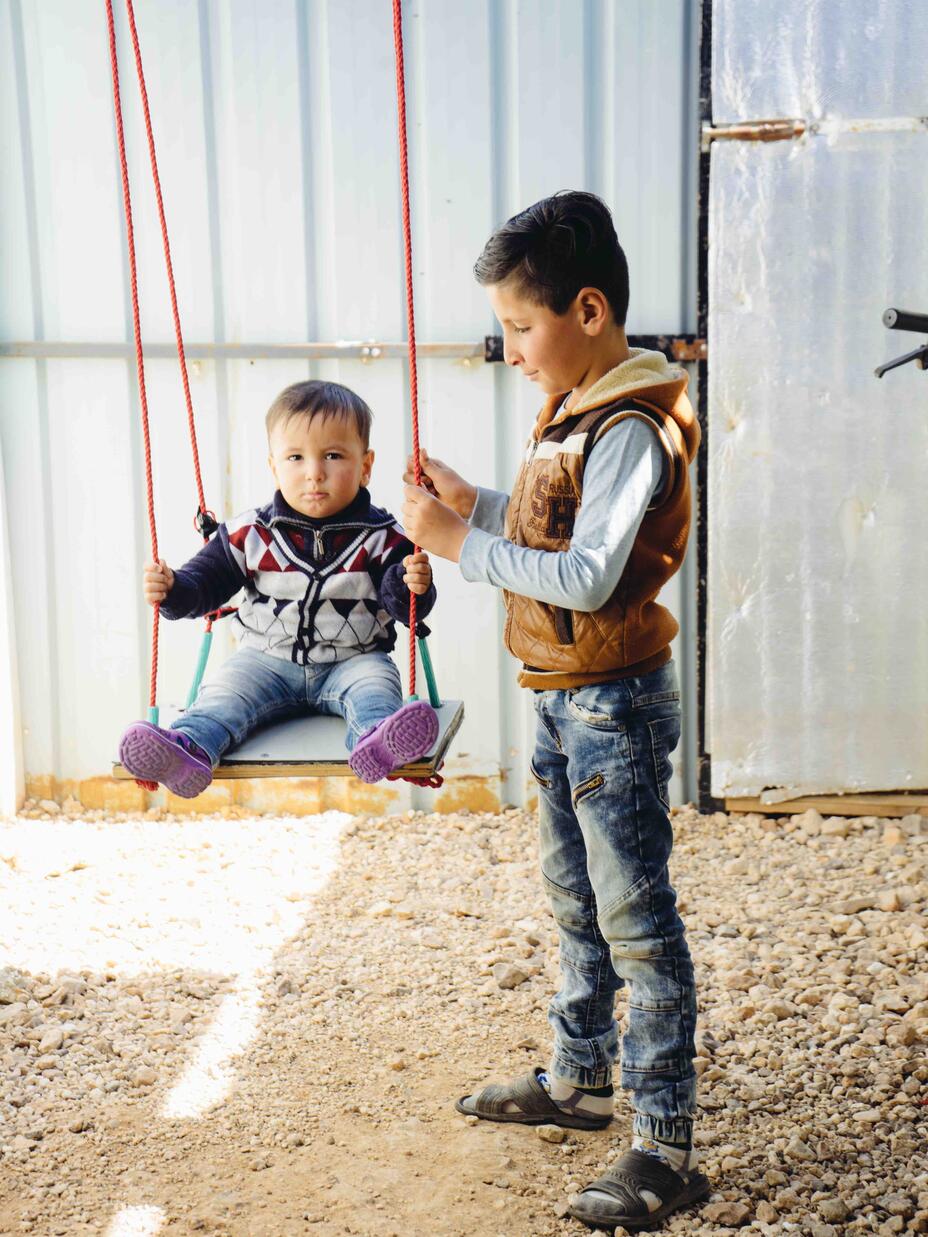 Nine-year-old Ali pushes his youngest brother on the make-shift swing outside their home in the camp.
Photo: AJarery/IRC

When the family first arrived in Jordan they had to stay on the border in Rukban, an informal camp with limited access to services. “Rukban was like dying,” Hasina says.

The family moved to Azraq camp, an hour’s drive outside of Amman. Miles of desert surround Azraq, where thousands of white metal containers with pointed rooves sit neatly next to each other. Each container houses families like Mohammad’s, many of whom have been living a life in limbo there for years, unsure of what their future holds. 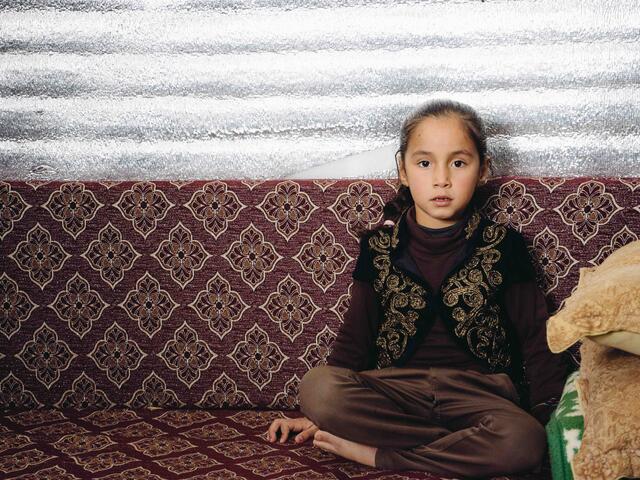 The mental effects of living in war-torn Syria had an enormous effect on Reem and she isolated herself for a long time before receiving support.
Photo: AJarery/IRC

Living here, the mental effects of living in war-torn Syria started to surface. “One day, when we were living in the camp in Jordan, military planes went over us in the sky. Reem got scared. From that time, she didn’t want to talk to anyone, she wanted to eat on her own, play with her toys on her own and be by herself.”

In Azraq refugee camp the International Rescue Committee runs Ahlan Simsim, an early childhood development program that is part of a larger partnership with Sesame Workshop, the non-profit behind Sesame Street. The name means Welcome Sesame in Arabic, and the program helps children recover from trauma and deal with stress. Play is a huge part of the recovery and for Hasina and Mohammad’s children, it’s been vital. “Play is like medicine for my children. For most children, it’s fun to play – but for my children, it’s a need.” 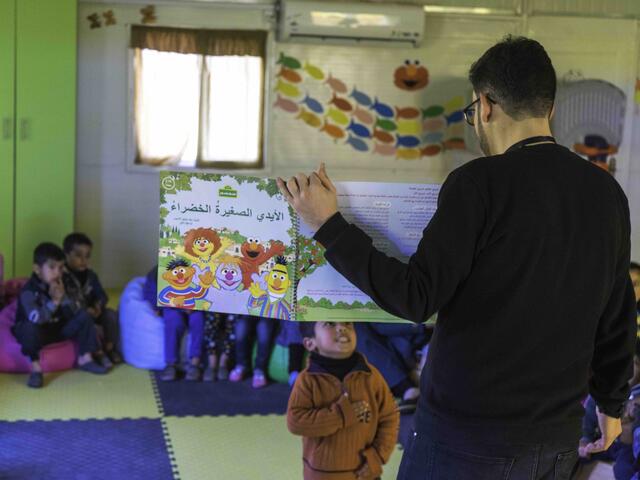 Ahlan Simsim sessions run weekly at Azraq camp and give children the chance to be children again.
Photo: AJarery/IRC

Reem, Hiba and Rayan have all benefited from Ahlan Simsim. “At the beginning they were shy and wouldn’t talk to anyone,” Radia, a volunteer at the centre explains. “Reem used to put her chair next to the door and wait there alone. It took a month, but they started to interact with children.”

Today they clap along to songs, shout answers to teachers’ questions and play with other children.

“When Reem came back from the centre she started saying, ‘Hey mum, I have a new friend,’” Hasina says.

Reem, who is now six, has since enrolled in primary school in the camp. Hiba, who’s 5 years old, and Rayan, who’s 3 years old, regularly go to the sessions. 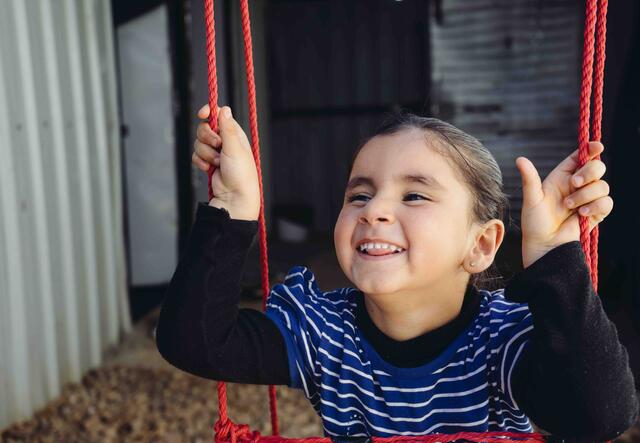 Five-year-old Hiba is full of energy and laughter, tragically her parents told us that she has a brain tumour.
Photo: AJarery/IRC

Hiba exudes confidence and happiness, breaking into giggles and beaming as she’s pushed in the make-shift swing outside. Meeting her, you would have no idea of what she’s been through. “Two years ago, we found out Hiba had a brain tumour. She can sleep for 24 hours continually and she’s got early onset periods, problems with sunlight and nose bleeds. There are no treatments for her in the camp, she’s been referred but it takes time. It took 1 year and 11 months to have the scan.”

The devastating reality of Hiba’s condition looms over the family as they struggle to get treatment for their daughter. Mohammad is desperately trying to make ends meet but it’s incredibly difficult. “I had to sell everything I owned. We spent all our money getting here and paying for food – we now have to borrow money and we’re in over £3,400 worth of debt. I’m stuck inside this camp and I cannot find work.” 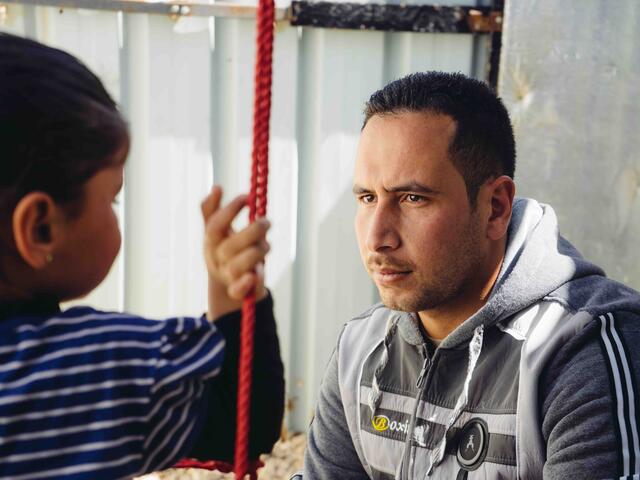 Mohammad is unable to work since fleeing Syria - but desperate to support his family.
Photo: AJarery/IRC

“Maybe it will take time, but we hope we can return back to Syria, start a new life in our house and start a business,” Mohammad says. But for now, he’s focused on keeping his children positive and going to the centre is an important part of their life in the camp. “Ahlan Simsim is like a doctor for my children.”

The IRC in Jordan

The IRC has been operating in Jordan since 2007 supporting refugees and the host community, find out more about our work on the ground.