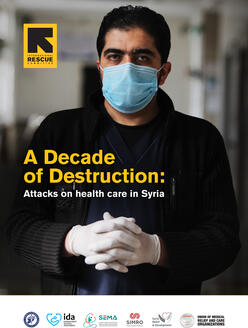 As the world marks 10 years of conflict in Syria, a new report from the International Rescue Committee (IRC) and its Syrian partner organizations Independent Doctors Association (IDA), the Syrian American Medical Society (SAMS), the Syrian Expatriates Medical Association (SEMA), Sustainable International Medical Relief Organization (SIMRO), Syria Relief and Development (SRD) and the Union of Medical Care and Relief Organization (UOSSM) reveals the widespread and devastating impact that a decade of systematic attacks on health facilities has had on Syrian civilians, and the crippling effect the decimation of the country’s health care system has had on its ability to respond to the COVID-19 pandemic.

“A Decade of Destruction: Attacks on Health Care in Syria,” highlights with chilling detail how this 10-year war strategy has turned hospitals from safe havens into no-go zones where Syrian civilians now fear for their lives.

Almost 60% of the 237 people surveyed by the IRC and its partner organisations had been directly impacted by an attack on health care over the past 10 years. Additionally:

Surveys conducted with health care workers also illustrate the extreme risks taken to maintain the provision of life-saving care, with 68% having been inside a health facility when it was attacked and 81% saying that a coworker or patient was injured or killed as a result of an attack.

This deliberate targeting of health care has left many health workers fearing for their lives and the lives of their families. An estimated 70% of the workforce has left the country, leaving just one Syrian doctor for every 10,000 civilians. On top of this, more than one in six health workers report working at least 80 hours a week to try and make up this shortfall.

The data also demonstrates the sheer scale of psychological suffering inflicted on health care workers and civilians by the regular attacks. 67% of the 237 people surveyed report that their wellbeing had been negatively impacted, while among the 74 health workers surveyed, this figure was 74%.

Despite health facilities and health workers being protected under international humanitarian law, Physicians for Human Rights have documented 595 attacks on health care in Syria since 2011, and the IRC has documented at least 24 attacks on its programming in northwest Syria in just the past 2 years alone. As a result, more than half of Syria’s hospitals are not fully functioning and these attacks have left the country woefully unprepared to support the 12 million Syrians now in need of health assistance - let alone to deal with the effects of a pandemic that has crippled even the world’s strongest health systems.

Reductions in cross-border humanitarian access - resulting from the failure of the UN Security Council to renew the only humanitarian resolution passed during the 10 years of the Syrian conflict - have further hampered the response, leaving health workers also facing the desperate challenge of operating with reduced supplies and equipment.