Where’s the Money? How the Humanitarian System is Failing to Fund an End of Violence Against Women and Girls 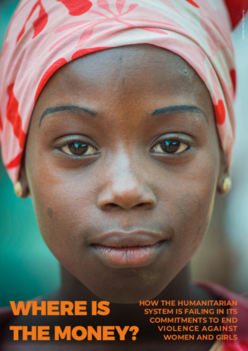 Report: Where’s the Money? How the Humanitarian System is Failing to Fund an End of Violence Against Women and Girls

Violence against women and girls is a global problem of epidemic proportions. Evidence shows that over one-third of women and girls globally will experience some form of violence in their lifetime. Regardless of where they live, their religion or culture, or what stage of life they are in, each is a target of violence specifically because of her gender and the gender discrimination that persists globally.

Gender-based violence (GBV) is exacerbated in emergencies, where vulnerability and risks are higher, and family and community protections have often broken down. Rohingya women arriving in Cox’s Bazar have reported rape at the hands of the Myanmar military, while in the refugee settlements, women and girls are often not allowed to leave their tents, isolating them from services and increasing their risks of violence from partners and family. In South Sudan, as many as 65 per cent of women and girls have experienced physical or sexual violence. Sexual exploitation of women and girls in emergencies – including by aid workers and peacekeepers – is also increasingly recognised as a problem that the humanitarian sector must address.