Albert Einstein and the birth of the International Rescue Committee

In January 1933, Adolf Hitler, the head of the Nazi party, became chancellor of Germany. Within two months, the Nazis had gained virtually total control of the country and had begun what would be a 12-year nightmare eventually engulfing the entire world.

With Hitler's rise to power, Germany's labour unions and opposing political parties were banned. Civil liberties were suspended. And the purging of Jews from the German government and universities was launched. Although much of the world greeted the Nazi takeover with indifference or apathy, some people were alert to what was happening and the threat it represented. 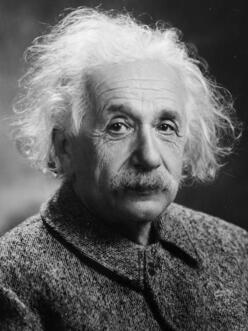 The organisation that became the International Rescue Committee was founded in 1933 at the request of physicist -- and refugee -- Albert Einstein.
Photo: Library of Congress

In July 1933, a committee of 51 prominent American intellectuals, artists, clergy, and political leaders formed a branch of the International Relief Association in New York, at the request of its chief, German-born physicist Albert Einstein. Among them were the philosopher John Dewey, the writer John Dos Passos, and the theologian Reinhold Niebuhr. Other prominent citizens, even including Eleanor Roosevelt, soon joined the effort.

Einstein arrived in America on October 17,1933 after he and thousands of other Jews fled persecution in Nazi Germany.

The committee established offices at 11 West 42nd Street, opposite Bryant Park and not far from the International Rescue Committee's current headquarters location. Its mission, as The New York Times reported on July 24, 1933, was to "assist Germans suffering from the policies of the Hitler regime."

Another group of leaders formed the Emergency Rescue Committee when Paris fell to the Nazis in 1940. As the crisis deepened into World War II, the two groups merged. And so came into being the organisation that would grow into today's International Rescue Committee.

At this time, there were no refugee programmes, no aid agencies to ensure the safety of refugees. IRC volunteers were among the first civilians to offer aid to Europe's displaced peoples after Germany's surrender and the official end of World War II in 1945, according to From Harm to Home: The Story of the International Rescue Committee.