“Before I die, I need to put my family back together”

Read about one family’s remarkable triumph over war, separation and illness.

Nora Giyee Issac Margani and her husband, Mahamed “Mawa” Emmanuel, sit nervously in the lobby of the International Rescue Committee’s resettlement center in Baltimore. Their anticipation is palpable.

Sixteen years ago, the couple fled the chaos and fighting in Sudan, moving first to Egypt, and then to the United States, both at different times. They escaped with their three children, but Mawa had to leave his five other children from a previous relationship behind. Now he was about to see them for the first time in over a decade.

Wiping sweat from his forehead, Mawa seems to be contemplating those lost years. He has been ill, a long struggle that has left him pensive and anxious. Then he looks up. There, coming through the lobby doors, are his three sons and two daughters.

Overwhelmed with emotion, Mawa collapses as his children rush forward. They embrace warmly, right on the floor, and Nora joins them. Mawa dissolves into giddy laughter, and just as quickly, breaks into tears, crying with relief that years of separation have been bridged at last. 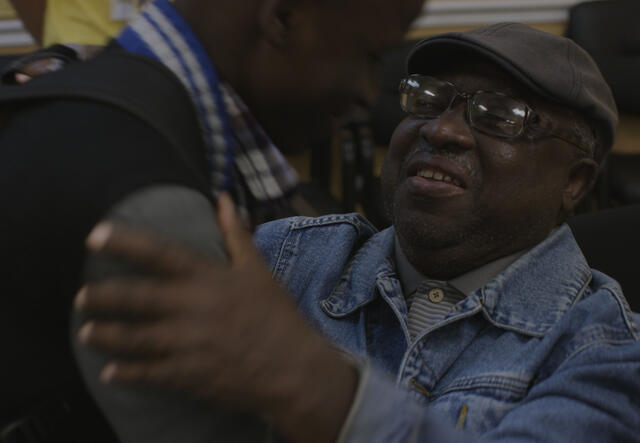 Mahamed “Mawa” Emmanuel embraces his 12-year-old son, a twin, after being separated from five of his children by war for nearly a decade.
Photo: Koi-Fly Productions

In 2000, Mawa, Nora and their three children were living in Juba, then a city in Sudan, now the capital of present-day South Sudan. Mawa traveled often for business, although he worried about the mounting violence during the country’s lengthy civil war, which eventually resulted in the independence of South Sudan in 2013. It proved only a matter of time before war broke out, and the chaos came to Juba.

“I decided I could not stay,” recalls Nora, who was alone when her neighborhood came under attack. “Running, guns, boom.” Her left kneecap has several scars from shrapnel. “There was no doctor, you had to treat yourself.”

Separated from Mawa, with no idea where he was or even if he were alive, Nora and the children made their way to a displacement camp in Sudan’s capital, Khartoum. Little did she know that this would be their home for three years.

As the fighting raged on, there was no word of Mawa. Meanwhile, she applied for resettlement in the United States, and the United Nations moved the family to Cairo. Two years later, Nora and the children emigrated to Baltimore. She believed Mawa had been killed in the war. 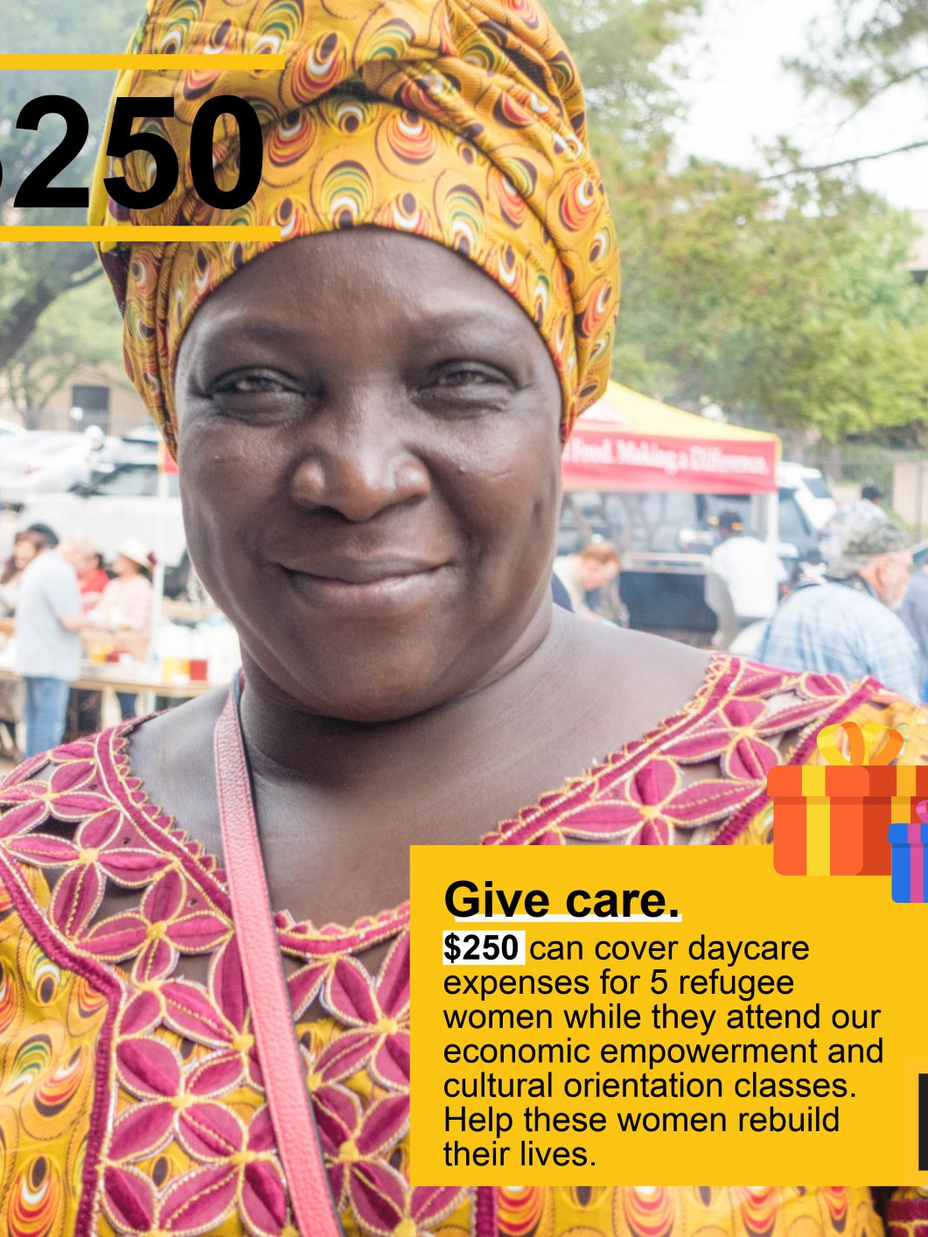 Determined to not give in to despair, Nora began to rebuild her life in Baltimore. She secured a housekeeping job with help from the IRC, and enrolled her children in school. She learned to navigate the strange city by riding buses from one end of a line to the other.

Then she received good news: her husband, Mawa, was alive and safe in Cairo. He had learned that Nora and their children had been resettled in the U.S. And with the help of the International Rescue Committee, Mawa and Nora were reunited in 2009.

They were elated to be back together, but their happiness did not last long. After only three months in Baltimore, Mawa became sick; doctors confirmed he was suffering from kidney failure. Johns Hopkins Hospital found a kidney donor and provided a transplant, but the procedure failed. Mawa would need dialysis three times a week for the rest of his life.

After dialysis, Nora remembers, Mawa would be very tired, but she had to go to work. “I had to leave him in the house by himself,” she says. “This is a bad thing…a dangerous thing. The children are at school, nobody in the house. I would pray to God, ‘Let him be in the house safe until I come.’ If he falls, nobody knows.”

Realizing time had become precious, Mawa made a wish: to be reunited with all of his children. “Before I die, I need to put my family back together,” he told Nora. 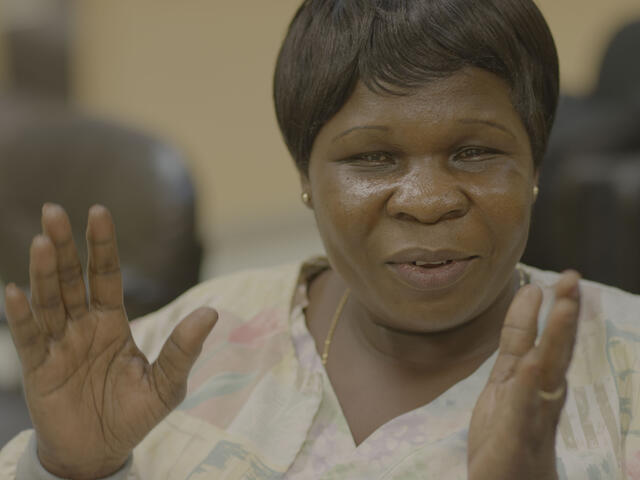 Nora Giyee Issac Margani, a refugee from South Sudan became an American citizen in 2012 after fleeing from the civil war in Sudan with her three small children. She was reunited with her husband, Mawa, in 2009.
Photo: Koi-Fly Productions

The IRC, working with a partner organization that specializes in family reunification, worked with Mawa to begin the application process, which would take several years and require detailed personal and background information for security clearance and proof of family ties. The mother was alive but her whereabouts was unknown; the children were staying with an aunt in South Sudan. Once located, they were relocated to Cairo to await approval to join their father in Baltimore.

As it turned out, Mawa’s children would be the first refugees from Africa to be resettled under the Affidavit of Relationship Program (AOR) since it was reopened in 2012 after a four-year hiatus.

“The process was very, very slow, and as the months and eventually years passed, Mawa grew increasingly anxious,” recalls Laura Brown, who works with IRC immigration services in Baltimore. “He called me often, leaving long voicemails asking me when his children were going to arrive. He sent me many handwritten letters, telling me how dearly he missed his children, and how much he hoped to be reunited with them soon.”

Last Christmas, Nora visited Brown to tell her that Mawa’s health had taken a turn for the worse. He’d been hospitalized and she feared he might not live much longer.

“Together we drafted an email explaining the situation and requesting that his case be expedited considering the dire circumstances,” Brown says. “We sent the email to our headquarters who forwarded it on to Egypt.”

Recognizing the urgency, the case was expedited and the children left for Baltimore on April 18. 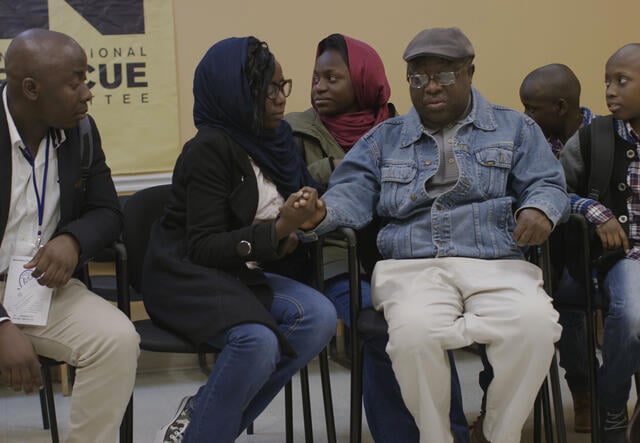 Mawa was with reunited with five of his children with the IRC’s help after he was diagnosed with kidney failure.
Photo: Koi-Fly Productions

Mawa’s five children sit silently during the drive to the resettlement center, grateful, as is their father, for their good fortune, and hard work, that has brought about their reunion. On this night the family is whole again.

“Today is a miracle day in my life,” Mawa says, holding back more tears. “Thank you, everybody. God bless you all.”

Nora continues to be the family’s main navigator and decision-maker as Mawa continues to struggle with his health, but Nora's children are thriving—her eldest has joined the Maryland National Guard. Making the most of her modest salary, she has saved to buy a car and recently became Baltimore’s newest homeowner.

Nora and Mawa look forward to furthering all their children’s education and helping them pursue their dreams in their new country.