Painting a picture of hope: artist and refugee Marc Chagall

Artist Marc Chagall, a pioneer of modernism celebrated as “the quintessential Jewish artist of the 20th century,” is known for his poetic, colorful paintings. He was also a refugee. And in his journey from Nazi-occupied France to safety in the United States, he was among the first to receive the aid of an organization that would later become the International Rescue Committee.

When the Nazis marched into Paris in 1940, Chagall was living with his family in the city that had been the embodiment of art and freedom. Despite the shock of Paris’s swift fall and Hitler’s increasing attacks on artists and intellectuals, the Russian-born painter initially thought that he would not have to flee.

It was only when the collaborationist Vichy government began passing anti-Semitic laws and removing Jewish people from public and academic positions that Chagall, who had already experienced pogroms in his native country, realized the danger that he and his family faced. By that time, their best chance of refuge was in the United States, an expensive journey for a painter who found it increasingly difficult to sell his artwork in war-torn Europe.

Luckily, a 32-year-old American journalist named Varian Fry was planning a clandestine operation to rescue some of Europe’s most famous artists, writers and intellectuals, including many whose names were on the Nazis’ most wanted list. Fry was sent on his mission by the Emergency Rescue Committee (ERC), which would combine in 1942 with the International Relief Association to form the International Rescue Committee.

Fry arrived in Marseilles in 1940 with $3,000 strapped to one of his legs and a list of some 200 people thought to be in imminent danger. He soon recognized that the need was much greater. Over 13 months, Fry and a small team of Americans and French operatives would help 1,500 refugees escape to Spain and provide aid for 2,000 others.

Chagall was among those ferreted to safety, though not without some hesitation. As Fry wrote in his memoir, Surrender on Demand, the painter of bucolic scenes nervously asked if there were cows in America. He was visibly relieved to hear that there were.

Unfortunately, within a year of the launch of Fry’s operation, the Vichy government clamped down on his efforts. In August 1941, Fry was expelled from France “for helping Jews and anti-Nazis.” In 1942, the ERC office was raided and closed. 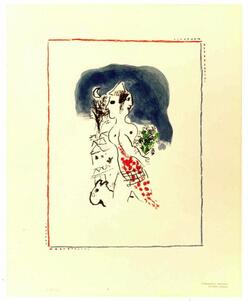 Back in New York, Fry tried to alert the world to what would come to be known as the Holocaust. His voice was not heard. Indeed, it would take years for Fry’s WWII work to be acknowledged. In 1967, he was awarded the French Legion of Honor just five months before his death. In 1996, he was posthumously awarded Israel’s “Righteous Among Nations” medal, the first American to be so recognized.

Chagall lived out the war in New York and returned to Paris in the autumn of 1947. In the late 1960s, the painter joined artists Joan Miró, André Masson and others in contributing to the IRC‘s “Flight” portfolio created by Fry to support the organization’s humanitarian work. The collection, which focuses on the refugee experience, continues to raise funds and awareness for the IRC’s work today.

When we welcome refugees, they bring more than their belongings. They bring hard work, potential and contributions. Often, they bring the humanity and optimism embodied by  Marc Chagall, who once said, “Despite all the troubles of our world, in my heart I have never given up on the love in which I was brought up or on man’s hope in love.”