Still in search of work - Creating jobs for Syrian refugees: An update on the Jordan compact 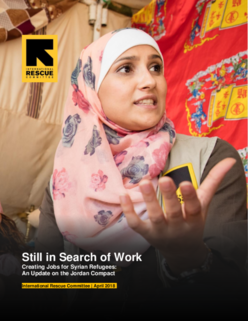 Report: Still in search of work - Creating jobs for Syrian refugees: An update on the Jordan compact

The Syrian refugee crisis is the largest refugee crisis of our time. The Syrian war, now entering its eighth year, has displaced more than 11 million Syrians—5.6 million of which have fled in search of a safer and more stable life outside of Syria’s borders. Today, Jordan is home 1.3 million Syrians, including more than 655,000 registered refugees, who are trying to recover and rebuild their lives.

In February 2016, as the number of displaced Syrians started to peak, the international community gathered in London to discuss a collective and more robust response to the regional crisis. A core outcome of the conference was the Jordan Compact—an agreement between the Jordanian Government, the World Bank, and the European Union—to improve the lives and livelihoods of Syrian refugees and vulnerable Jordanians.

The International Rescue Committee has been closely following the Jordan Compact, identifying lessons from its implementation that can help ensure the Compact—and similar agreements now being made elsewhere—leads to improvements in people’s lives. Our 2017 report, In Search of Work: Creating Jobs for Syrian Refugees: A Case Study of the Jordan Compact, found progress towards improving economic opportunities for refugees and vulnerable Jordanians was slow and uneven in the Compact’s first year of implementation.

This policy brief takes stock of progress of the Compact implementation two years on. It highlights new obstacles and ongoing ones, and notes the important headway Jordan and its partners have made in expanding livelihoods opportunities for Syrian refugees.

Although we are still unable to say that Syrian refugees and Jordanians are better off today than when the Compact was agreed, the Jordanian government has made ambitious and important policy decisions over the last year that could drive better outcomes moving forward. From amendments to the work permit process to a proposed expansion of a trade deal with the European Union, Jordan remains committed to supporting refugees’ livelihoods and ensuring they have a path to self-reliance.

This brief focuses on recommendations for the Jordanian government and its local and international partners to ensure that more sustainable job opportunities are generated and the needs of both Syrian refugees and Jordanians are met. It calls on the Government to reform its business formalization process and open more sectors in which Syrian refugees can work; on the EU to expand its trade agreement; on the World Bank to lead on more robust monitoring and accountability; and on all partners to make more concerted efforts to improve gender inclusion.