Here are six reasons the International Rescue Committee’s Emergency Watchlist ranks Venezuela among 20 countries most at risk of worsening humanitarian crisis in 2022.

Economic deterioration in Venezuela has driven the largest external displacement in Latin America’s recent history. The United Nations says that 6.8 million people have left—more than have fled any other country except Syria and Ukraine. Here’s what you need to know about what is happening in Venezuela.

The humanitarian crisis in Venezuela was triggered by the economic collapse that began in 2014 and has been deepening ever since. A quarter of the population is in need of aid. 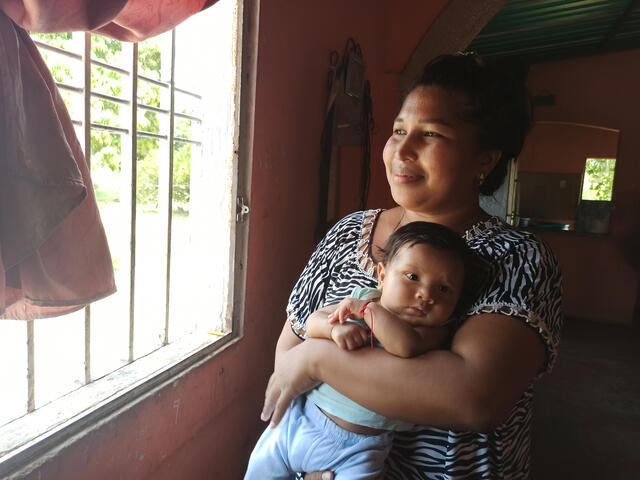 Lab technician and new mother Michel* received health care and other support from the IRC after giving birth to baby Nathan.
Photo: Everardo Esquivel for the IRC

The lack of mass conflict in Venezuela makes it distinct from most of the countries on Watchlist—a testament to the severity of the economic meltdown preventing millions of Venezuelans from meeting their most basic needs. The country’s health system has collapsed, and hyperinflation paired with shortages of essential resources such as water, fuel and medicine continue, causing social unrest.

“If you look at the number of people going hungry inside the country, and the millions that have left, [Venezuela] just falls right behind Syria and Ukraine, and it doesn't get that level of funding or that level of attention, or that level of assistance,” says Marianne Menjivar, director of the IRC’s Venezuela crisis response.

The economic crisis is pushing large swaths of the population into need, and many more will choose to leave in 2022.

Hyperinflation has caused the price of food and other basic goods to soar. Water, fuel and medicine are in short supply and power outages are common. Meanwhile, the COVID-19 pandemic has halted any economic growth needed to remedy the crisis. With 7 million Venezuelans already in need of humanitarian assistance and no signs of economic improvement, the number of people in need will likely continue to grow.

Earlier in the pandemic, border closures by Colombia and other nearby countries to prevent the spread of the coronavirus cut off many Venezuelans from access to aid or work opportunities. The  re-opening of the Colombia-Venezuela border could improve Venezuelans’ access to essential goods and services, like food and health care, but could also trigger a renewed exodus of Venezuelans.

COVID-19 is adding to economic challenges and burdening an already weakened health system. 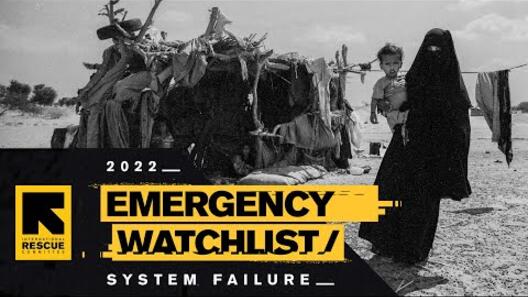 Latin America has been one of the regions hit hardest by COVID-19, and while Venezuela has made more progress vaccinating its population than many Watchlist countries, it lags far behind the U.S. and other countries in the Global North. As a result, the pandemic will continue to impact Venezuela’s economy and health system. For one, it is a contributing factor to economic contraction, with projections from the International Monetary Fund estimating another 3% contraction in 2022 along with extremely high levels of inflation and unemployment.

The economic crisis in Venezuela had also weakened basic public services well before the pandemic, with 30,000 doctors leaving the country over the past decade and a third of hospitals having no access to drinking water. The government’s ability to properly respond to the pandemic, both through testing and treatment, has been severely challenged.

Hunger is growing as the economic crisis deepens.

A third of the population, 9.3 million people, was acutely food insecure as of 2019 and, while data in Venezuela is often limited or missing entirely, this figure is likely growing; 14% of all children under age 5 in Venezuela suffer from global acute malnutrition; 57% of pregnant women are malnourished. 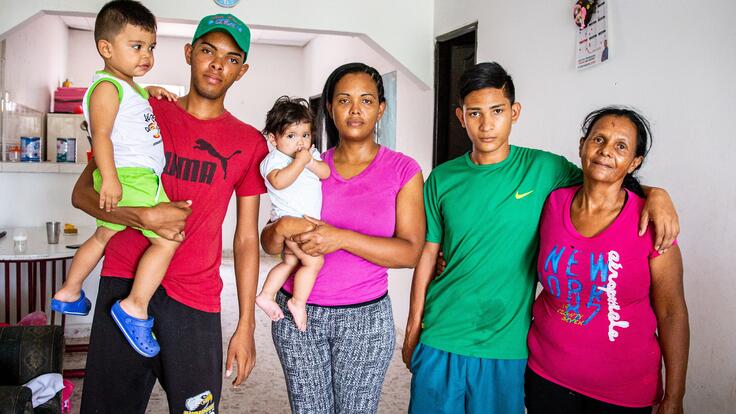 After arriving in Colombia from Venezuela, Cibel (center) gave birth to her daughter Diana with support from an IRC nurse. She and her family are living in the border town of Cucuta.
Photo: Andres Brenner for the IRC

Restrictions on humanitarian access will mean needs continue to go unmet in 2022, though there are some positive signs.

In 2021, ACAPS, an independent information provider for humanitarians, assessed Venezuela to have “very high” access constraints, but there are some signs of progress, including a new agreement to allow the World Food Programme to start delivering food aid inside the country and a new registration process for aid groups. Both steps could enable the humanitarian response to significantly scale up if humanitarians can operate without undue restrictions.

Conflict involving non-state armed groups along the Colombia-Venezuela border has worsened the humanitarian crisis and could threaten regional stability.

Clashes between Venezuelan forces and armed groups from Colombia, as well as between armed non-state groups over contested territory within Venezuela, increased in 2021. The violence has displaced thousands from border areas in Venezuela—mostly the southwestern state of Apure—into Colombia and could escalate further given rising tensions between Caracas and Bogotá.

Many of the over 6 million Venezuelans who have left have travelled to neighbouring countries such as Colombia, Ecuador and Peru, while others have headed north in hopes of asylum in the United States or Mexico.

In the U.S.: In a welcome move, the Biden Administration will be providing a new humanitarian parole programme for some Venezuelans. The programme, similar to the one offered to Ukrainians, will be available for certain Venezuelans who have a private sponsor in the U.S.

Although this change will allow the U.S. to quickly process some vulnerable Venezuelans, many will continue to be turned away and sent back to Mexico under the previous administration’s harmful Title 42 policy. This includes Venezuelans without a private sponsor as well as asylum seekers fleeing countries such as Haiti and Honduras.

Learn more about why seeking asylum is a human right.

In Colombia: More than 1.8 million Venezuelan migrants were living in Colombia by the end of 2021. In addition, hundreds of thousands crossed at official points each day to purchase food and receive vital medical assistance, among other services that are not available in Venezuela.

When the border was closed due to the COVID-19 pandemic, Venezuelans were cut off from these critical services. Those who chose to cross during this time had to use illegal border crossing points, so-called “trochas,” which are often controlled by illegal Colombian armed groups or organised crime and which charge migrants fees and expose them to the risks of recruitment, sexual violence and robbery.

Over 7 million Venezuelans have left their homeland since 2015—and over half of them now face challenges accessing food, housing, and stable employment.

The world must not forget about these people. https://t.co/QUmwiryQ8S

As Colombia recovers from its own armed conflict, capacity is stretched thin. The country hosts over 2.5 times as many Venezuelans as Germany does Syrians, with only eight percent of Germany’s GDP. Venezuelans face limited income-generating opportunities, and around half live below the poverty line.

In Ecuador, where more than 400,000 Venezuelan migrants had arrived by December 2021, the situation is even more urgent. Changes to a former open-door policy, the crisis derived from COVID-19, and widespread xenophobia leave Venezuelans vulnerable, open to exploitation and discrimination.

In Peru: More than 1 million Venezuelans have tried to settle in Peru since 2016, where border closures to help contain COVID-19 and an economic slowdown have made it extremely difficult for them to afford basic needs like food and shelter. Many are living in overcrowded housing or on the streets.

How the IRC helps in Venezuela

The IRC supports vulnerable populations inside Venezuela through our work with local partner organisations, and we are also on the ground assisting Venezuelans in Colombia, Ecuador and Peru. We provide cash assistance, and health and malnutrition prevention services, and we work to the prevention and responds to gender-based violence. We also protect children and adolescents with psychosocial services and education. 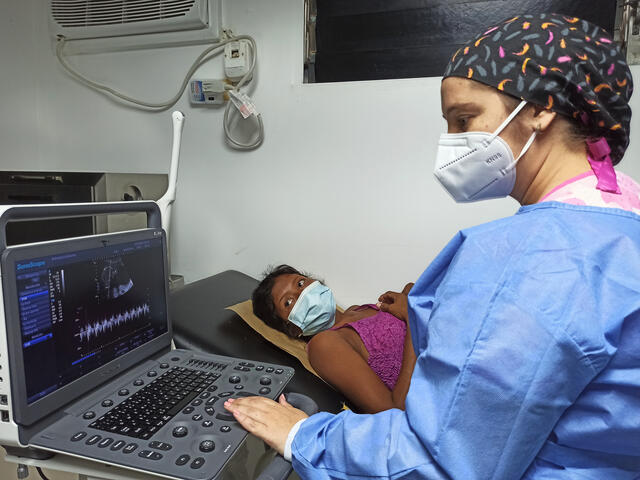 In Venezuela and neighbouring countries, the IRC is providing care to new mothers and their babies along with other health services.
Photo: Everardo Esquivel for the IRC

Additionally, we have launched InfoPa’lante (part of the Global Signpost project), a digital platform to help displaced populations access information about civil and legal rights, employment, health care and COVID-19.

We also contribute to the COVID-19 response in Venezuela by supporting mobile health clinics and providing personal protection equipment (PPE) for doctors and nurses.

How can I help in Venezuela?

Donate now to support the IRC's life-changing work in Venezuela and worldwide. We are on the frontlines providing critical aid to crisis-affected people in more than 40 countries, including places on the 2022 Emergency Watchlist.

Along with Venezuela, the IRC also identified Haiti and Honduras as the countries most at risk of experiencing deteriorating humanitarian crises in 2022 in Latin America and the Caribbean.