January is National Slavery and Human Trafficking Prevention Month and the IRC is working to raise awareness and train community members to identify and report potential trafficking cases in both the Big Bend and South Florida.

In Tallahassee and the surrounding areas, the IRC worked closely with partners at Survive and Thrive Advocacy Center (STAC) and the Big Bend Coalition Against Human Trafficking (BBCAHT) to build public awareness through a series of trainings, events and media appearances. The Big Bend is particularly vulnerable to trafficking due to its proximity to Interstate 10, a known trafficking corridor; high rates of economic insecurity; a large agricultural sector and ongoing recovery from Hurricane Michael.

In Miami, ahead of Superbowl LIV, the IRC partnered with Florida’s Attorney General, Ashley Moody, and Uber to educate thousands of drivers on how to spot and report human trafficking. The IRC’s Caridad Mas-Batchelor delivered the training. “Partnerships and collaborations are vital to our fight against human trafficking,” she said. “We are so grateful to have the opportunity to reach Uber’s Florida workforce through these trainings. As Uber drivers, they are on the front lines in terms of identifying and reporting potential cases. Being aware and vigilant is the most crucial thing Floridians can do to protect those who are vulnerable to trafficking.” 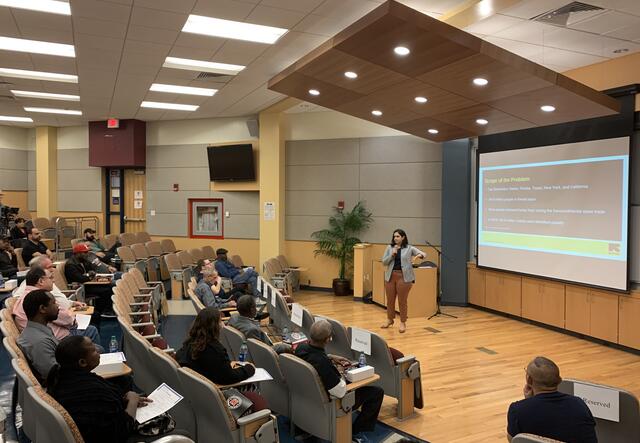 The IRC was one of the first organizations in the nation to receive federal funding to combat human trafficking after legislation was passed in 2003. Since then, the IRC in Florida’s Anti-Trafficking team have trained more than 12,000 professionals to identify and report potential trafficking cases and provided services to over 530 foreign-born and domestic survivors of human trafficking.

Florida ranks third in number of cases reported to the National Human Trafficking Hotline, with 767 cases reported in 2018. To report suspected human trafficking or to obtain resources for victims, please call 1-888-373-7888; text “BeFree” (233733), or live chat at HumanTraffickingHotline.org. The toll-free phone, SMS text lines, and online chat function are available 24 hours a day, 7 days a week, 365 days a year. Help is available in English, Spanish, Creole, or in more than 200 additional languages.  The National Hotline is not managed by law enforcement, immigration or an investigative agency. Correspondence with the National Hotline is confidential and you may request assistance or report a tip anonymously.

To learn more about the work of the IRC in Florida and for information on how you can get involved with the IRC as a donor or volunteer, please contact Development Manager, Kalie Lasiter, at [email protected] or 678-636-8941.