The U.S. and the Holocaust: GPB Screening and Panel Discussion 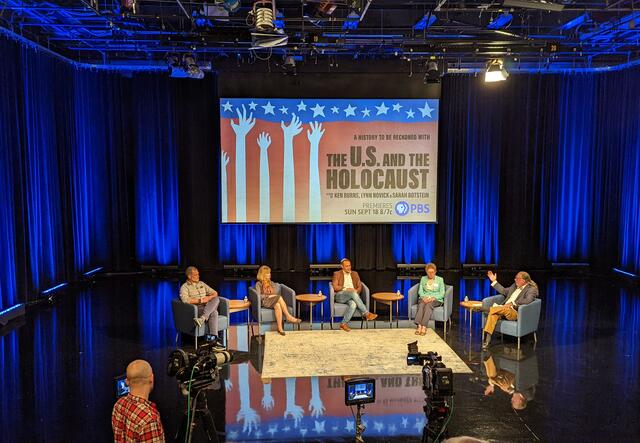 The IRC in Atlanta’s Executive Director, Justin Howell, was invited to speak as part of an important panel discussion following a screening of 'The U.S. and the Holocaust.'
Photo: IRC Atlanta

On the evening of September 28, the IRC in Atlanta’s Executive Director, Justin Howell, was invited to speak as part of an important panel discussion following a screening of The U.S. and the Holocaust, a new three-part documentary by Ken Burns, Lynn Novick and Sarah Botstein that examines America’s response to one of the greatest humanitarian crises of the twentieth century.

WATCH: The U.S. and the Holocaust: GPB Panel Discussion Recording

“It was an honor to join prominent members of the Jewish community to discuss the lessons learned from the U.S.’s anemic response to our Jewish brothers and sisters seeking protections from Nazi atrocities,” shared Justin. “In the U.S. during the 1930s and 1940s there was a general animus towards Jews in particular and immigrants broadly, U.S. immigration policies were unwelcoming to those fleeing persecution, and examples abound of dehumanization and intentionally stoking fear towards Jews and other immigrants—this xenophobia and scapegoating of immigrants draws chilling parallels with our current cultural and political climate. I hope that this discussion will help us all better understand the human cost of inaction in the face of oppression and leads to a recommitment among communities throughout this country to actualize the American ideals of freedom and hope for all who seek the protections and opportunity that this country claims to offer the world.”

To learn more about the work of the IRC in Atlanta and for information on how you can get involved with the IRC as a donor or volunteer, please contact Senior Development Manager, Heloise Ahoure, at [email protected] or 678-636-8941.

This holiday season, you can also make a lasting impact. Please join us in supporting courageous refugees rebuilding in Atlanta.
Donate Now
×