Despite countless hurdles, all-women teams of medical doctors are braving long distances and treacherous terrain to bring health care to the remotest villages in Afghanistan, reaching women who lack access to health services, some for up to 50 years.

Dr. Najia Tareq, a gynecologist with years of experience in public health, felt anxious the day the Taliban entered Kabul a year ago. “The political transition was very difficult for us,” she says. “We were concerned about our futures and thinking, what will happen to us?” 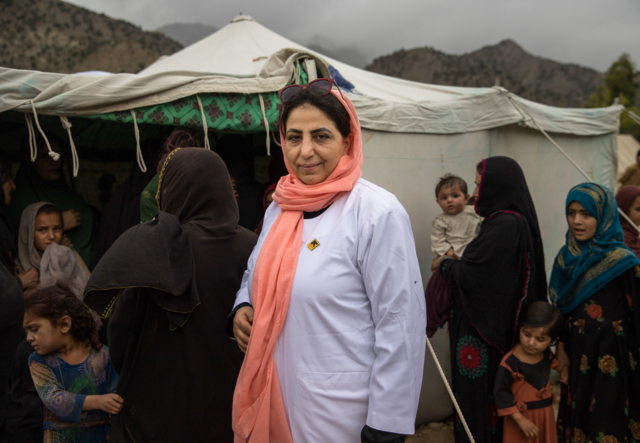 Dr. Najia’s family had encouraged her to become a doctor from a young age. When she began her studies, she soon discovered the dire need for female specialists in Afghanistan.

She remembers better times for women in her country, recalling her student days at Kabul Medical University. “It was a good environment for women and girls back then,” she says. “Everyone could study in Afghanistan or abroad.”

After completing her training as a doctor, Dr. Najia was determined to make strides in her career. Before joining the IRC, she served as director of a maternity hospital, then worked for years in the Ministry of Public Health, traveling to remote provinces where there are often no roads or bridges and few hospitals.

The mobile health team gets ready to head out on a visit to a remote village in Khost, located in southeastern Afghanistan.
Photo: Oriane Zerah for the IRC

Her work with the ministry impressed upon her the plight of women and girls in rural Afghanistan, who are routinely denied access to the health care enjoyed by men in their villages. Many women and girls are not comfortable visiting male doctors. So Dr. Najia decided to form an all-female mobile health team, to ensure that women could visit qualified female medical specialists.

“I was inspired to build a system where everyone has equal access to health care services,” she says. “This is what brought me to the IRC. They work in 10 provinces, and have mobile health teams that could travel to hard-to-reach districts.” 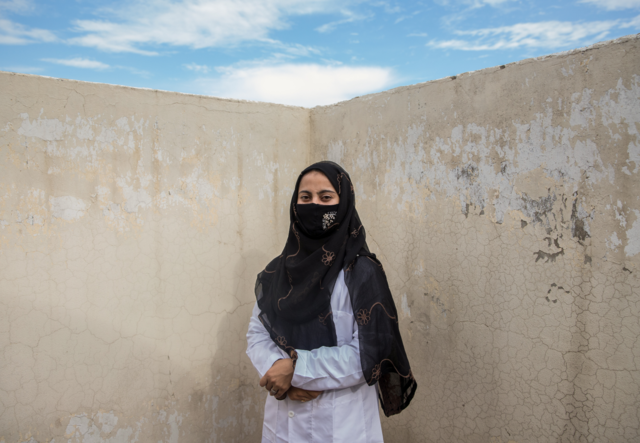 Amna’s determined to be a source of support for women who otherwise have none.
Photo: Oriane Zerah for the IRC

Amna Gul, a 25-year-old provincial health manager with the IRC, also knows first-hand the hardship of being a woman in Afghanistan and, like Dr. Najia, decided at a young age to become a doctor.

"My mother struggled to find the right health services as a young girl, or when she was pregnant,” she says. “So when I was growing up, she always encouraged me to become a doctor to support other women in need.” 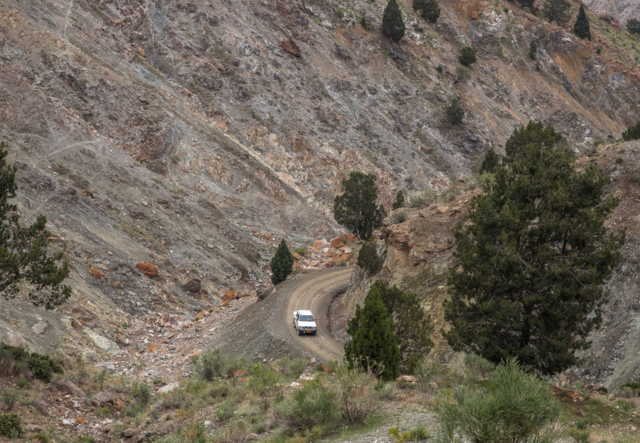 Mobile health teams often traverse muddy paths and terrain with no proper roads to reach their destination. Sudden events such as heavy rainfall and flash flooding can make the journey even more perilous.
Photo: Oriane Zerah for the IRC

She recalls how she felt last year, when the change in government became official. “I had called my office and asked them whether I should come in,” she says. “They told me not to come in until they called me. It was a blackout everywhere,  where we felt like we could not move or survive. It really took away our enthusiasm and spirit to go outside and serve people in need.”

Today, Amna’s spirit shines brighter than ever. An experienced leader of three mobile health teams, she was instrumental in founding the all-female mobile health team in Khost, a remote province in southeastern Afghanistan. “I had thought to myself, will it be possible to [form this team]? Then I thought — if we really want to do this, then it should be easy for us to do something.” 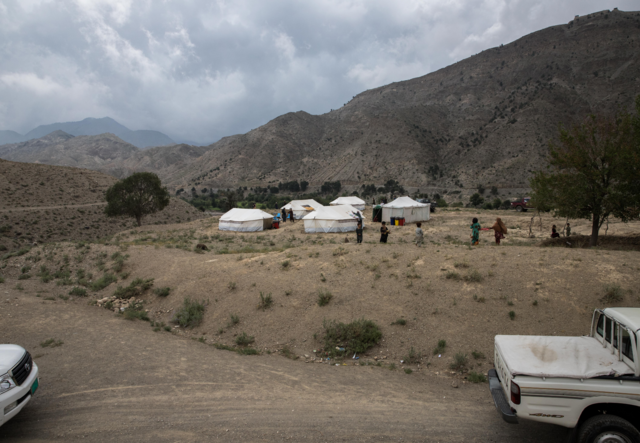 Many villages in Afghanistan — such as the remote district of Spera, a 3-hour drive from the IRC’s office in the province of Khost — do not have any hospitals nearby.
Photo: Oriane Zerah for the IRC

Despite their critical work, these humanitarians — like many women in Afghanistan — must have a male chaperone accompany them nearly everywhere they go. This can prevent them from doing their work even in life-and-death emergencies, such as the earthquake that struck Afghanistan on June 22nd and killed 1,000 people.

When the quake struck, the IRC responded by deploying mobile health units to affected villages. Amna’s mobile health team was one of these. 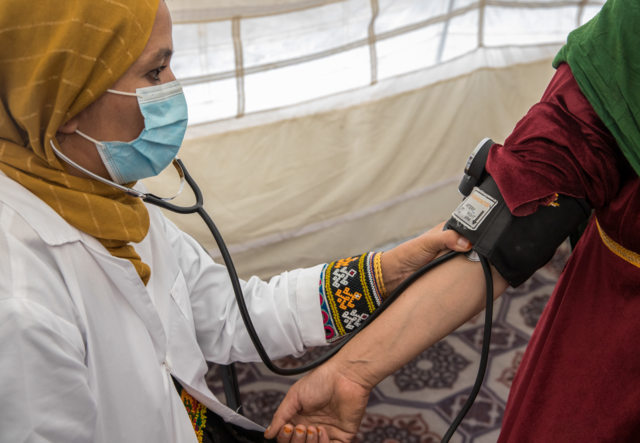 An all-female mobile health team is crucial for women living in villages who need medical assistance to keep themselves healthy.
Photo: Oriane Zerah for the IRC

“It was a dark, rainy day, and the road was rough,” she says, recalling the events of that morning. “Around 6 p.m., we lost communication with the team who had gone there.”

It was a long and arduous wait throughout the night, but relief washed over her when the office finally contacted her in the morning and assured her they were safe. Despite the dangerous journey, they had managed to treat 116 patients through the night. 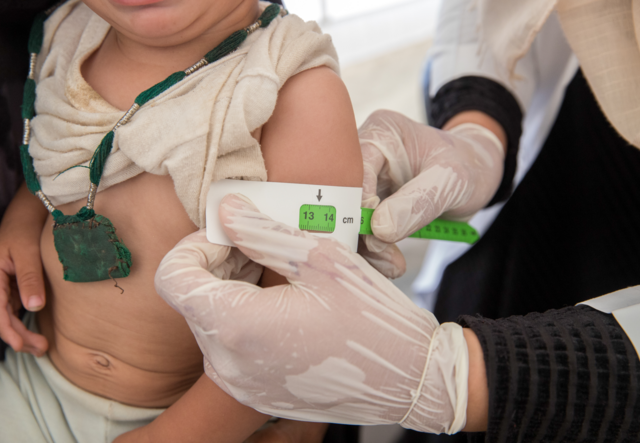 One of the functions of the mobile health team is to screen and treat young children for malnutrition — an increasing problem as the economic crisis worsens.
Photo: Oriane Zerah for the IRC

Through all the risks they face while doing their work, Dr. Najia and Amna share a passion as humanitarians: to uplift the women around them, who often have no one to turn to.

“I want to give women in Afghanistan all the human rights that are given to other women around the world—the right to study what they want, and most importantly, the right to their own freedom,” says Amna, speaking with her usual determination.

Dr. Najia echoes her thoughts. No matter what obstacles are thrown her way, she never wavers. “I want to show my people—especially the men—that we have the capacity, knowledge and skill, just like them,” she says. “Women, too, can contribute to the development of Afghanistan. 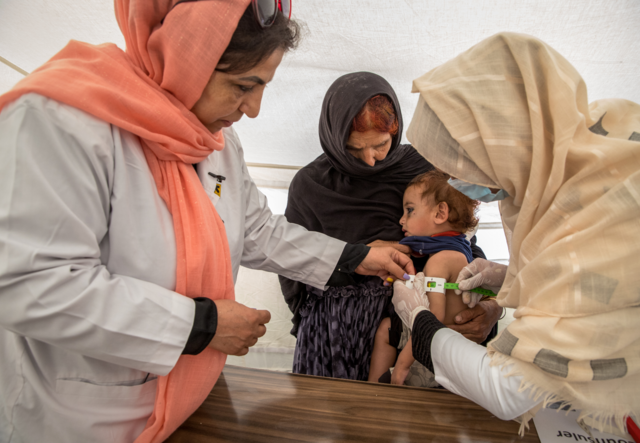 Dr. Najia loves to support her team. “I am proud of them,” she says. “They all feel that the women and girls in these areas need their help.”
Photo: Oriane Zerah for the IRC

In the last twelve months, the IRC has doubled-down on its commitments to the Afghan people. Our staff–99 percent of them Afghans themselves–are now operating across 12 provinces. They provide vital health services, education and support for women and girls in communities where we have developed deep relationships with community leaders. At the same time, our teams have tirelessly advocated for the inclusion of women in the humanitarian response and the IRC has maintained a staff body comprising 40% Afghan women.

Donate to the IRC to help us continue our critical work in Afghanistan and around the world. Give today and your gift will be automatically tripled.