“Courage is not being afraid to fail.” Meet ballerina Christine Shevchenko

Christine Shevchenko, a principal ballerina with the American Ballet Theatre, moved to Philadelphia at age 6. Having trained as a gymnast and studied ballet in her native Ukraine, she enrolled in the Pennsylvania Ballet’s Rock School and soon was dancing the children’s lead in The Nutcracker.

Shevchenko joined the American Ballet Theatre as an apprentice in 2007, the corps de ballet in 2008, became a soloist in 2014 and a principal dancer in 2017. Her extensive repertoire with the company includes the title role in Firebird, Odette/Odile in Swan Lake, and the Dryad Queen in Don Quixote. The International Rescue Committee (IRC) spoke with her about her life and work and her efforts on behalf of refugees and others who have had to leave their homes.

Can you tell us about your family? What was it like growing up in Ukraine?

I was born in Odessa, into a family well immersed in the arts and sports worlds. My father was a well-known gymnast, his father was a sprinter. On my mom’s side, you had musicians and actors and singers.

When I was four years old, my father enrolled me into rhythmic gymnastics school—basically, they trained gymnasts to compete at the Olympics. It was intense. My early memories are of kids crying every day because they would push everyone and work them really hard. But this is where I learned discipline and hard work. That training set me up for the rest of my life and taught me to be a strong person and a hard worker. And to never quit.

Along with this came ballet classes that were required for an hour a day. I didn't really love it until my mom took me to see a performance of Sleeping Beauty when I was just 4 years old. We stood backstage for the entire three-hour performance. I was hypnotized and immersed by the beauty of the costumes and the sets and the music. I just wanted to be a part of that world. 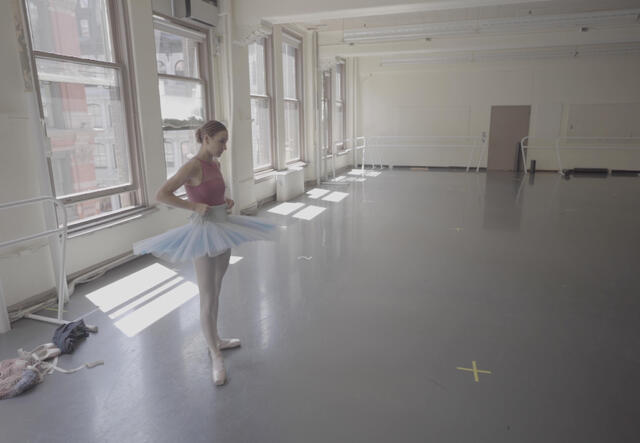 Christine was 4 years old when she fell in love with ballet, when her mother took her to see a performance of Sleeping Beauty. "I just wanted to be a part of that world," she says.
Photo: Andrew Oberstadt/IRC

You and your family were forced to move to the United States. What do you remember about that time?

It was the collapse of the Soviet Union. I just remember Ukraine being very uneasy, people sort of did whatever they wanted. My mom was scared, and I remember her saying that she didn't want me to grow up in that environment.

We decided to move to America because my grandfather had gone there 10 years prior.

Not until we arrived in America did it hit that we were starting a whole new life, and that our past life was gone.

I remember packing all of our things into very large duffel bags. I remember getting on a very long train ride because we had to fly out of Moscow, I believe. And then we got to the airport, and it was a long wait there. For me, it seemed like an eternity till we got on the plane.

But I didn't really know what to think at the time, or where we're going, or what it was going to be like.… Not until we arrived in America did it hit that we were starting a whole new life, and that our past life was gone.

So here you were, just 6 years old, and as you say, starting a whole new life.

Christine says that her ballet and gymnastics training as a young girl in Ukraine taught her to be a strong person.
Photo: IRC

At first, I didn't have much interaction with kids or other people until we settled in and figured out where I was going to go to school and all those things. I obviously did not know a word of English. I was basically playing catch up, so I definitely felt like an outsider and definitely felt uncomfortable.

How do you think those earlier experiences impacted your career as a dancer?

Being a performer, anyone who goes on stage, requires a lot of courage. Every time you step out in front of people, you’re putting yourself out there to be judged. You have to have the courage to fail. There have been many times where I haven't given the best performances possible, or I didn't feel good about them. But you have to have the courage to go back and to do it again and to do it better

I truly believe that art unites people, it takes them outside of their daily lives and into this amazing world where they can, you know, dig deep into their own emotions. My favorite part about performing is seeing the reactions on people’s faces. I’m a giver … when I make people happy, it makes me happy.

Every time you step out in front of people, you’re putting yourself out there to be judged. You have to have the courage to fail.

What would be your advice to young refugee artists, or any young person who has faced difficulties?

I would say that, if you have a passion, if you have a goal … if you put in the hard work, no matter if things don't turn out or if you fail … if you continue pushing, at the end of the day, you can achieve your goals and your dreams.

You have become part of the IRC family, working with young refugees and immigrants.

Christine encourages young refugees and immigrants to work hard and find their courage: "Starting a new life may seem scary ... but it could be a chance to achieve whatever you want."
Photo: IRC

I’d been searching for a charity, trying to see which one best fit best with what I believed in. And when I heard of the IRC, I literally thought it could not be more perfect because I was a refugee coming to this country.

That was a scary time for me. But now I get to talk to kids who are refugees today. It’s just so inspiring, and so fulfilling to hear about their life stories and where they're from and what they want to be in the future.

I live in New York City, which is full of immigrants and refugees. There's so much to learn about so many different human beings who come from all over, creative, smart minds—they’re bringing something special from another country that will help to create better and greater things here.

I want to say to all refugees and immigrants, starting a new life may seem scary, it may seem hard, and it might not be something you want to do. But it could be a chance to achieve whatever you want . It could be the craziest, biggest dream in the world, but if you have the courage and the bravery to pursue it, if you put in the hard work, everything is possible. 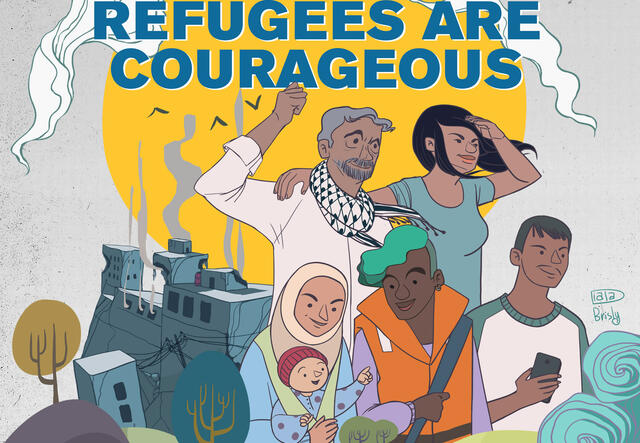 This World Refugee Day, the IRC is proud to honor courageous artists like Christine who are using their creativity to connect and heal—bringing us together. Through their painting, their dance and their song, these artists open a door into their world and show us who they are beyond the label of refugee. They inspire us and shape communities for the better. Learn more and take action at Rescue.org/Courage.