Since 2014, economic upheaval and political turmoil in Venezuela have caused more than 3 million people to flee the country, and this number is likely to rise as the crisis intensifies. Escaping devastating shortages, unemployment and soaring inflation, these refugees turn often to their country's closest neighbor, Colombia.

An International Rescue Committee team recently spoke with Venezuelans and Colombians living in Cúcuta, a Colombian border city straining under the influx of hundreds of thousands of Venezuelans ,many of whom are squatting and sleeping in the streets. The people interviewed often explained their situations by referring to tangible things, like the bit of fruit that served as the day’s only meal. Here's a look at 10 objects that explain how the crisis in Venezuela impacts peoples' daily lives. 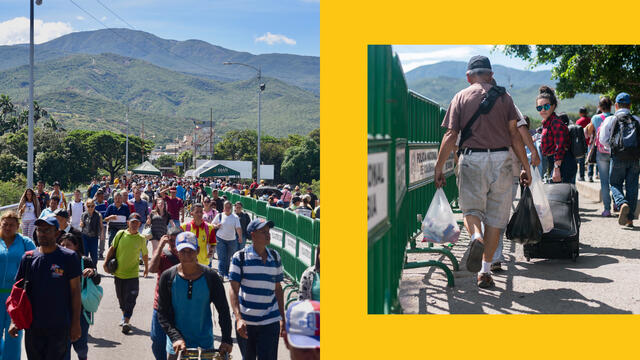 Every day, about 35,000 Venezuelans cross the Simon Bolivar Bridge to Colombia: some to work, others to escape violence and instability in their country. 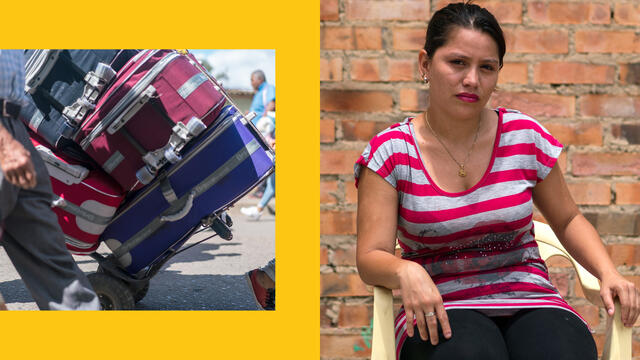 Out of the estimated 35,000 Venezuelans who cross the bridge daily, about 5,000 do not return home. They seek shelter in Cúcuta or they continue traveling into Colombia or beyond.

“My children were suffering from hunger," says Carla.* "I didn’t have anything to give them to eat. I crossed the border.”

A bag of mangoes 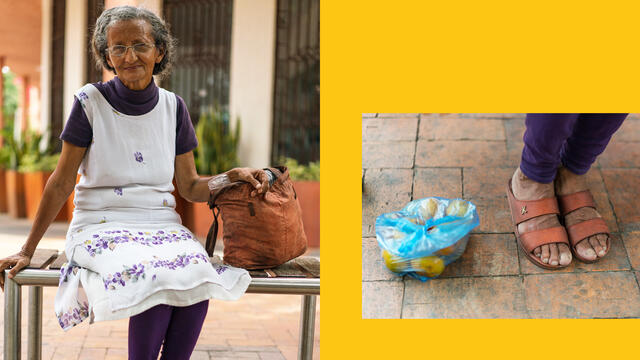 The country’s economic crisis has made it impossible for many people to earn enough to feed their families. One woman interviewed by the IRC team had only a mango to eat all day.

“You couldn’t find food,” says Tania, a secretary and teacher now homeless in Cúcuta. “Little by little I had to sell of my things.” She tries to get money for food by recycling bottles, but in the end relies on the kindness of strangers. 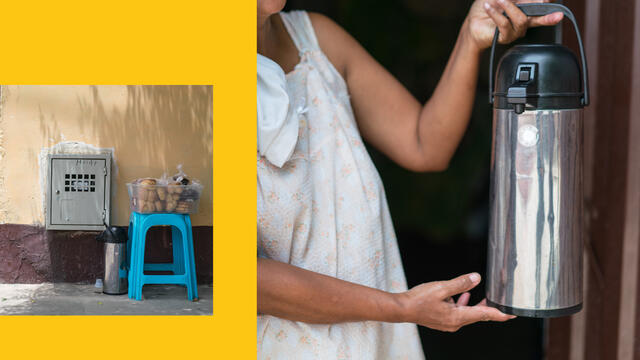 Maria crosses the bridge almost every day to sell coffee and baked goods in Colombia. Tens of thousands of Venezuelans flock daily to markets in Cúcuta, where they can purchase lifesaving items such as food and medicine.

A lock of hair 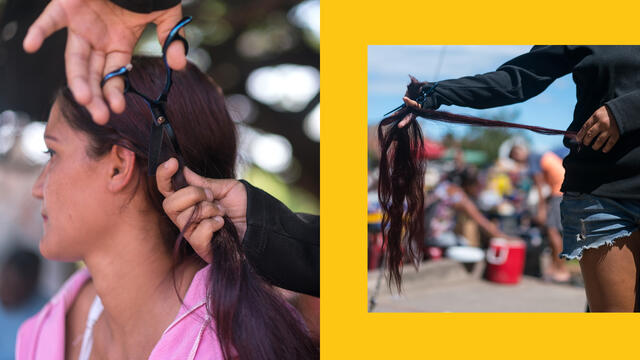 Some Venezuelan women and girls have been reduced to selling their hair—the last possession of value they own. Colombian wigmakers and merchants seek them out at the border, knowing migrants are desperate. 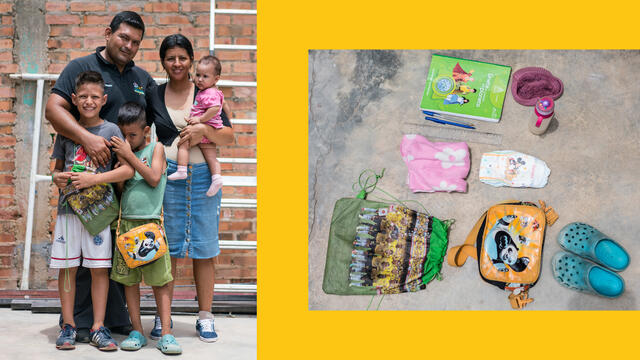 Sofia and Luis arrived in Colombia with their two sons and baby daughter—in Venezuela, a week’s worth of diapers costs the equivalent of three months’ minimum wages. They used to work in transportation, but now they take odd jobs, like cutting hair, to provide for their family

"We hope that while we are here someone can help open up doors,” says Sofia, “so our children can grow up, study, prepare themselves and have a normal life. That’s all we ask for, a normal life for our kids.” 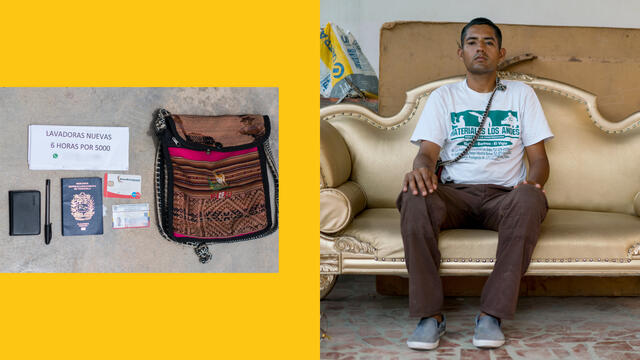 Giovanny entered Colombia legally to look for work, but he had to leave his wife and children behind—a wrenching choice many Venezuelans have had to make. Many others cross the border and stay illegally, making it harder for them to receive essential services like medical care.

"What we are experiencing in Venezuela is real,” says Giovanny, who plans to bring his family to join him in Colombia as soon as he can. "We will leave our stuff there, leave our house, leave our previous life. It’s hard." 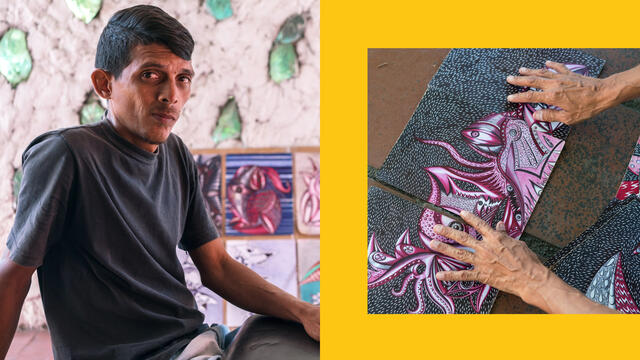 Josué is a Venezuelan artist living on the streets in Cúcuta. He made enough money for food by selling his paintings, which he carried with him wherever he went, but recently his painting supplies were stolen. He no longer can pursue his livelihood. Street crime targeting vulnerable migrants is another common problem.

“At night we don’t go out because it’s dangerous,” says one­­ Venezuelan woman who has been living in a public park. 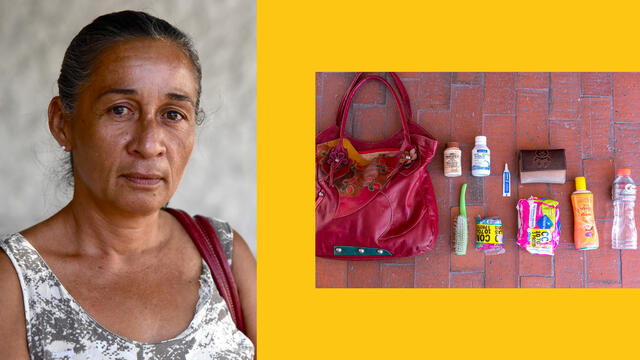 Iliana might be homeless, but she feels lucky to have a purse with a wallet, hairbrush, talcum powder, body lotion and foot cream, and feminine hygiene products.

"These things don’t exist in Venezuela,” she says. “This is a privilege.” 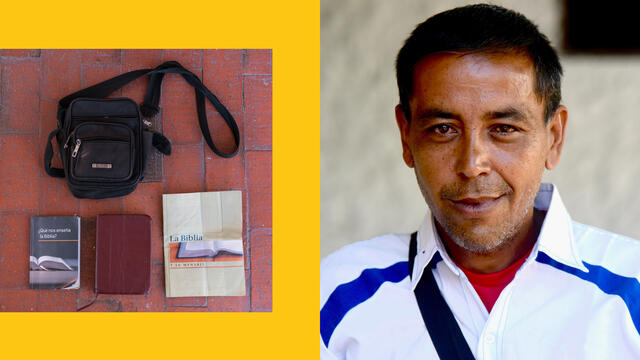 Carlos, a science professor and lawyer, had lost both jobs in Venezuela. He too is struggling to survive in Cúcuta.

“I’m living in the streets,” he says. “I can’t bear to bring my wife and children here.”

His possessions include a black bag containing a Bible and other religious texts.

With no end in sight to the crisis, and despite his faith, it is likely that things will get worse for Carlos—and the people of Venezuela.

The IRC is providing lifesaving support to those in need in Venezuela and Colombia. The IRC has launched an emergency response program in Cúcuta, Colombia, providing hundreds of people with critical cash assistance. The IRC has also implemented a child protection program, Families Make the Difference, in response to the increased risk of domestic violence, neglect, adolescent pregnancy and sexual abuse among displaced Venezuelans and Colombians. The IRC is also working with partners on the ground to extend vulnerable groups' access to health care.

*Names in this article have been changed to protect privacy.