The world's worst humanitarian crisis is in Yemen

This week the war in Yemen enters its fourth year. Since the start of the conflict, basic services in Yemen have become nonexistent. More than half of all health facilities in the country are nonfunctional, and three-quarters of the population, 22 million people, are in need of immediate humanitarian assistance.

What makes this conflict so heartbreaking is its cruelty, the warring factions deliberately targeting civilians and civilian infrastructure. International humanitarian law stipulates that hospitals, schools and similar facilities remain off limits to combatants. Both government forces and militants have violated these laws. According to the Yemen Data Project, least 4,500 airstrikes have hit gas, electric, transportation and other essential infrastructures, including 68 strikes on health clinics and hospitals and 342 on educational buildings. The destruction has pushed eight million people to the brink of starvation, 1.8 million of them children suffering acute malnourishment.

Yemen is on the verge of becoming a failed state. Mothers helplessly watch their children grow ill. 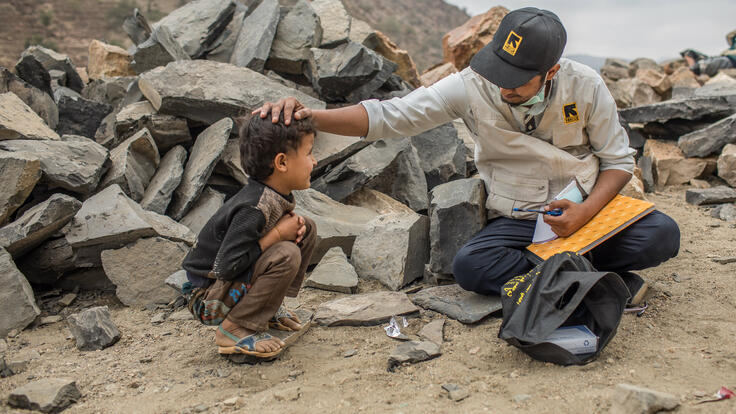 Since the outbreak of fighting, the International Rescue Committee has been on the ground in Yemen doing incredible work under extremely difficult and dangerous conditions. Each working day our mobile health clinics travel up to five hours in remote mountainous regions to reach isolated people entirely dependent upon our health care services. The IRC screens children for moderate and severe malnutrition and puts those in acute distress on nutrition regimes. We provide immunization to stop the spread of disease and livesaving medicine to those already ill. Sadly, this work amounts to a drop in the bucket compared to the suffering afflicting Yemen. 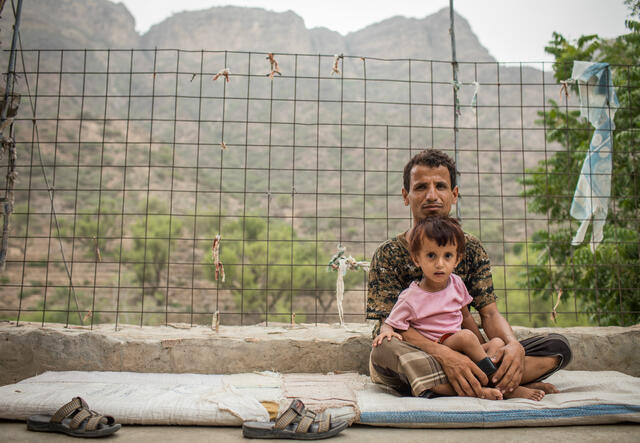 Abdul Ghafar’s family lives in a remote village in the mountains of southern Yemen. An IRC mobile health clinic comes to the village every Wednesday to screen children like Abdul's son, Abdullah, for malnutrition.
Photo: Kellie Ryan/IRC

Abdul Ghafar lives in a remote village in the mountains. The nearest medical facility is an IRC-supported health center two hours away. There are no cars available, and even if there were, the cost of gasoline has skyrocketed since the start of the war. The IRC mobile health clinic comes to Abdul’s village every Wednesday.

But early one Monday morning, his three-year-old son, Abdullah, became ill, “One night, he was vomiting and having diarrhea,” Abdul recalls. “I knew the IRC mobile clinic was coming here in two days.”

Cholera is a fatal bacterial disease, typically contracted from infected water and causing severe vomiting and diarrhea. It can kill within hours if left untreated. Yemen is experiencing the largest outbreak of cholera in recorded history, having surpassing one million suspected cases last December. 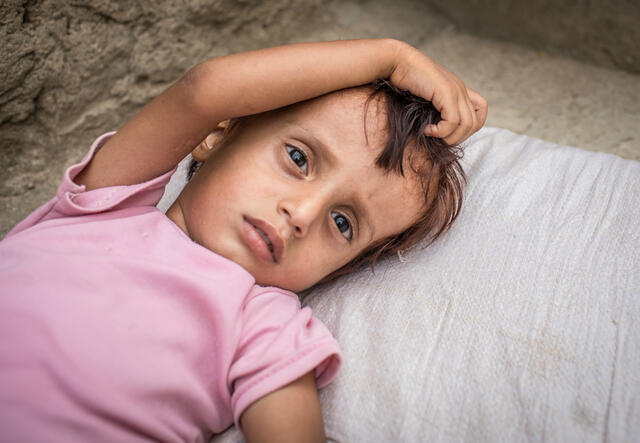 Abdullah was born the same year civil war erupted in Yemen. “Ever since this child was born, he has been sick,” says his father, Abdul Ghafar. “Sometimes we have one meal a day. Sometimes we don’t eat at all.
​
Photo: Kellie Ryan/IRC

Abdul brought his son to the IRC clinic that Wednesday, where Abdullah was given an IV drip and medicine. The boy was also suffering from severe acute malnutrition. But he was lucky … he survived the ordeal, although his life, like everyone’s in the village, is fragile.

Abdullah was born the same year civil war erupted in Yemen. “Ever since this child was born, he has been sick,” laments Abdul. “Sometimes we have one meal a day. Sometimes we don’t eat at all. I am not thinking about me eating, I think about my children. I buy juice or biscuits and feed them that. This is all we have. Without the IRC, my son was going to die in my arms.”

As the war wages on, more civilians are put at risk.  “The wars and the fighting is the reason my son is always sick, and why I cannot find a job,” says Abdul. “I just want safety and security. Everyone needs to be able to feel safe when they leave their home.”