Game of Thrones cast members visit IRC programs in Greece, call on EU leaders to do much more for refugees currently stranded in Greece

Athens, Greece, July 1, 2016 —  Game of Thrones’ Lena Headey, Maisie Williams and Liam Cunningham called on EU leaders to do much more for the approximately 57,000 refugees currently stranded in Greece, during a visit to see International Rescue Committee programs in Greece. Earlier this week the three actors met with refugees who have been impacted by the EU-Turkey deal implemented in March on the island of Lesbos, and at two sites in the north where the IRC runs programs in protection and environmental health.

On the island of Lesbos, Headey met with a young Syrian woman traveling alone with three children under the age of 11.

Her husband, who has cancer, is in Germany. She has not seen him in eighteen months and, because the process to reunite with him is so slow and so drawn-out, she may wait another 5-6 months before she sees him again. 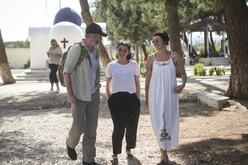 In northern Greece, at Cherso, one of the sites which has been constructed by the Greek army, Williams met a young aspiring actor, from Syria, who wants nothing more than the chance to live out her dreams in safety. Cunningham met with Afghan and Syrian fathers, who talked about their reasons for leaving their countries, the constant fear in which they lived, and what life is like for them now as they spent the hot summer months living in a refugee camp in Europe.

For me it is about the children…children with so much potential, so many hopes and dreams. Where is the humanity that makes it acceptable for them to languish in refugee camps – in Europe?

This is not an earthquake, this is not a tidal wave. This is a man-made crisis. 57,000 stranded in Greece. Refugee camps in Europe? Is this truly the standard EU leaders want to set as the way to respond to the global refugee crisis?

Panos Navrozidis, country director, IRC Greece said: “The truth about this crisis is that there are options for the family members Lena, Maisie and Liam met in Greece. There is no reason why 57,000 people should be forced to put their lives on hold.”

See updates from the Game of Thrones cast in Greece in our #RealmToTheRescue: Rescue has no boundaries Storify feature.