5th Graders Fundraise to support the IRC in NY 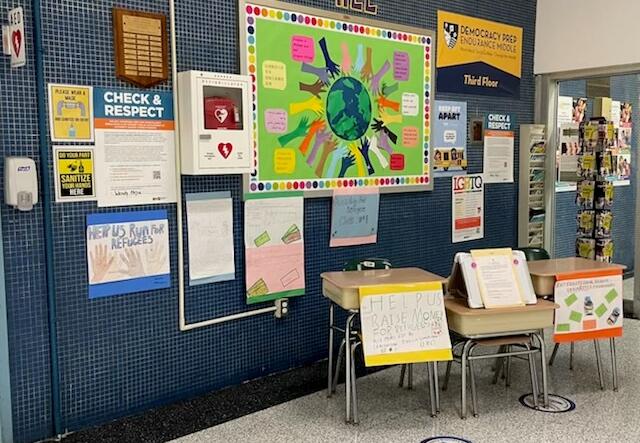 When Youth come together to fundraise, you know it's going to be a proud moment.

The IRC in NY is so grateful for the collaboration between PS 154 Harriet Tubman School and the literary non-profit Behind the Book for pulling off a one-of-a-kind fundraiser! It all started with the book Stormy Seas by Mary Beth Leatherdale, which sparked the interest of Ms.Fahy’s 5th graders. Stormy Seas tells the story of eight different refugee children. It channeled a thread of cultural sensitivity around understanding that why or how people leave varies.

The Behind the Book literary nonprofit has a strong partnership with PS 154. Throughout the years, Ms.Fahy’s students have previously made projects with Behind the Book for important topics such as food justice. Behind the Book gathers student interest by curating a selection of books for the class to decide on their favourite unit of study. Students expressed interest in learning about the refugee experience. Many of them were already aware of the experience refugees, migrants, and displaced people around their community face either through a personal connection or through someone they know.

With Behind the Books’ empath-driven methodology, the class was able to research the topic and create their own writing and art series in response to engaging prompts sparked by Stormy Seas.

Myra, the program coordinator of Behind the Book encouraged the class to imagine the fear of fleeing home and or the shift into unfamiliar and unsafe spaces. In light of the refugee experience affecting Haitian, Venezuelan, and Afghan communities, the class was determined to help fundraise for a resettlement agency and to raise awareness around these issues.

With much research and planning, they decided to graciously fundraise for our local IRC in NY office!

Soon after, the class invited their local school community members to donate to a collection container and EVEN HELD A RACE for IRC! For every lap they made, they encouraged people to donate what they could. The students went class by class in groups of two to inform other classrooms about the work at IRC and the refugee crisis that affects so many communities. They also took turns running a booth in their school’s lobby for students and teachers to ask questions about the refugee crisis and their campaign.

Myra, the program coordinator at Behind the Book, tells us how ‘On the day of their scheduled run, the kids were only expected to run a maximum of 10 laps around the school track. Almost all of the kids ran way beyond the 10 lap maximum! Talk about drive!’

The IRC in NY is proud of Ms.Fahy’s class’ stellar fundraising efforts and most of all for their determination in demonstrating a commitment to advocacy and leading the change into a welcoming climate for refugees and migrants.