In addition to health concerns during the start of the COVID-19 pandemic, many families faced dual concerns about dwindling food supplies. For those who came to the Bay Area as refugees and asylees, it was an unwarranted second wave of crisis to handle after the saga of arriving in the U.S.

Amidst this food crisis, members of the Muslim Community Center (MCC) East Bay emerged as heroes this past year, helping the IRC in Oakland stabilize dozens of families during a tumultuous year with direct donations of food and other high-need items.

“During the pandemic, MCC East Bay supported our families with emergency food assistance efforts, gathering and delivering boxes of food to families who were most in need,” said Jordane Tofighi, Director of the IRC in Oakland. “We are incredibly grateful for MCC East Bay’s support during this extremely challenging time.” 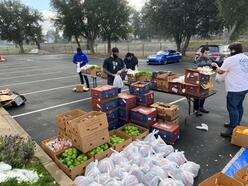 The MCC has served as a longtime partner with the International Rescue Committee, assisting at IRC events and providing donations to its families long before the pandemic. Monthly, MCC members worked to set up homes for refugee families when they moved into a new house or apartment. However, their support became particularly noticeable as the coronavirus crisis emerged.

“At the beginning of the pandemic we were struggling to keep up with supporting our families with the emerging needs they had due to the novel crisis,” said Aria Brock, Volunteer and Donations Coordinator for the IRC in Oakland.  “We knew that we needed to reorganize and reprioritize, so families had the fundamentals. MCC came along at a time when we needed them most.”

The MCC initially organized the transportation of food donations from the community. Soon, the congregation was engaging its own members to donate food directly to dozens of families once a week. 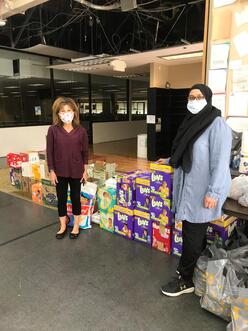 As families quarantined and jobs became less available, many clients had to be added to the MCC's delivery list with more than 200 families served over the year. MCC representatives did not mind the additional load and even started adding other fundamentals such as diapers and hygiene items to their deliveries.

Such community efforts are typical of the Pleasanton-based mosque, which has made a point of serving the surrounding community and finding space for all its neighbors for many years.

“Our conviction is driven by a community-minded approach to Islam that appreciates the many opportunities and challenges of being an American-Muslim in 2021,” states the MCC East Bay website. “That ethos is expressed daily through our many services and programs.”

As capacity and family needs have changed, MCC East Bay has become flexible in its support of families served by the IRC. That work has received notice from IRC staff.

“MCC’s generous and amazing work had a huge impact on our clients’ lives,” said Anita Kassem-Anver, Career Development Specialist for the IRC in Oakland.  “It alleviated the burden of transportation for our newly arrived immigrants and refugees. It also allowed our families to spend their limited resources on other basic needs.” 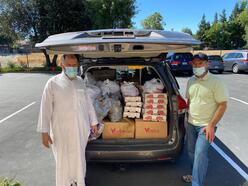 As of April 2021, more than 50 IRC families remained on MCC East Bay’s support list. Because the mosque has taken care of IRC families’ food and hygiene needs during the pandemic, refugees and asylees have been able to use their limited funding on other necessities such as rent, healthcare and children’s needs.

MCC representatives say they will continue to serve families as long as the need for food is sustained. In response to these efforts, Atefah Aghaei, Wellness Promoter for the IRC in Oakland, wishes to thank MCC East Bay for their incredible support: “I have 31 clients who have received your support,” she said. “What you do for them is not only providing food, it’s a source of hope and kindness, which mentally conveys the message to them that they are not alone. Thank you for each moment of your efforts that makes them happy and strong.”