Finding Hope in Times of Despair – A Survivor’s Story

Adilah* came to the United States in 2017 through a work visa as the maid of a diplomat. A single mother of three from a small town abroad, she hoped to earn enough to send money home to her children and four siblings. Shortly after arriving in the U.S., Adilah realized that she was being exploited. She began to receive only a quarter of her pay. Her employer forbid Adilah from leaving the home and subjected her to emotional and verbal threats, including threatening her with deportation. 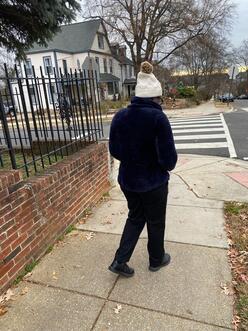 Adilah did not know where to turn for help. “I didn’t know how I could receive my money and felt uncomfortable in my own home.” She remembered the National Human Trafficking hotline number given to her when she first arrived. Feeling isolated and scared, Adilah called the hotline and was connected to the IRC in Silver Spring.

“I didn’t know how I could receive my money and felt uncomfortable in my own home.”

The IRC put Adilah in temporary and then long-term housing and provided her with clothing, food, access to health care and assistance finding a new job. The IRC also connected her to legal services which enabled her to receive a T-visa, which provides legal status to survivors of trafficking. With her new immigration status, Adilah applied for her three daughters to join her in the U.S. They arrived in November 2022 and were supported by the IRC through enrollment in school and assistance with healthcare coverage.

Since she connected with IRC, Adilah has improved her English skills and now works in a kitchen at a local university, progressing toward her goal of one day becoming a professional chef.

“I share my story because there are many like me who don’t realize the resources available to them. The IRC empowered me to endure a difficult time in my life and come out stronger and I hope that my story inspires others to reach out if facing similar challenges.“

The U.S. Department of State estimates that 14,500 to 17,500 individuals are trafficked within the U.S. every year.

If you or someone you know is a victim of human trafficking,