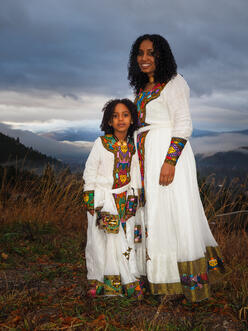 Haben and her daughter.
Photo: IRC

This month Haben, an Eritrean refugee who was resettled by the IRC to Missoula three years ago, tells us about her experience coming to Missoula. When she arrived, she spoke only a handful of words in English, but now speaks well enough to be interviewed for this story without any interpretation.

Haben's responses have been condensed for clarity.

Tell us about the day you found out you were coming to the US.

"I am so happy, but also nervous."

Haben left her family in Eritrea when she was 18 and for the next 10 years lived with friends she made while living in Ethiopia. She had a four-year-old daughter and had never lived by herself.

Tell us about your first day in the US?

Haben’s trip to the United States was also her first time on an airplane. She traveled alone with her daughter through four airports before reaching her destination of Missoula. She had been assured that there were many Eritrean and Ethiopian employees at the airports, and they would help her navigate the complicated system and language barriers. They were right! She was given food, extra clothes, and directions along the way and even stayed in touch with these new friends after her arrival in Missoula. Arriving late at night in January in Missoula was a tough experience, as it was bitterly cold with lots of snow—a first for her and her daughter. An IRC caseworker and interpreter met her at the airport and after a few minutes, Haben realized she knew the interpreter! They had known each other in Ethiopia and for the first time in several days she started to feel a little better, knowing that she was not alone.

Tell us the most surprising thing about the US.

She had been told it might be cold here, but nothing could prepare her for a January in Montana. Three years later, her daughter loves snows and even knows how to ski, but Haben hasn't fully embraced Montana winters. The pace of life in the US and how busy everyone is was another huge surprise. "Time is like gold here." People work long hours and have much less free time than she was used to.

Tell us the best thing about Missoula.

"The people, I love the people of Missoula!"

Before her arrival in Missoula, IRC staff formed a Family Mentor Team for Haben and her daughter. The team was carefully chosen to include young women and at least one other mother to make Haben feel more comfortable as she adjusted to life here. A couple of these volunteers were at the airport to greet her and three years later they are still her closest friends. They spend birthdays, weekends, and holidays together. "They are all my family now. They read me. When I cry, they cry with me and when I laugh, we laugh together."

Tell us what you miss the most.

The church is what she misses the most. In Ethiopia, Haben and her daughter went to church every day. "We prayed to come to America." Job opportunities were few and far between, allowing lots of free time. Church was part of daily life there and as much as she appreciates the warm welcome she received at the Greek Orthodox Church in Missoula, it is not the same.

Do you feel like you are home now? When did you realize you were home?

"Yes, I feel at home in Missoula."

Haben remembers an evening when she was with Bonnie, a Family Mentor, and her family in their backyard. Bonnie's dad was grilling chicken and they were all laughing together, and Haben realized that she was home.

Tell us about your proudest moment.

When Haben passed her driver's tests, both written and road. "I am so happy!" she exclaimed. She was also happy to be able to get a job very soon after arriving. She asked how soon she could start working as she was being driven from the airport on the night of her arrival. She enrolled in the IRC Matching Grant program and soon was employed at the Holiday Inn. It was the hardest job she had ever had and today is grateful that she started off there. She met other refugees from Congo and Iraq and really connected with Jaz, her supervisor. She has since changed jobs and is working in childcare.

After the interview Haben thought about all the questions she was asked and when she came in again, she said she had forgotten the most important thing that she loved about being in Missoula: "The freedom. I can do anything I want. I am home."