In September, Jenny Hart, the International Rescue Committee (IRC) in Salt Lake City’s maternal & child health coordinator, attended a Gender Equality Champion conference hosted in Nairobi, Kenya for IRC staff members from over 28 countries. The purpose of the conference, Jenny explains, “was to talk about the work that we are doing as Gender Equality Champions, to come together to get different ideas, to receive training and to problem-solve through some of the different experiences we are having.”

Many IRC offices across the United States and around the world have designated Gender Equality Champions to “have somebody…that [can] help support and move forward our gender equality commitments.”

Narrowing the gender gap and improving outcomes for all people served by the IRC is part of ongoing organizational strategic planning. The IRC continues to look at ways to strategically incorporate expanded gender equality and gender equity standards in the future, Jenny explained: “I was excited about all the enthusiasm I saw at the conference and people really making sure we have equitable office programs for not only women but also people who don’t identify as male or female.”

At the Nairobi conference, the Gender Equality Champions discussed building community, building capacity and building confidence. Participants collaborated to draft a statement about feminism, what it means to each of them and what it means to the IRC. During the discussion on building capacity, the Gender Equality Champions discussed improvements in each office regarding gender equality. Jenny shared one improvement from Utah: the IRC in Salt Lake City has expanded efforts to provide access to family planning education and services, including partnering with Planned Parenthood. Jenny’s favorite topic of the conference, however, was building confidence: “We had a breakout session that discussed gender equitable organizational culture and how to bring about organizational change. [This] is something I’ve been curious about and it was nice to have a basic overview of it before I deep dive into what that would really look like [in Salt Lake City].” 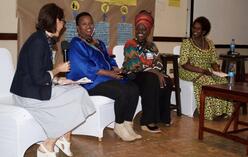 Conference attendees had the opportunity to listen to a panel discussion with the Kenyan Women’s Movement.
Photo: Emilie Linder Aiyevbomwan/IRC

One of the commitments the IRC in Salt Lake City is working hard on is improving in-office childcare resources. “With the restructure of the building [18 months ago] we did get a [children’s playroom], but we realized it really takes more than just a room to make that operational. We have set aside a child watch group, a working group, to discuss ways to make sure that it is staffed, safe and accessible for children in order to ensure that women are able to come to our programming and have their child there with them.” Decreasing the barrier of access to childcare will increase access to classes and services for refugee women in Salt Lake County.