Over the past few months, Del Draper has helped grow a small community garden into a hub for gardeners participating in the International Rescue Committee (IRC) in Salt Lake City's New Roots program.

Del, who started volunteering at the IRC in May 2021, has raised over $12,000 for the Canyon Rim Community Garden. The space is part of the New Roots community garden program that supports refugees and other new Americans to access 13 community garden sites across Salt Lake County. Through the program, gardeners grow produce for their families to increase access to nutritional vegetables in their households while extending family budgets. 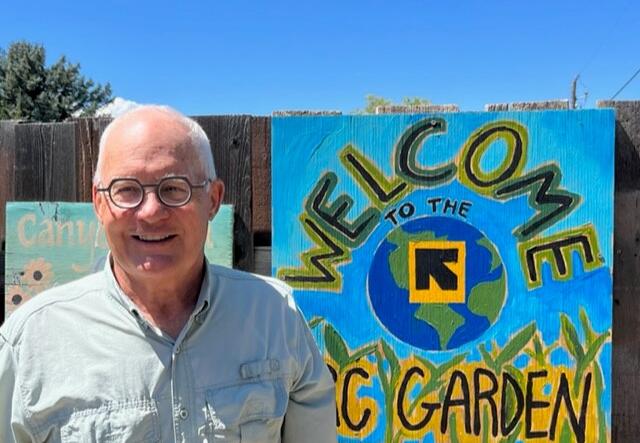 “It’s a hands-on approach,” Del said. “It’s one thing to write checks that help organizations, but it’s a different feeling when you’re working on projects and seeing the results.”

Del began planning for the garden in early 2022, calculating the budget and materials for the expansion. From there, it was a matter of finding donors to support the project, a process that Del said was challenging.

“It was tough because there are various rules about how corporations pass out money,” Del said. “We would find corporations, we thought were going to support, but then couldn’t due to restrictions.”

After donating funds to start the project, Del was able to secure additional funding from First Utah Bank and the City of Millcreek, raising just under $9,000 for the initial costs of the project.

“Securing a major donor was a very happy day - we now had enough money to move forward with the project and to start working with the volunteers,” Del said.

Work on the Canyon Rim Community Garden began in April 2022. With oversight from Del, volunteers worked on clearing rocks and building a gabion wall. After smoothing out the ground, volunteers constructed 24 4'x24' raised garden boxes, filling them with soil and weed stop as well as an irrigation system.

“It was a real feeling of accomplishment watching the wall and boxes come together,” said Del, who attended eight different volunteer workdays to complete the construction. “It’s also nice because the project is an easy concept for people to grasp and volunteers really feel like they’re making a difference.”

Volunteers worked quickly to complete work on the garden. By May, each of the 24 garden boxes had been assigned to refugee families supported by IRC's New Roots program, with some planting by the end of that month. Since then, plots have been filled with all sorts of vegetables, providing families a way to grow crops they often can’t find in local grocery stores.

“Lots of families come from an agricultural background or come from a place where they were growing their own food, so I think it carries on that tradition,” Del said.

Volunteers will continue providing ongoing maintenance of the Canyon Rim Community Garden. Looking back on the project, Del said he thought the community garden was a great program, as each family has a plot specific to them.

“Refugees are being integrated into poverty, and it can take years before they have a good cash flow,” Del said. “To have a plot at no cost to them to grow vegetables and supplement their kitchen, I’m sure that means a lot.”

The IRC in Salt Lake City is grateful for Del's efforts in orchestrating support for this project and ensuring an increased number of refugee families were able to access garden plots. Learn more about current volunteer opportunities available here »